The Gun is a Blowfish: A Review of The Great American Suction by David Nutt 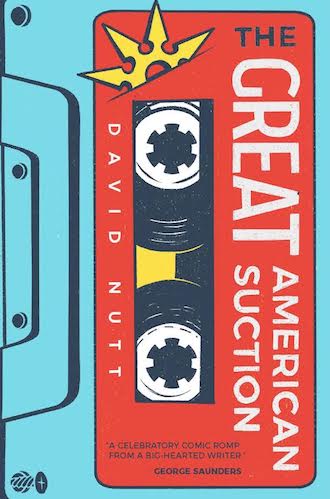 David Nutt is a singular voice in American fiction. His debut novel, The Great American Suction, published by the kingmaker Tyrant Books, centers around the misadventures of Shaker, our glue-huffing protagonist who agreeably nods through one misfortune after another in a Job-like manner and compulsively builds towering columns of trash in a nameless Ohio town. Though the novel is more farcical than satirical, Nutt channels some of literature’s greatest satirists, from the rhetorical elusiveness of Nikolai Gogol’s Dead Souls to Thomas Pynchon’s zany subplots to George Saunders’ big-hearted generosity. Furthermore, in a cultural moment where writing from and about the American Heartland is framed almost exclusively in terms of the 2016 election, this novel’s cartoonish yet heartwarming portrait is a welcome reprieve from the new tropes of that cottage industry.

Part of the joy in reading The Great American Suction is the virtuosity of the writing, which crackles with pleasure and originality. Imagine someone dumping a rainbow of Rock Pops down your gullet and the subsequent symphony of small supernovas in your mouth while lying on your back and watching July 4th fireworks light up the milky night sky – this approximates the magical experience of reading this breakout talent.

On top of this carnal pleasure for the word, are the simple pleasures of plot and character. Nutt does not resort to postmodern literary tricks. This novel is, quite simply, a masterful story populated by a rag-tag ensemble of weirdly affable characters. Never before have I wanted a book to be adapted into an animated series. And never before have I wanted anything adapted this bad. This novel is akin to masc, white trash comedy shows like Trailer Park Boys and It’s Always Sunny in Philadelphia where the slapstick idiocy of the characters quickly endear themselves to readers and viewers.

Without further ado, allow me to introduce a few key characters, each of whom could star in their own animated series.

There is Shaker, of course, our good-natured, dim-witted protagonist who speaks in brain-burps and opens the novel mowing crop circles in suburban yards as he salutes on looking homeowners, bushes, and trees, none of which salute back.

We meet Shaker’s cousin, Darb, outside a strip mall with a picket sign that reads, “Unravel the Yarn Barn Conspiracy,” and a “selection of empty cat food tins” at his feet. “Poppin’ ‘em open is like pulling a grenade pin,” says Darb, his mouth “stained a mild brown.”

We meet the Brothers Tully after Shaker rams down their door and incurs a debt that deepens before being paid off in odd jobs. The Brothers Tully control a black market of city contracts, lead an organized militia, and, later, get into the business of cleaning up disaster sites, of which there seem to be no shortage in this Ohio town where apocalyptic scenes, not lemonade stands, line the sidewalks.

The Brothers Tully, and seemingly everyone besides Shaker, are huge fans of Shaker’s ex-wife, a music performer and local celebrity known as National Sensation. National Sensation, to Shaker’s great annoyance, regularly makes headlines as she zags through music genres, moving from country-western to experimental punk to avant trash noise to a John Cage silence. While still together, Shaker performed on stage with National Sensation, bass unplugged. Their six-month marriage ended when she shot Shaker in the chest with blanks and left him a sticky note that began, “My dearest glue-sniffing spouse.”

Shaker has a nose for drugs and enjoys “VIP” status at the local hardware store where he is a connoisseur of “aisle nine.” His past indulgences include, “weed killers, sink cleansers, fluorescent cosmetics, household toxins,” “pixie sticks,” and “shoe polish.” It’s a miracle, Shaker thinks to himself, that he never glued his nostrils shut.

But a new drug from “Pennsyl-tucky” has hit the streets, and pet stores, of Ohio. Thin, Shaker’s former co-worker and fellow squatter, hands him a fish-bong and asks, “You partying or not?” “Two days later,” the next paragraph begins, “Shaker is still trying to get home.” (Did I mention Nutt is also a master of comedic timing? Throughout the novel, there are a number of dime-transitions that show off his cinematic vision.)

Shaker wakes up from this drug-fueled night, with a “spiny fish stuck in the soft meat of his elbow” and detaches it using a pair of “barbecue tongs” only to prick it back into his arm after discovering “a second and third fish dangling from the flab of each thigh.” He spies some of his work mates taking deep hits from a makeshift blowfish-bong that, when lit, “changes colors, turquoise-striped to speckled yellow.”

This new fish-drug was patented by Darb, Shaker’s entrepreneurial cousin. The operation, Darb explains, is “Nothing too illegal, at least nothing serious.” The blowfish have a “hidden toxin” that “stuns the shit out of you, makes you trippy, sublime.” Dolphins “get high off the little buggers,” he assures, “and everyone knows how whiz-clever dolphins are.” This, to my delight, seems to actually be true.

In this world, Chekhov’s gun is a blowfish. The blowfish do, in fact, blow up. Right under Darb’s nose. “Something charred and tangy enters their nostrils. Shaker and the girl smell the inferno before they see it. Darb’s house.” Buried amidst the EMT teams, smoke, and lights, Darb holds a rubber mask and mourns the loss of his overgrown, basement-dwelling son, the unlikely brains behind the narcotized blowfish operation. Authorities dub the fire a “drug-cook flambé,” but Shaker worries it was caused by his tampering with the wiring to a faulty intercom system.

The cataclysm continues when Shaker drives home and discovers he has no home. For some time, furniture had been disappearing from his house, but now it has been “thoroughly bulldozed.” Here, Shaker emerges more clearly as the biblical figure Job. Like Job, Shaker loses his home, his livelihood, and his health. At one point, Shaker says, “My head is broken…God is trying to humiliate me.” After seeing his home destroyed, Shaker, who is seemingly too brain-dead to be fazed by anything, fantasizes in his “hollow, immaculate” head, about picking up a rescued puppy and “squeezing this small animal as its adorable eyes go big and dreadful and the squirming dog explodes like a jelly donut.”

Depressed and distraught, Shaker finds a sunny spot, as he is want to do, and lays, coma-like, on the ground, relying on his neighbor for food scraps and the occasional pity-fuck, until his ex-wife appears. But it’s not actually his Ex, its a down-on-her-luck impersonator of his Ex. Shaker joins the impersonator and her partner, Royce, an elderly, tweedy vegetable in a wheelchair who the woman refers to as “Rolls Royce.” Together, the three of them squat in an unfinished cookie-cutter of a suburban home.

For the most part, Nutt writes without pretension, but the impersonator of National Sensation regrettably serves as a mouthpiece for some MFA-speak. When she says, “the only authentic act is fakeness,” and similar statements about originality, authenticity, and artificiality these are, in all likelihood, intended to be ironic, but it’s not clear one way or the other. These cheap paradoxical statements are the only timid parts of the novel and, frankly, blemish the otherwise pristine prose.

Back on his feet, Shaker returns with renewed vigor to his towering monument of trash, upgrading to a more “aerodynamic selection of trash,” and adding a drainage system that instead “nourishes a bloated moat.” “[H]e dangles twenty feet off the ground via homemade harness and pulley system, burnishing the monument’s haunches with fine-grit sandpaper.” From this elevated position, he spots a small legion of homeless “humping over the hills… in their rag tatters and trash sack ponchos, heads hooded, only the grayness of their gray hands and gray chins and gray chin stubble protruding.” His tower, for whatever reason, serves as a beacon to the homeless.

The smell of cat food announces Darb’s return. He too is working on a monument, but Darb’s is shaped like a geodesic, dome and constructed of melted and welded cat food tins. This monument does not attract homeless, but rather children by the bus-full with chaperone parents and teachers. An envious Shaker stands by as Darb’s monument wins a flurry of media attention.

But this envy quickly slides into fear as Darb begins to openly question the true cause of the fire that killed his son. The final act involves an unexpected turn toward bloody noir, the collapse of Shaker’s monument, and a visit to the E.R.

The Great American Suction is a hilarious calamity of half-baked schemes written with a verve and joy that shines through on every page. Although there are serious under currents endemic to Middle America, like drug addiction and unemployment, the characters are in no way reduced to their conditions of life. Written in unforgettable prose, Nutt’s carnivalesque high-wattage vision of a vaudeville America makes for a truly sensational debut.