I’ve listened to The Sidekicks’ latest record, Runners In The Nerved World, probably ~75x in it’s entirety since I got it. I initially wanted to review the record, but after many starts and stops it became abundantly clear to me that I couldn’t find the adequate words to accurately articulate anything toward how I felt about the record.

At some point, I think in an attempt to garner inspiration to write a review, I googled “Sidekicks Runners In The Nerved World Review.” I immediately felt confused and insane while reading the reviews, so I decided to review (almost) every review I could find on the internet of Runners In The Nerved World, as a means of supporting the record, and also because it seemed like more fun that “simply” writing a review of the record.

Here are my reviews of every review I read of Runners In The Nerved World, which is available here. 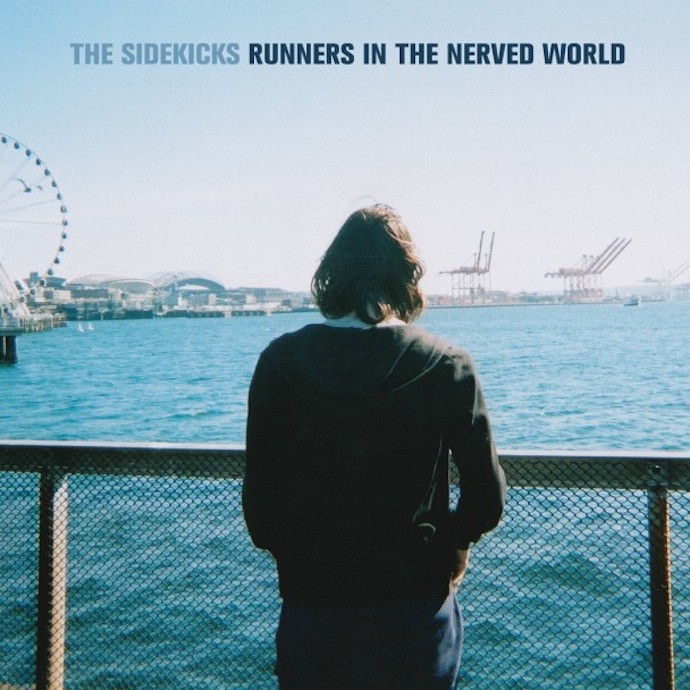 This review starts with an immediate mention of Doug Martsch (Built to Spill), James Mercer (The Shins), and Ben Bridwell (Band of Horses), which seems good for catching the ‘classic Pitchfork demographic’s attention.

Felt impressed with the rest of the first paragraph, mostly due to its analysis of The Sidekicks in the context of bands who people seem to view as sounding similar to The Sidekicks. “There’s a nature vs. nurture question going on with this style,” [reviewer] writes, “as all four of these guys make music that perfectly aligns with their natural tone-it’s suburban operatic, a small voice for big spaces, giving the outer appearance of rumpled, hands-in-pockets meekness but having an arena-ready expanse and resonance […] It’s by and for adults looking at open fields, vast stretches of highway, or commercial sprawl and still feeling trapped in their own heads.”

Really enjoyed this review, to a surprising degree, until the last sentence, which reads, “‘Blissfield, MI,’ like most of Runners In The Nerved World, is such an effortlessly enjoyable listen that you can’t miss the tension and ambition emanating from a band that’s chasing greatness as an escape from being Midwestern also-rans.”

The Maine Campus, by Derrick Rossignol

Strongly disliked the whole ‘point’ of this review, which to me, seemed to be for [reviewer] to talk about his views re the importance of “originality” in art–something I never really think about, and if I were to think about, which I did for the duration of this review, I’d completely disagree with the author.

Started to feel insane via reading phrases that don’t mean anything to me, like “more artful” and “…this is the work of musicians who know where they’re going and what they intend to find.”

Grinned imagining myself interviewing Steve Ciolek, the The Sidekicks singer, asking him, “Do you know where you’re going? And once there, what you intend to find?” with no context, in a sports commentator-style tone of voice.

Enjoyed the lack of comparing The Sidekicks to other bands in this review, which is something I didn’t realize seemed insane to me until I typed that sentence…that art critics and reviewers frame criticisms and reviews oftentimes almost exclusively in the context of other art and abstract ideas pertaining, not the art itself or the personal relationship [critic or reviewer] has with [thing critic/reviewer is cricising/reviewing].

Beneath the title, there is an italicized thing that says, “For fans of: Built To Spill, Manchester Orchestra, Look Mexico, Army Navy.”

[Reviewer] writes about the first line of the record, “How do we not get lost?” – which I’ve always hoped was “How do we not get lost?” but have never been able to feel with 100% certainty that the word Ciolek was saying was, in fact, “lost” – and calls the song “a reflective breath of fresh air that brings us to a blissful state of mind where we can find peace from finally letting go of anxiously prompted uncertainties.”

[Classic mention of Built To Spill, The Shins, and Band of Horses].

Had a feeling like the first sentence of the second-to-last paragraph, “When diving deep into the heart of Runners in the Nerved World, listeners can easily identify with standalone tracks like ‘The Kid Who Broke His Wrist,’ ‘Deer’ and ‘Summer Brings You Closer to Satan,’ especially because of their identical resemblance to both Band of Horses and Built To Spill,” was plagiarized from a review I’d read previously, but after Google searching it, it doesn’t seem to be plagiarized.

While reading this review, it became super apparent to me that people don’t seem to like it when artists “change” from the thing by that artist that [specific fan] likes the most or heard/saw/read first or whatever, and critics/reviewers seem to always mention this, but only in passing, and never in a manner that delves further in this disliking of “growth” or change in artists, which is something I feel interested thinking about more in the future.

This is the first review that mentions the Sam EP and So Long, Soggy Dog, their first full-length release, and opens with an interesting thing about how The Sidekicks changing as a band has been “the only consistent in [their] world.”

It is also the first review to mention other punk bands.

First negative review of the record. “The trio has done its damnedest to recreate a Band of Horses album,” [reviewer] writes, and seems upset that The Sidekicks cite Band of Horses as a “guidepost to the album” on their Bandcamp page or something.

Review seems really harsh, comparing The Sidekicks to Explosions In The Sky with Ben Bridwell as the singer and saying that fans of their previous work “almost certainly won’t like” Ciolek’s “cooing” on Runners In The Nerved World.  calls Ek’s production on the vocals “the equivalent of a botched plastic surgery.”

Immediately felt, via [reviewer] writing “The Sidekicks aren’t wearing their influenced on their sleeves anymore” in the first sentence, and this being a punk site, that this review was going to be negative, until a surprising ‘twist’ when [reviewer] wrote “They’ve never sounded better” to conclude the first paragraph and went on to generally praise the record.

Compares The Sidekicks to The Shins but writes “[The Sidekicks] have more verve and display greater power instrumentally” than The Shins.

Writes some sentences about specific songs that don’t really mean anything to me, before ending the review with a sentiment I emotionally relate to: “The band pursues its new direction in Runners in the Nerved World in a way that makes it seem like anything is possible, and one is never sure what might come next. Listening to it all happen is a real treat,” followed by a plug for a then-upcoming show.

The Upcoming, by Keira Trethowan

[Reviewer] gives the record 2 of 5 stars, but starts the review with the sentence “If us Brits can be summed up by one statement, it’s that we’re gluttons for a good indie band,” so it doesn’t matter.

It seems like the less ‘hits’ a review has, the more insane the opening sentence. [Reviewer] starts this one by writing: “I listen to a lot of music. A LOT of music! However, I still miss out on a lot of bands as there are only so many hours in a day I can listen to tunes!”

Criticism of the vocal production in this review seems interesting to me, via my experience (hearing the first couple singles and feeling ‘weird’ about the way the vocals sounded at first but liking it more and more). This did not seem to be [reviewer]’s reaction, writing: “It’s like listening to Dark Side Of The Moon through a $100 stereo.”

It also seems like the less ‘hits’ a review gets, the less [reviewer] for that site likes the record, which currently feels interesting to think about.

I’m not sure if this is a direct quote from someone in The Sidekicks, as there is no attribution, but it seems to be, and I felt interested while reading this: “To me the appeal of punk rock was that there weren’t any rules…..Now the word ‘punk’ has changed so much. I still like the whole spirit of punk rock, but it’s crazy to spend so many years on the road playing with so many bands that all sound exactly the same, like they are all working within this very rigid formula. A lot of our music now feels like a reaction to that, to having been around that for so many years.”

The use of double exclamation marks (!!) and double question marks (??) throughout this review seems insane.

[Reviewer] calls the record “underwhelming” in the first sentence, after mentioning the band’s sonic change over time. The second paragraph starts with the sentence, “This isn’t punk rock, firstly, […].”

I skimmed the rest of the review while feeling bored, impatient, and vaguely ‘elsewhere.’

Review of My Experience Reviewing What Turned Out Not To Be Every Review of The Sidekicks’ New Record, Runners In The Nerved World

… The more reviews I read, the more bored and depressed I became …

It felt cosmically devastating to read and re-read:

[Paragraph comparing The Sidekicks to other bands, mentioning their record label and Phil Elk]

[Paragraph containing a brief analysis, using clichés and abstractions, of the author’s thoughts on the record – usually 1-3 songs/1-3 specific lyrics]

[Paragraph containing the authors opinion ‘overall,’ then ending with either a meaningless cliché, a ‘cliff hanger,’ or information re where to buy the record]

I’d never really read music reviews before this, but it began to suck pretty bad for me.

Also, the more I listened to Runners In The Nerved World, the more personal and real it began to feel to me. It’s hard for me to know how I feel about a record–or anything, really–without an amount of experience with it first, an amount of time to feel it.