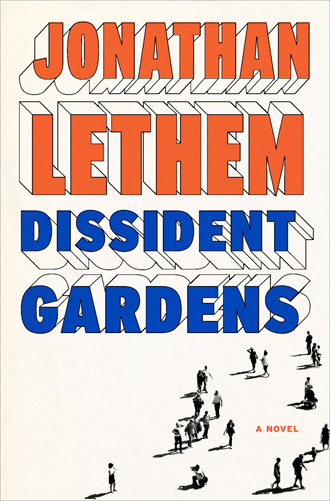 “You need a famous atmosphere or you’re bored, is that it?” So Rose Zimmer, staunch Communist and neighborhood watch doyenne of Sunnyside Gardens, Queens, accuses her teenage daughter, Miriam, after another of the latter’s flaunts in the beatnik Greenwich Village.

It’s a fair question. In the scene prior, early in Jonathan Lethem’s new novel Dissident Gardens, Miriam had sheared off a group of Columbia boys from the crowd at a mediocre coffee-shop folk concert, and led them on an expedition in search of a party at Norman Mailer’s. This echoes a scene in Lethem’s The Fortress of Solitude, whose protagonist and his cohorts ditch an also-ran punk band’s show at CBGB’s. Lethem can at times work like a historical novelist—albeit circling a very different nostalgia circuit—in the way he maps group dynamics within scenes of no small cultural import. But what’s more unique in his novels is the sense, not of fiction sneaking into history, but of the unfamous sneaking into a famous atmosphere.

Lethem is a “New York novelist,” not just because his major works are set there, but because they constitute a coherent overarching view of the city. Specifically, it’s a place where art and politics aren’t sections in the newspaper, but part of the fabric of everyday life—where there’s no clear division between you and the people you read about.  Even as Lethem has cleaned up his early genre impulses for the drawing room of literary fiction, his characters’ lives, no longer fantastical, are still thrillingly public.  In Fortress of Solitude, brownstoner dads can be experimental filmmakers and soul singers. In Chronic City, the hapless heroes (themselves out-of-work actors and alternative-press critics) gain entry to cocktail parties with internet geniuses and billionaire mayors. In Dissident Gardens, which traces protest tactics and political ideals over three-plus generations, Miriam interviews with the Freedom Riders, marches with King, protests during LBJ’s appearance at the World’s Fair, and is arrested on the steps of the Capitol Building.

Politics is the boldface world through which characters orbit as a matter of course in Dissident Gardens—and in some senses, Dissident Gardens is a commensurately “big book,” about family, and the promise and disappointment of the Left, its chronology-skipping chapters encompassing protest singers, hippie anarchist communes, Sandinistas, Quakers, queers, academic Theorists and Occupy crusties. In the first chapter, an overture of aspiration and disillusionment, representatives of the American Communist Party show up at Rose’s kitchen to expel her over an affair with a married local policeman, months before Khrushchev’s Secret Speech breaks the will of American lefties who had endured decades of Red-baiting. The first sentence of the novel: “Quit fucking black cops or you’re booted from the Communist Party.” Already that’s sex, race, radicalism, urban tensions, the demands of passion and commitment—so many issues!

But, too, “’political’ was too limited a term,” as Rose thinks in that chapter, reflecting on the heady early days of her marriage to the wealthy German-Jewish émigré Albert Zimmer, later to exile himself to self-delusion in the GDR. Dissident Gardens treats politics as what someone else, way at the other end of the novel, will call “a way of being.” Dissident Gardens is about lives animated by political belief. Lethem’s other novels have similarly been about characters animated by the stuff of life, differently emphasized—lives lived amid the urban noise of art and culture and money and power. This is consistent with how Lethem writes: he’s unapologetic about believing explicit cultural references, high and low, to be a basic component of literary realism; not just his plotting, but even his prose style, bears this belief out.

Albert is identified with his childhood home in Lubeck, next door to Thomas Mann, to “the Buddenbrooks house.” The meta-reference to a multigenerational family saga is there if you want it, but it’s also shorthand for old-world European Jewry, just as Rose’s Lower East Side upbringing suggests overt, dirty-fingernails ethnicity. Lethem bounces references, images, notions of significance off of your own mental archetypes, informed, as he is, by previous experience of culture.

At times, this sort of shorthand collage is expected to do too much of the novel’s work. The sort of folk-blues played by Miriam’s husband, Tommy Gogan, the legacy of WPA field recordings, launches Lethem into digressions on secondhand collectivism, racial politics, and musical trends; the genre’s obliteration by Dylan’s genius suggests something true about the American cult of the individual. But this riff starts to have the feel of a hobbyhorse after its first few iterations.

Dissident Gardens can feel overwritten: Lethem is always evoking. This is how he describes Douglas Lookins, Rose’s lover, caught up in NYPD and fraternal-order politics: “Walk a tightrope between a sky of distrust and a canyon of scorn and one of these days even that tightrope might rise up to form a noose around your neck, if it consisted of your fellow black cops keeping vows of dirty silence under auspices of the Guardians.”

Lethem is always on. His sentences are all torque, bent and tensed, stripped of inactive words, impact words muscling in on one another. Language is never merely functional, and rarely less than figurative; deliberate sentence fragments are breathlessly articulate. Though all this may give passages the feel of a rush to resonance, Lethem’s no-phrase-left-unturned style offers pleasures both incidental (a red-haired head bobbing up and down above the surface of the ocean, white body partially visible below, is “a forked radish in aspic”), and revelatory. His ventriloquizing narration assembles perceptions and judgments out of the materials of a worldview; the quickfire synaptic connections can light up your brain. Sergius, Miriam and Tommy’s son, growing up at a Quaker School, mixes their legacy of liberal protest with the doctrine of passive resistance through the detritus of adolescence, rereading the story of Ferdinand the Bull, and playing the arcade game Time Pilot pacifistically. The references are part of the text just as the cultural placeholders are part of life—a significant part, especially in the absence of Miriam and Tommy in the flesh.

The markers Lethem uses are also notably idiosyncratic—his 60s is not exactly NBC’s The 60s. New York’s folk scene is Dave Van Ronk and the Reverend Gary Davis; the starting pitcher at a Mets game is not Tom Seaver but Pat Zachry. When Miriam appears on TV, her fifteen minutes of fame take place on Art James’s The Who, What, or Where Game—it’s all the sort of thing that could conceivably be made up. It’s also true that The Who, What, or Where Game is the kind of real-life history in which Miriam would appear: though New York City is a continuum of the famous, position does matter. As much as Miriam and Tommy do know “Bobby Dylan” from the famous atmosphere of Greenwich Village, he never appears as a character (just as Miriam never does make it to Norman Mailer’s party).

Lethem hopscotches across B-Side milieus, rendered with a level of specificity that must be affectionate. Stations of idealism, like a New Deal proto-Kibbutz in New Jersey, or an Occupy encampment in rural Maine, give an underdog poignancy to the characters who move through them, something to do with their desire to be in sync with the forces of the world, to not be “late to the party.”

This is Tommy Gogan’s worry upon arrival in Manhattan, a place anxiously characterized, for the young songwriter in search of his own voice, by a “surplus of identity.” Fame—“enlivening fame,” “intramural fame”—sparks his and Miriam’s attraction: her life of proximity thrills him, just as his burgeoning muse does her; “I know who you are” is her pickup line to him, equally a turn-on to both.

Tommy tries out multiple identities to animate his life and art: first singing in a kitschy Irish harmony act with his brothers, then, as a solo singer-songwriter, writing a cycle of songs about the Bowery’s homeless. Lethem describes the thrill, for Tommy, of aligning himself with a political purpose, artistic tradition, and, perhaps, ethnic identity; even as he allows Tommy to be critiqued as a vainglorious appropriator. As Tommy and Miriam interview their latter-day forgotten men, Lethem gets at both the excitement and the difficulty of joining a movement.

This interactive mode of identity is consistent with the life-soundtracking of Fortress of Solitude, and the gabathons of Chronic City. But the political element of Dissident Gardens—more particularly, the leftist element—adds a layer. Lethem is plainly after something very particular in Dissident Gardens: the particular timbre of his characters’ political commitment allows him to show family dynamics, interpersonal and intergenerational, in terms of dialectics. In doing so, he has written a novel about people who live as he writes.

Lethem has Rose consider her marriage in terms of thesis, antithesis and synthesis; her relationship with Miriam certainly works that way as well. The novel’s structure, with discrete chapters tied to a particular moment but filled with backstory, shows the equally urgent claims of present and past. It is not politics, but history that is the subject of Dissident Gardens (to the extent that the former and latter can be separated, which any good Marxist would of course dispute). And in particular, personal history. Just as liberalism is always haunted by the ghosts of its failures—the Communists have the failure of Stalin, the hippies have the triumphs of Nixon and Reagan—so too are the children of Dissident Gardens haunted by their parents.

Rose, whose passion for labor manifests in community involvement and a permanent attitude of defiance, disdains Miriam’s “cloud politics,” her refashioning of political commitment for a liberated age; so too does Sergius refashion Miriam’s activism as an orphan’s endurance. (The dynamic mother as a structuring absence in her son’s life is a recurrent trope for Lethem, who lost his own mother early in life.) Each parent contains, in their child, their successor; each child’s break with their parents takes a shape informed by their inheritance as much as by their difference.

So Sergius, who sees his childhood hometown of New York City as “a holding area for past calamity leaching everywhere into the present,” takes up the guitar, and ponders on  “the transmission of the gift of music.” And so Cicero Lookins, son of Rose’s policeman lover, lectures on “transmission of affect” in a college seminar called “Disgust and Proximity,” the morning after dreaming of Rose. Lethem has a minor character repeat an old joke: “There’s always a next one. That’s why they call it revolution, right?” It’s possible to read this as a cynical disavowal of commitment, but Dissident Gardens as a whole bears out the truth of the statement, ruefully and understandingly: Every child is, in their way, a revolutionary.