Review of Allie Brosh’s Hyperbole And A Half 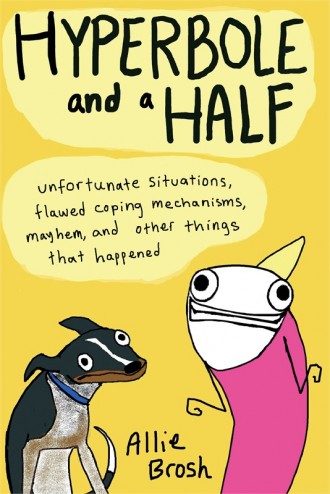 Hyperbole and a Half: Unfortunate Situations, Flawed Coping Mechanisms, Mayhem, and Other Things That Happened
by Allie Brosh
Touchstone
384 pgs/$28.00

Here it is. After all this time. The book around sixty thousand of us internet creeps have been waiting for.

Like, I can’t talk about this book without saying that I’ve come quite a way with Hyperbole And A Half. When I first started reading Allie Brosh’s webcomic, it had not quite yet become Internet Canon. It was just going viral, just becoming catchphrase, just beginning to appear on everyone’s Facebook newsfeed. Every line a gunshot of hilarity, every illustration impossibly succinct in their Microsoft Paint cubism. This was around 2010; it even might have been kind of before internet humor mavericks (like Justin Valmassoi from Animals Talking In All Caps) and adorable animals were rewarded with publishing deals for their hours of producing-hilarious-things-for-free. Back then, it was just Brosh telling stories about frustrating and relatable moments from her life: close calls with the little bags of Nope that are spiders, the Sneaky Hate Spiral, Seven Games You Can Play With A Brick.

As time progressed, the stories became anecdotes from her childhood⎯painfully funny incidents of minor disaster. These were dispersed amongst personal stories that now, in the height of Buzzfeed and Thought Catalog, could be dismissed as clickbait⎯titles such as “Why I’ll Never Be An Adult” back then somehow weighed more. In 2010 there was no screaming digital landscape of coping guides for lost Millenials, no Top Five Panic Attacks You Have Actually Had In A Supermarket, no Top Ten Reasons Gen X Hates You And Refuses To Employ You.

When Brosh announced she had received a book deal, in 2011, she pointed out on her blog that it would take a while for the as-yet-unwritten text to make it to the shelves. About as long, actually, as the shelf life of a can of peaches. And the time it would take you to listen to the complete discography of Prince, seven hundred and sixteen times in a row. This is a total contradiction of the wonderful, instantaneous world of internet publishing, but a book born of the internet still has to play by hard-copy rules. So we waited.

While we waited, Brosh began to write about her depression. Then she dropped off the internet for a very long time.

When “Adventures In Depression” was posted, I spoke later in the day to my best friend. We’d been avid fans for a while. We were blown away by how staggeringly accurate Brosh’s descriptions of living with depression were. It also might have been the first time we talked about mutually living with depression, like, really talked about it. How many of us came forth and said ohmygod, her hoodie in that post? I own that hoodie. I think there might even still be a half-empty packet of Skittles in it.

People talk all the time about attempting to normalize depression, to de-stigmatize it, but Brosh’s work was the first functioning piece of media that generated conversations I was part of where there was no judgement surrounding the lived experience of depression. In fact, it kind of let us laugh at ourselves. I’m sure I have high-fived someone about it. Like, we’re all ok if someone can make a thing that hilarious and that accurate about what we live like for months at a time. That means other people are just like us, right?

But yeah. So. Here we are, seven hundred and sixteen androgynous and sexually charged funk albums later and I’ve an advance copy of the book next to me on my desk. It took me a day to read and I both wept and laughed. It did more for me than any tragic, gif-fuelled Buzzfeed attempt at lighting the weird mire of the mid-twenties ever could.

It is a compilation of some of the old greats from the blog (including the tales of Simple Dog and Helper Dog, and “Adventures In Depression” Parts 1 & 2), as well as some outstandingly comical new work. Her parents make another appearance, as does her small sister, her boyfriend. In some ways we get a broader view of Brosh’s life, but in other ways she keeps us carefully at arm’s length. This is something I respect deeply about her work: she invites you in, but still remains an everyman, never indulges herself, never stares too long into her own pixellated, pink, black, white and yellow reflection. She is a storyteller with a crack-shot sense of timing and surprise, she’s gut-wrenchingly honest, but is not even for a moment narcissistic⎯a word that is often thrust, furiously and condescendingly, at young women writers by those who can not relate to them. Brosh is at no risk here.

The surprise element of her work is one of those utterly rare experiences where the laughter it induces is that of sheer delight. For example, without spoiling a thing, the device she uses to end “Dinosaur (The Goose Story)” made me laugh so hard I had to put my face in my hands for a little bit and then tell my husband to come in and read it, immediately, in front of me, so I knew he had experienced the brilliance of it too.

This is what these lists and blog posts about being a mess of a twenty-something intend to do. They want you to laugh, surprised by how much you relate to the moment you’re observing in their compilation of gifs. They want you to know you are not alone, like look all of us over here on the internet are just like you, none of us have a real job or a house either. Some of us haven’t even brushed our hair in three days, just like you! For sure, I see that. But I don’t feel it.

There is something ineffable about Brosh’s work, particularly her chapters on identity and depression, that make a reader feel less alone. Her descriptions of overwhelming, aggressive shame were startling in their honesty, but for the first time gave us a word to describe what bluffing your way through your mid-twenties feels like, what not-being-where-you-thought-you’d-be feels like. How examining wild, insane moments from your childhood are sometimes the only thing that can pull perspective on how surreal it is to be an adult at all. Brosh refuses to pity herself, and if she does, she draws a hilarious picture of pitying herself and simultaneously yelling at herself for it in the same breath. There is something overwhelmingly comforting about her self-deprication, something reassuring about seeing her tangents of self-delusion and defeat written side by side. The final two chapters, “I Am The Greatest Threat To My Identity” and “Identity Crisis,” cut almost as close to the bone as “Adventures In Depression.”

There is something in the genius simplicity of the illustrations too, that lends to this. The childlike nature of the drawings really scaffolds how honest the intent of this work is. Even if they took weeks to perfect, the pictures look as natural as if they took two seconds. There are certain panels I can’t make eye-contact with without laughing.

My one criticism here, truly, is that I would have loved to see “The Year Kenny Loggins Ruined Christmas” in print. Her mother and father’s laughter is the most contagious thing in the world. Google it. It’s perfect.

Then buy the book. Brosh is a queen. If getting through your twenties is a long, foggy, gross, emotionally confusing marsh, full of sticky situations and self-doubt, then this book is the lantern you should be handed on your way in the gate. It will light your way through.

Hyperbole and a Half: Unfortunate Situations, Flawed Coping Mechanisms, Mayhem, and Other Things That Happened by Allie Brosh is available from Touchstone on October 29th, 2013.