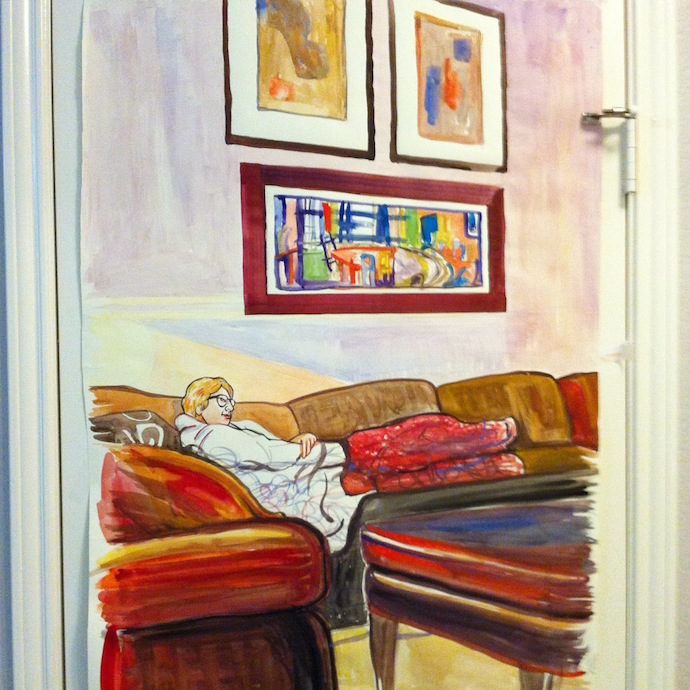 We left the French door open on the west side of the garage, by the carriage house, near the laundry. We never thought so much ahead. Trent says it’s not like we’re actually ‘bringing’ it in, not ‘making,’ not even ‘allowing’ really, but we murmur-murmur anyway.

I mean, not aloud but.

Everything is super clean and my trainers squeak-squeak against the concrete shine. Though I think—I’m pretty sure—I’m not even moving.

Abby says she likes Trent’s arms, but that she is not impressed. And she’s never impressed but I know what she means.

I flutter-shift my focus down, down and away. I blink-blink for the group. Look at the floor.

They rotate the cars here out on a schedule and polish the concrete cross-hatchily. So it’s always, like, you can lie on the floor in here and you won’t scuff or scratch your wearables, and it will match the cars I guess, which are all concept and I guess the point is everything looks virginal and un-basic, though, kind of it looks basic. And so Quentin is lying on the floor not snagging or mussing his floppy hair. Flop of hair. Hair-flop. Every once in a while, someone looks down at him and sighs audibly through their nose, like, impatient but unwilling to go so far as to make rolly-eyes. I guess, since Quentin doesn’t believe in any, you know, verifiable reality he probably doesn’t care.

But I care. I am very sensitive.

Aubrey says probably his full semantic framework for reference just differs from ours, which I think is code for new-money. Or not-enough-money. Aubrey’s kind of a bitch.

Annalise kneels down on the floor with him and says Quentin is just a little Quentin2 today and Gregory does roll his eyes because he thinks she’s misunderstanding Aubrey (he and Aubrey are twins), but really, he’s misunderstanding Annalise and Quentin just lies there trying to blink the light from his long long eyelashes. He spreads his arms out Christ-like between the wide, angled car rows and Bret scoffs and says we should get on with it already.

I squeak-squeak again, but nobody’s moved. Still there’s evening sun coming down through the skylights—here, there—and it’s warm on my sweater. I mean, I’m getting warm under my sweater, warm all over, and I realize Anka is there behind me, her crotch pressed up against my ass, breathing on my shoulder with little kitten breaths. I feel the blood rush hard and stick—warm discomfort and sputter thirst—where my dick ought to be but isn’t. She feels me tense and I feel her grin.

They all stare, multiplying. I feel Anka pull away. I’m sure her eyes widen. I’m sure she ducks her head, like, can-you-believe as she backs away. It’s okay.

I shrug. I shake my head.

Derek does that thing with his gaze, between Trent and I, like he’s so bored with the whole thing that he can barely be bothered to move his eyes from one point to another while he wait-wait-waits for something to happen. He’s all slum-scarfed and zippered ankles today, all dull black and maroon and, I don’t know, houndstooth maybe but the whole thing is looking sort of tired, sort of strained. Something about that sophomore girl from Holy Names. The one that went missing. I think he wore it yesterday.

I inhale. It is, actually, my house. Not my house, but I live here. Over there by the pit-mockup, by the shiny red and chromed drawers—empty?—there’s an old-timey coke dispenser filled with Mexican coke for me and any friends I might have. A mini-fridge lovingly stocked. Maybe by my mom. The flowing script on the machine fills me with anxiety and dread. I’m flust, teetering. Teeterpated. They aren’t leaving, are they. The ductless heat pump lets out a creak. It’s just super, super embarrassing.

They file up the stairs—some skip-hop, some drag—like an endless conveyor of acceptable types. Hundreds, thousands of them maybe, ghosting up the stairs, less than nothing. I follow. And the door stays open.

I want them to leave, but they’re in for the long stretch. They settle into the loft like they just got on shift, shuffle off to shuffle-puck, snap off bottle caps beneath countertops. A few slide around the pool table, topping stools, chalking their cue-tips between their legs so, so slowly, I stare. They’re almost-men, maybe. Almost worth attention. But attention begets attention so I join the mass pooling into the sunken seating around the entertainment center. Remantle boots but no one hands me a controller, so.

I can see the curve of Angela’s cheek peeking out from beneath her skirts as she walks behind and above me. Mike sees it too. He also thinks he’s successfully hidden his boner beneath his waistband and I’m just embarrassed for everybody. I’m about to get up, but Akiko slips onto my lap, crossing her knees into me, quivering and light. She fingers my hair, tugs it, giggling. She rests her head against my shoulder and hums. Is that her nipple brushing my whatever? I try to see how still I can be. I can be very, very still. She smells like product. I don’t lean in. I am safe. I am the stablest person in this room. My authentic self is many legged.

I am safe harbor.

Outside the window—the tops of trees, leaves like blood, mud. Out there, there are birds—scrub jays, peckers—squirrels and shit. It is fall. Out there, in the pasture, I used to walk the tops of the fences, stick in hand, the grass below me a golden sea. Amber waves, for real. I sailed oceans. Discovered continents. I led armies.

In my heart, I’m a missionary.

It takes six hours to clear the last closet. Six hours to get them all out. I drive some home. Their parents thank me. Amy throws up on the sidewalk outside the neighborhood gate. I clean her face. Amber hints she has something to trade for my kindness. I tell her it’s not necessary.

I come home and there’s shit everywhere. I put on very tight undergarments and very loose outergarments. I think somebody had sex in my bathroom. I feel guilt. Guilt muddled with disappointment. I smell my sheets. They’re black. They look fine.

I imagine all the things I didn’t earlier, all at once, but touch nothing, am not touched.

That’s how I see the shadow break across the shaft underneath my bedroom door.

That’s when I remember the French door, open, on the west side of the garage.

I swallow. Hesitate. Let it pass. It flops around the corner. I sneak from my bed. The handle is not as cold as you’d imagine. I turn the corner from one hall to another hall and it sounds just in front of me but isn’t. It’s there, I can almost see it, but it isn’t. And I’m moving. I’m almost at the end of the hall but I’m not. And I imagine its mouth of many-rowed teeth whirring. I imagine the black and the splatter of it. Imagine. It bores into their flesh, shredding mother’s skin-sack stomach, my father’s lower-back through the brace.

In the dim blue haze of those many, many windows, I see them both unmoving. It’s curled up between them, dark and slick. Eyeless it sees me. It crouches back. It opens its mouth.

Sarah Gallien raises two small children in the Northwest near a National Park and former Hudson Bay Company outpost. She studies Education. She works for the district. She cofounded and edits alice blue and over the years there’s been stuff—work. There’s more work—recent, forthcoming—in Shotgun Wedding and Asimov’s Science Fiction Magazine. I don’t know. She’s writing a novel, I guess.