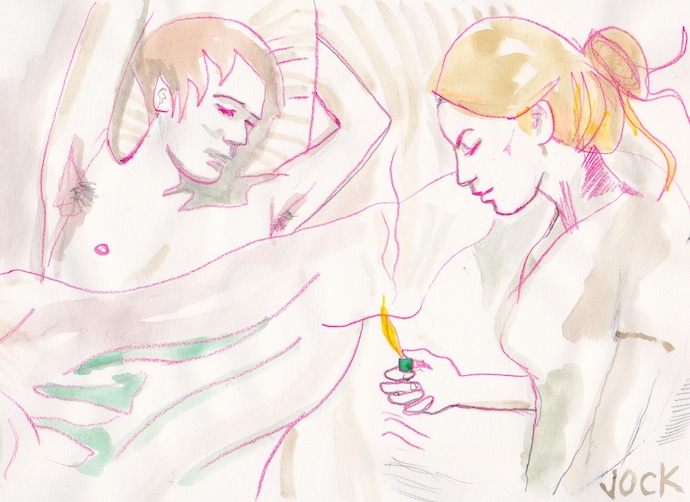 “What about arson? Fire. Have you ever purposely lit a fire?”

“No…no! I mean, not purposely. Well, once, maybe. I was drunk and I wasn’t thinking straight. I would have never, ever done it if I had not been drunk.”
“Why did you do it?”
“To get a guy’s attention. We were both drunk, and he passed out. I wanted to have sex, and he wouldn’t wake up. I felt ignored. I wasn’t trying to hurt him, I was just being dramatic. I wanted his attention.”
“So, just that one time, when you were being, in your words, dramatic?”
“Yes, but like I said, my intent wasn’t…malicious. I didn’t want to hurt him, and I didn’t.”
“How did he react?”
“He got pissed! I lit the blanket he was sleeping under. It was a blanket his grandmother had made for him, and he took my arms, and he used my arms to put out the fire.”
“Um…okay. What about animals? Have you ever purposely harmed an animal?”
“No! And I know where you’re going with this. I’ve read enough books to know. You’re going down that sociopathy checklist. I’ve never harmed any animal. I’ve always loved animals. I even volunteered at the pound when I was a kid. Wow, I actually haven’t thought about that in years.”
“Thought about what?”
“Well, there was this one time, at the pound. A friend and I, we volunteered there together. The woman who worked there, who gave us our duties…I can see her in my mind. Then I didn’t know it, but now I can see that she was a dyke, a lesbian. A real bull dyke lesbian. She had big, thick glasses. Her hair was short on the sides, and long in the back, going down into a rat’s tail. She always wore a really heavy looking L.L Bean workman’s shirt. She wasn’t very nice to us. We were volunteering, but you could tell she didn’t want us there, that she thought we were in the way. So, she put us in a backroom, cleaning shit-strewn cages, changing the newspapers. And me and my friend, we were kind of stewing, because we knew she didn’t like us, and we wanted to be doing something else, like walking the dogs, something that involved more contact with the animals, that wasn’t so gross and manual. So we were in the backroom, making fun of this lady, and I took the clip out of my hair to pretend I had a mullet, and for some reason, I put it on this cat’s tail. I don’t know why I did it. The cat went crazy. He was jumping all over the room, knocking things over, just totally going nuts, and we couldn’t get him to stay still long enough so we could get the clip off of him. He looked like a cat in a cartoon who’s been electrocuted— like he should have had big 3-D letters underneath him that said ZAPPED! So we knew we were in big trouble now, I mean the evidence was on this cat’s tail, and the room was a mess, and all of the other animals were going crazy, because the cat was freaking out. My friend and I just looked at each other. Then the mean lady runs into the room, yelling, “What’s going on in here?” and we just barreled right past her, almost knocking her over, and out the door. We ran all the way home.”
“Did you get in any trouble?”
“Well, this is the weird part. To volunteer, we had to fill out these forms, with our names, addresses, phone numbers. So I was expecting a call. And then I got home, and nothing. My mother didn’t say a word. But later that week, I see my hairclip on the counter in the kitchen. I felt like I’d been punched in the stomach. My mom still hadn’t said anything, so I asked. “Mom, where did you get this hairclip? I thought I’d lost it.” And she says, and you have to understand, my mother is really very square, very Christian, she says, “Well dear, St. Anthony must be on your side because it came back to you. I found it out in the mailbox.”
———-

Fiona Helmsley is a writer of creative non-fiction and poetry. Her writing can be found in various anthologies like Ladyland and Air in the Paragraph Line and online at websites like Jezebel, Junk Lit, The Hairpin, and The Rumpus. Her book of essays, stories, and poems, My Body Would be the Kindest of Strangers, is forthcoming in 2015.