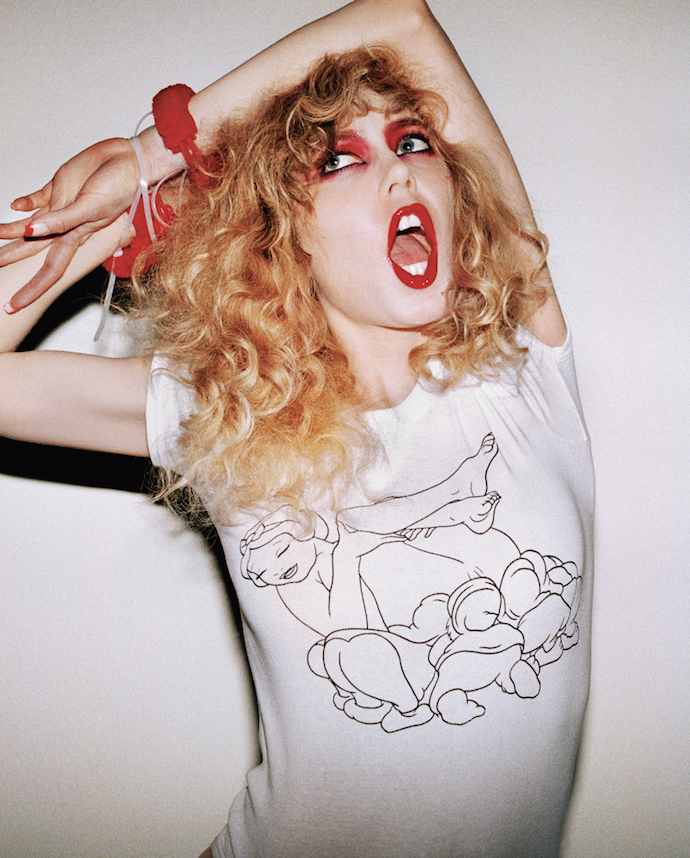 Recently, I caught up with the artist about the influences and approaches in effect in Viking Angel.

SJ:  Viking Angel has a touch of Anton Lavey vs. Jayne Mansfield Hollywood Babylon occultism. How does the setting of an L.A. Satanic coven fit with Norse mythology to create the plot?

AH:  The “satanic coven” in my movie is actually a fake movie-set created by a corrupt, stock-market, mainstream, Hollywood group. “Angel-power-beings” feed off the power from this group until they notice that one of the victims (me) hasn’t been drugged properly and the pain from her torture actually helps her to realize how much of a stupid-victim she has been. She loses herself in the murder and a sort of schizophrenic-past-life Viking being emerges. Just as this happens, an escaped convict and a rookie investigator stumbles into the situation. The crazed convict becomes a driving force, chasing her away from the danger and the cop becomes something of a romantic martyr. Long story short, it’s a demented-Minotaur in a candy store music video mini movie. Parents can call it “experimental.”

SJ:  It also has a hint of Scandinavian black metal (Lords of Chaos, Burzum).

AH:  The song “I Shouldn’t Be Alive” is inspired by ancient Norse Funerals in which thralls could be sacrificed during a funeral so they could serve their master in the next world. According to Norse writings, The Viking slave girl would be drugged by the “Angel of Death” (an old witch woman), and then she would be passed around sexually to all of the other living chieftains. When writing that song, I was visualizing this process, but also fantasizing about how amazing it would be to fight back, how amazing it would feel to snap out of a ritualistic drugging to be released from the rules asserted by men through religion. To realize that the holiest thing is only to be found within yourself. Once you realize that angels and goblins and gods and Jesuses are inside of you then suddenly, that power will make you as immortal and powerful as you need to be. Power doesn’t come from some organization or some man with his alligator-skin-pointy boots perched up on a fancy desk. Power can only come from you.

SJ:  It’s cool to see someone incorporating obscure mythology with their own ideologies and/or fantasies of outcomes within art, especially when it deals with how society plays on certain agendas of advancement promising power when they really just want to feed off your own.

AH:  As a stupid casting couch victim who discovers her higher inner self through mistakenly un-drugged pain, and using this new found positively schizophrenic power to escape a pointless existence, she consumes power that should not be hers according to a predominantly straight-male masochistic human Bible. A bible/a script/a promise of fame, it means nothing if you don’t have something inside of yourself. In my movie, the deceased chieftain is represented by the idyllic embodiment of the Hollywood silver screen. My character walks into the audition as if she is walking into a sacrifice; she is prepared for anything in order to reach that afterlife, the afterlife of Fame. She is living for a future that will bury her alive. She is intoxicated by the idea of this master, not realizing that all she really is to this establishment is a fetishized, ritualistic item. The only reason she is a “star” is because an authoritative figure sees qualities in her that make her acceptable for the sacrificial slab.

SJ:  Your cover of political-porn-pop star Cicciolina’s “Baby Love” was redone in English. The lyrics’ sacred sexuality slant plus the commercial Easter decor, sexy Jesus character and pagan ritual in the video are hilarious homage to Cicciolina. Do you feel a certain affinity to Cicciolina as an art/porn icon?

AH:  I am happy you noticed my spin on the original lyrics. “Baby Love” is one of my favorite Cicciolina songs (without even knowing what she was singing) and I also laugh out loud when I watch that performance of her singing with that dove tumbling around in her hand. She seems like the happiest porn star I have ever seen. I think she is definitely part alien which makes me think she’s an angel. In my mind an angel would be an alien trying to help us decode the message in our ancient DNA. Whatever it says, I think Ilona secretly knows! Cicciolina could possibly be a perfect strain of human. Although she might have been tainted by the situation of living in the present time, her work and the way she acts brings me to believe that she came pre-programmed in the purest way. How did she come up with those colors and that halo? She has to be an angel-alien-human-hybrid. I only do covers of songs by angel-alien-human-hybrids. Frank Tovey (Fad Gadget) was a mentally-advanced hybrid. When I perform “Baby Love” or “Lady Shave” I feel like I am channeling their alien-angel powers.

SJ:  Much like Cicciolina, you mix sexual presence with fantastical elements. What people or pieces did you admire as a child that also subconsciously helped form your own sexuality and/or creative expression?

AH:  Disney princess movies definitely tapped into my sexuality. I remember getting really turned on by Sleeping Beauty mostly when the prince is abducted by Maleficent. I truly love every Disney movie from Snow White up until Hercules (I’m not really into the Pixar looking stuff, sorry, I’ll take real animation, painted glass screens, H.R. Giger or Jim Henson over that). Everything Disney is secretly sexual, even without those rumored sexual hidden things that are spelled out in the wind in Lion King or with the hard-on minister in The Little Mermaid. That stuff is cool, too, of course, but didn’t influence my childhood fetishes.

David Bowie as Jareth the Goblin King was the first thing I masturbated to. And that wasn’t until 8th grade (I was young in school so I developed quite strangely). While other girls (who didn’t even know who Bowie was) with all their tits and drugs were making out with boys, I was flat chested and sleeping in the library. Movies and books were my makeout session late into every night. 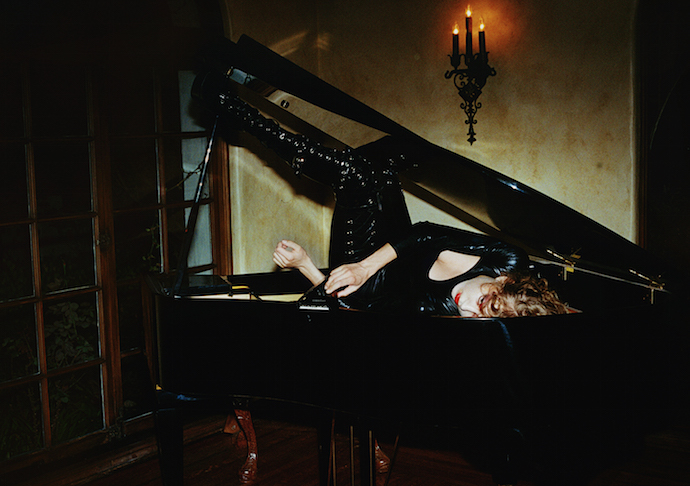 SJ:  Has the Internet affected your work as a pop starlet/video artist?

AH:  I am a very open artist, but I don’t enjoy being told “tone it down” or “do it like this.” It’s like putting blinders on a horse. Those blinders help the horse not to freak out in a human society. If that horse, by some geographical miracle, was free out in some canyons, then the only time blinders would be cool is if the horse had a sexual fetish for that… and his partner was into it. Have you ever seen that Marilyn Monroe and Clark Gable movie The Misfits? I feel like Marilyn Monroe when she is screaming at the men to let the wild mustangs go. They say she’s crazy, she’s not thinking about “reality.” But what is so realistic about turning wild horses into dog food? And what is so realistic about contracts? I have read a couple “contracts” and they are insane. A lot of lawyers, I think, are saints for having to deal with that tripe. Tripe is that stuff that Vincent Gallo forces Christina Ricci to eat in Buffalo 66, right? All of this networking is just figuring out how to swallow tripe and feel good about it.

SJ:  Do you feel any frustration being an independent artist in the current climate of record label death? Many musician seem largely dependent on avenues like Kickstarter, product endorsement via festivals, etc to fund their projects…

AH:  I have decided to put Kickstarter to bed in a coffin full of scuttle flies, but she was fun while she lasted! I’d rather find a cute old foreign man to write me out a check. I don’t mind coming over to his mansion with a few boys and girls to do his dishes in our underwear. For me, Kickstarter and going on meeting/auditions is more demeaning. I mean, I’ll do it if it gets the job done and, sure, I’d love to be on a label, but I know it won’t be fun. Doing dishes in lingerie for a rich elderly man with good kinky taste sounds so much more fulfilling. You know what he wants and he knows what you want; no pussy footing around (whatever that phrase means). And you know he would have a few 2009 bottles of Chateau Margaux and a hot tub with a city view. Demeaning yourself does not have to be so very horrible, it can be fun! Life and art wouldn’t be rewarding if there wasn’t a bit of struggle. Everything’s hard except for your dick sometimes. You can have fun if you work for it.

*All photos by Socrates Mitsios