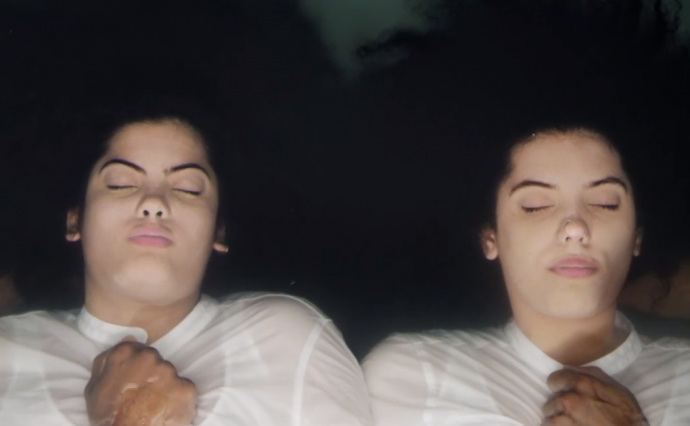 I first heard of Ibeyi thanks to their music video for the single “River.” The perspective of the video—featuring two girls dressed in white, their hair sprawling beneath them, being held down in water by two sets of sturdy arms—remains constant throughout the song, the camera never wavering or zooming out. The only motion involved is done by arms, lifting a sister up from beneath the water’s surface, and by lips, singing lines such as, “Let me baptize my soul with the help of your waters / Sink my pains and complains / Let the river take them, river drown them.” I must have watched it thirty times in the next few days.

Finally now, Ibeyi, a group consisting of twin sisters percussionist Naomi and vocalist/pianist Lisa-Kainde Diaz (“Ibeyi,” itself is Yoruba [more on this, later] for “twins”), have put out their self-titled debut album on none other than XL Recordings (home to FKA Twigs, ADELE, M.I.A. and several other kick-ass ladies) and it’s even more than I could have hoped for.

The girls work like sponges. They’ve soaked up everything in their wake, from languages, styles, instruments to traditions. That first song I heard, “River,” hit on some of their recurring sounds: Afro-Cuban beats, modern percussion tones, Lisa-Kainde’s strong, staccato-d voice, spiritual calls, and Yoruba, the language of their father—deceased Cuban percussionist Anga Diaz—and his people, a language the twins taught each other through songs. But it’s hard to even express how much more than all this the songs contain. Notes of French jazz (unsurprising, since the girls have lived in Paris most of their lives). Sounds influenced by James Blake and Frank Ocean. Songs that sound as if they’re being sung by a reincarnated Amy Winehouse or Ella Fitzgerald.

Plus there’s the language of the album, Yoruba. According to the band’s website, it’s the language of their father’s people, spread from West Africa to Cuba via the slave trade in the 1700s. It also belongs to a culture that cherishes twins, the Yoruba people holding the record for the greatest twinning rate in the world. Of course, with people come traditions; with traditions come religions; and the twins are quick to incorporate the orishas (or spirits that reflect a different manifestation of God) of Yoruban culture. The very opening song, “Eleggua (Intro),” sings praise to this orisha of beginnings and ends entirely in his own language. The second song, “Oya,” starts with horns and haunting percussion before the introduction of an echoey-break mixed with samples of the girls’ singing to Oya, the orisha often associated with motherhood, also closely linked to the Niger River and its tributaries.

Even more than they honor their family’s culture with their music, Ibeyi’s songs honor specific family members. There’s “Yanira,” which finds Lisa-Kainde’s voice climbing the upper registers, sounding like a bird to a tune dedicated to her and Naomi’s older sister who’s already passed, asking her, “Why did fate make you go/ will we meet in heaven?” There’s a tribute to their father, “Thinking of You,” which opens with samples of Cuban drumming before the girls sing in unison about the way they “walk on rhythm and think of you.” And then there’s “Mama Says,” a song with the least floating around to prove it’s autobiographical, a tune that sounds like a reincarnation of Ella Fitzgerald’s “Summertime” in which the twins plead with their mother to pull herself together after the loss of a lover.

Obviously heritage plays a significant part in what the Diaz sisters are doing on their debut, from their father’s percussion and cultural traditions to the heart-broken sounds of Parisian jazz starlets, even to the styles of fellow-label mates like King Krule and The xx. So, most disturbingly, many of the criticisms I’ve found regarding the album come from some ill-placed concern that the sisters aren’t “black enough” to join in the African spiritual tradition the way they do. I don’t remember where I saw it, but I remember the comment word for word: “It’s so nice to see Mexicans embracing their African roots lol.”

That’s got to fucking hurt. I have nothing in me I would fight hard to claim as my own heritage, but, white girl I am, even I know what it’s like to have people look at me, call me Swedish because of my bleached-blonde hair, and even when I correct them, have them mentally confirm to themselves, “No, you’re Swedish.” Obviously, this is in no way to the scale of the Diaz sisters’ need to fight for their own heritage, seeing as in their case, the group they have to prove they are a part of is a group that was hated, enslaved, captured, and brought across continents; a group that for centuries, it would be so much better if they could pass as being not a part of–and now, people hate them because it seems like they’re pledging allegiance to this group just so that they can sing their songs.

Let’s get this straight: The Diaz sisters are not a West-African version of Iggy Azalea. They are not two girls privileging off of their appearance to seduce the public only to adopt the culture to which they have no connection besides admiration. It’s not even Snookie, an adopted girl who’s taken her parents’ culture as her own. The Diaz sisters have the bloodlines of this culture coursing through them.

Does the discomfort with these two singing African spirituals have anything to do with our discomfort surrounding mixed race people? We see a face and deem it one race, maybe Hispanic, maybe Cuban or whatever, and refuse to acknowledge that no human comes from not one but two separate parents that came from two other parents, perhaps from very different backgrounds. We see a face and want to see one family tree—we want oak, elm, dogwood, not something we cannot immediately identify.

What it is that really makes this album work, even more than their beautiful voices—which, beautiful voices we can find anywhere—is the journey we see the sisters go through on the album. We see them dig deep into their history, trace their roots sonically, add elements of their own lives, elements that they’ll pass down throughout their own family trees, and create something both historic and amazingly 2015. If there’s an album this year that better reflects the way in which creation actually transpires—as a combination of heritage and vision, a pairing of where-you’re-from with where-you’re-aiming—please, show me.