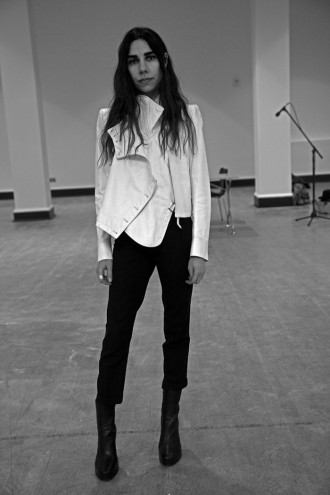 Suzie got the tickets. Suzie spent hours on the internet and phone, but she got the tickets. She got the tickets to see Polly Jean Harvey, PJ, record her ninth album at the Somerset House in London, where Suzie lives. Suzie’s not a huge fan, but I am a mammoth fan. So Suzie did this for me. She did it because she loves me.  We’ve been friends for twenty years. We’ve seen each other through marriages, illnesses, suffering and joy. I bought a plane ticket to London.

We were ushered in and Polly and her band were already going. They were clapping. All of them. About ten guys and the miniscule PJ, clapping into mikes, her vocals and other music playing in the background–an earlier track. Flood, her oftentimes producer, sat on a couch with a notebook and a pen, bouncing to the music. I was with nineteen other people, behind a two sided mirror – we could see them, but they couldn’t see us – and I immediately scooted to a place where my face was against the mirror, my body leaning against the wall next to it, my neck slightly cocked to handle this position. We had one hour, and I stayed like that the whole time.

The music that everyone was clapping to was messily mixed. This was the work in progress. Mind you, a messily mixed PJ song is a wonderful thing. But to note that––to note that it didn’t sound “done”––was a thing unto itself.

Polly’s decision to record her ninth album in an art gallery, inviting twenty people at a time to watch it, was a performance art thing. And yet, it’s still the making of an album.

Flood, her oftentimes collaborator John Parish, Mick Harvey from the Bad Seeds, and all the others, joyfully clapping, headphones on. Was I privy to something to private and amazing?

Yes. I’ve seen Polly perform eight times. But I’d never seen her “create,” although every performance is different and is a creation in itself. Still, this was different, and more intimate.

Instruments and electric wires covered the floor. A beautiful mess.

After the clapping track was recorded, Polly started to do a vocal track. It wasn’t a first take. Her voice, which I’ve heard endlessly on my headphones, multiple times in concert, never ceases to amaze. I do think that some people are touched. If you’re an atheist, then call it biological. If you believe in something else, then call it a gift from God. And on that theme, the chorus she sang was, “What God Gave You.”

I also believe we all need song, we all need to sing, more than read, write, or even think. Who was it who said that music, of all the arts, is closest to God? I know she’s worked hard to hone her craft, her voice, her songwriting, her playing of musical instruments. But that doesn’t mean it isn’t her calling.

At one point she stopped, laughing, “What was in my headphone?” And the track had to be redone. And again.

Suzie said, “It’s as if her voice just drops out of her.” That explains it better than anything. How can something so divine and powerful look so effortless?

Polly is a tiny woman. Her hair isn’t as black as it is in videos and in concerts. It’s a more natural brown. It hung down loosely, some in front, some in back, her little ears sticking out a bit and I thought, she’s an elf. She wore all black. Occasionally she sat down and Flood had ideas and they discussed things briefly. But Polly was undoubtedly in charge. In charge of a room full of middle-aged men. And she herself, in her forties. I’ve loved everything she’s done, even the things she did as a very young woman. But there is something about watching an artist at her age, at my age, do her thing, that is wildly gratifying. We don’t become more boring as we age–we become better, or can. She is proof of this.

The words “what God sent you” seemed to be the bulk of the chorus, being repeated over and over again. The song title’s and another lyric at the end of the song was “Homosapien Blues”–this is my guess, as I could only listen, no lyric sheet was in front of me. It’s a lively romp of a blues song, funny and probing. Polly often sings about God, not to mention abortion, blow up sex dolls, and well, lots of things. But I love God, I love the idea of God. I grew up in a church going family, saying grace every night before dinner. There are so many reasons I love God, but one is the idea of being grateful, always thinking Him, for all he gives us. Gratitude is a beautiful thing.

In the hour, we only heard bits and pieces, the scaffolding, the bare bones, the thing that so many people want to know about. Polly played air guitar, making funny faces, laughing. She drank water from a bottle.

It’s been a while since I cared much about how writers, musicians, or painters “do it.” There is no one  way to do anything. I’m old enough to know that.  And yet, I’d watch Polly brush her teeth. One of my favorite moments was watching her sit down and put on lip balm. Look! She’s like us! She needs to put on lip balm.

Is this some sort of need, to see our idols as human? But she opens her mouth and sings and it’s not entirely human. And then there is that. Is it that we need to know someone that is so special, so perhaps something that God gave us and God gave her something, someone who is human, but also seems like a vessel from somewhere else, from heaven, from an alien planet,  also needs lip balm?

Certain things became evident as the hour passed. One: My neck hurt from being cocked toward the window. Two: What a strange mixture work and play is. How necessary and banal the combination is.

Glitches. (I had a special fondness for the tech guy, the only young person, who had to constantly adjust the equipment). Humor. Working. Polly laughing about some “honking” noise. Adjustments were constant.

I looked around a bit when I took my eyes off of Polly. I love John Parish. I was interested to see how she interacted with her producer, Flood. All of the band interested me. But how I stared at her. And it seemed as if occasionally she could feel me stare at her, which is ridiculous. Did our eyes lock? It seemed so. But she couldn’t see me. Or was that a lie? It wasn’t a lie. The imagination is a powerful thing.

How self-conscious were they all? Suzie asked me that, and it was something that I was thinking about and seemed a natural question to the whole affair. If we hadn’t been there, would there have been more farting and swearing? Would she have been meaner? She was quite nice. But she was clearly in control, as she should’ve been. It’s her work. All those gray haired men, so talented, so seasoned, so adding to the endeavor, were working for her. They were there to help her with her vision. They knew it. We knew it. She knew it. We saw a complicated mix of joy and hard work, one without the other not being enough.

After she did some vocals, she had all the men, her band, do background vocals. They sang, headphones on. Then Polly said “[It] needs to be messier, you’re all singing too accurately.” And so, they sang again. She showed them how they should all sing very low, and she sang very low, and said, even if that’s not how “you naturally sing”. And she said, do it “with headphones off.” So they did that. The room was miked.

They all seemed fairly relaxed but focused. Is the invisible audience just a flitter, a tiny unseen presence, in and out of their attention? Or a constant thing in their minds? Undoubtedly it varies from person to person. Flood, perhaps being a producer, appeared most oblivious, most focused on the work. Musicians work in private or with other musicians, but the next task is bringing the music to the audience, to perform for the listener. Is this PJ trying to connect even more with her audience? By showing a part of the process less often shared? If so, is it out of a frustration, a feeling of disconnect, no many how many fans she has, no matter how many wonderful shows she’s performed?

As a writer, I often feel writing and reading come from a desire to connect, to salve loneliness. An attempt, sometimes feeble, to be part of the world.

Or could it be just generosity? Or both? Here is to you, my listeners, here is more of me. It’s a sort of love, this performance, the recording in front of an audience. And so I attempt to banish my self-consciousness of my fandom and embrace my love for her. There’s so much pain, so much unkindness in the world. And then there is love, there is generosity.

After all, as my husband argued here at Everyday Genius, her song, “To Bring You My Love” is about the pains she goes through to bring us her music, and share with us “what God gave” her. And that she does.