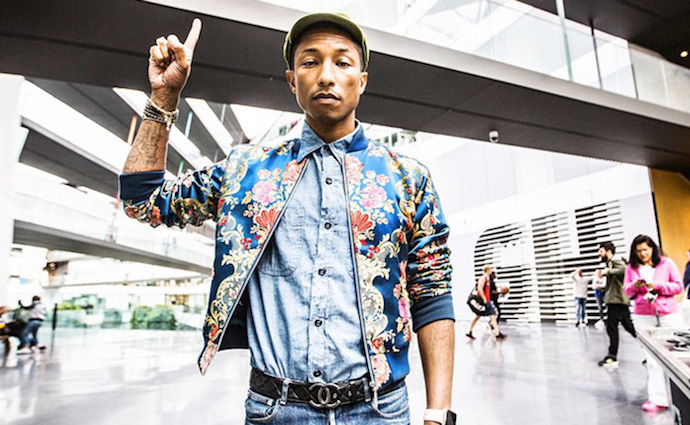 Two summers ago, Pharrell Williams had basically become a joke. His appearance in the “Blurred Lines” video–his participation in crafting that crap–made you shake your head sadly. Last year he appeared as a joke, grinning & fingersnapping his way through the vacantly feel-good “Happy,” a song so harmlessly likeable that one of the local middle schools here in town used it in a video to express their school spirit.

The first thing you notice about “Freedom” is its intensity. Musically, it’s turbo-charged gospel, just that one riff running through the entire song. The only change occurs in the dynamics–there’s no bridge; just tension & release, over and over.

The second thing you notice is the anger every time he screams the song’s title. You hear a lot of things on popular radio these days; you almost never hear screaming. And whatever anger does happen is cool and controlled, not on fire like this.

When was the last time you heard a song on the radio that insults its listeners for loving their country?

Your first name is free

Your last name is dumb

‘Cause you still believe

In where we’re from

Later, he amends that last line to ‘in everyone’ and drives the song into even darker places. “Freedom” looks nihilism straight in the eye; it dares to imagine hopelessness. And that sliver of despair is what gives the song its power–as, despite the hopefulness of its message, Pharrell sings the song with blood in his lungs, like he needs the freedom he’s imagining to exist or something horrific will happen—either to himself or to those around him.

Who cares what they see? / Who cares what they know? That use of they is open to interpretation, and its ambiguity is a strength. It could be talking about White America. It could mean the NSA. It could be something less sinister: people on Twitter talking about him, or his own self-consciousness. It might be addressed to his audience and what they’ll think of this song. I can even imagine it being addressed to people like me who want to climb inside the song and think about it. All I know is that the power in the way Pharrell sings “Freedom,” the desperation in his voice, is moving. If you don’t get chills listening to it after everything we’ve seen in the past year, I don’t know what to tell you.

The beautiful thing about pop music is that the question is almost irrelevant. Because of the song’s ubiquity—and a new song by Pharrell that’s being hyped by one of the most powerful music corporations on the planet is pretty much guaranteed to be ubiquitous—it’s going to be heard everywhere. And because it will be heard everywhere, each person who hears it will get to determine and shape its meaning for themselves. Or to put it another way: when people hear something obscure, something outside the mainstream, it’s because they found out about it through a critic, or from a clerk in a record store, or from one of their friends—they’re hearing it filtered through someone else’s context. But when they discover a song through the radio, or just through the ether, they just hear it. And because there’s no outside meaning attached to it, they’re more likely to create their own.

Here’s an example. About ten years ago Nelly Furtado had a hit song called “I’m Like a Bird,” an extended simile about how she was leaving her significant other because Nelly was, both literally and metaphorically, flighty. Even as pop it came across as a piece of fluff, something my friends and I were making fun of, speaking of condescendingly. But a few months later we were watching some MTV documentary about inner-city high school kids who aspired to be the first ones in their family to go to college, and one of the girls told the interviewer that whenever she felt like giving up she’d listen to “I’m Like a Bird” and imagine herself flying away from her housing project and into a better life. She said that the song gave her a strength she wouldn’t have had otherwise (and then MTV played the song in its entirety while we watched the girl walked around a park—an act that in its co-mingling of genuine human struggle & selling a pop record was itself more than a little cynical). My friends and I, needless to say, felt a little ashamed of ourselves that night. And I learned a valuable lesson about pop music—a listener has the power to alchemize a bland piece of pop into a spiritual hymn.

But the strangest thing about “Freedom” is it really couldn’t come from a less likely source. I mean, this is a guy who last year proclaimed himself to be a ‘New Black.’ Explained Pharrell, “The New Black doesn’t blame other races for our issues. The New Black dreams and realizes that it’s not a pigmentation; it’s a mentality. And it’s either going to work for you, or against you.’” Which basically seems to translate to, “Y’all need to pull yourselves up by your goddamned bootstraps, and while you’re down there pull those pants up too. If there’s a race problem in this country, the problem is your lack of effort.” Which is a statement so ugly & cruel in its naivete, and twisted & weird in its logic, that it makes my fingers burn to type it.

So then what got into Pharrell Williams? Maybe he’s been watching the news and he’s seen how far a lot of wishful thinking gets you when you have dark skin in this country. Maybe he noticed that his president has done everything mainstream white society could ask of a black man—a Harvard Law graduate, a family man who worked as a community organizer, someone who grew up in a single-parent household and worked his way to the top, who has practiced moderation & deference throughout his presidency—yet still gets talked about as if none of this matters. Maybe Pharrell got tired of seeing unarmed black man after unarmed black man getting killed by the police.

Or to put it another way, if Barack Obama can look at Trayvon Martin and imagine something similar happening to his son, then so can Pharrell—his son will be seven years old this fall. Maybe Pharrell realized that being Pharrell might keep Pharrell’s ass alive, but it might not do the same for his kid. And while it’s nice to say, “It’s about dreams, not pigmentation,” when there are people in this country who fear your pigmentation and see your dreams as a threat, all the positivity in the world doesn’t mean shit. Because racism will only go away when white people stop being racist. The man singing “Freedom” is taking nothing for granted. He sounds terrified. This doesn’t mean that he’s scared; it means he’s paying attention.

By any reasonable definition, US society is a white supremacist police state (not even open to debate at this point—like the confederate flag it’s just a question of whether you see it as a good thing or a bad thing—or if you’re liberal, as something that should be changed at some point but just not today). But a lot of people right now are pushing back against this, pushing for change; people who are willing to go to jail, and possibly die, in order to create a more just society. Go back and watch the video of Bree Newsome taking down the confederate flag, then turn the sound down and try to find songs that are up to the challenge of providing a soundtrack. Just in the past nine months, you can pick pretty much anything by Run The Jewels, Kendrick Lamar, D’Angelo, and Vince Staples; now add Pharrell. Add in recent books by Claudia Rankine and Jesmyn Ward and this week’s release of Ta-Nehisi Coates’s Between the World and Me, and it’s obvious that this is bigger than music. It’s a reckoning with history.

In this light, the history of America can be reduced to a simple question: whose freedom are we talking about? And the history of that freedom is shaped like a funnel. It began from the narrowest of centers and has gradually expanded because people were willing to stand up against injustice. They took the Declaration of Independence and the Constitution at face value and demanded that its promises be turned into reality. Remember that when Rand Paul, or the NRA, or Sean Hannity talk about freedom today (and they do, all the time), they are talking about an individual’s freedom, their freedom. If it were up to them, the history of freedom in America would look like a small, thin cylinder.

But every time Pharrell screams the word freedom, it’s obvious he’s thinking of everyone. And he’s especially thinking of the people who don’t have any. My point being that, for this song at least, Pharrell Williams is on the side of the angels. In the context of his pop career—a genre that, unlike hip-hop, isn’t rooted in rebellion and where political speech is rare—”Freedom” is an act of bravery on his part and for this he deserves our respect. His song serves as a reminder that pop can mean so much more than popular. And it serves as a reminder that we are living through a pivotal moment in our society, and we all have a responsibility to do our part.