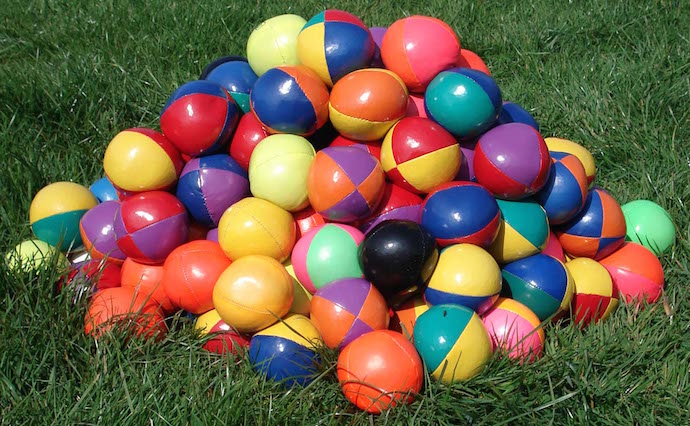 You start out with a certain number of balls which is the same as the number of persons you want on your side. I’m getting ahead of myself. You start, when you start, you’re not in or out of anywhere, you’re not on any side. I’m too far ahead, right? Shit. You start, when you start, when you’re lined up along with everybody else, you’re with your friends, let’s call them all your friends for the time being. So you need a certain number of balls, which is half as large as this number of friends. The balls, the only special thing about them is if they hurt too much, if they cause injury, if thrown, if you get hit, that’s probably bad, and the only special thing about the people is they’re friends or ought to be at this point. Okay, so the balls are lined up and the people, the friends are lined up. Shit. Somehow we have got to divide us all in half. Into teams. We have to violate this line we’ve formed here. We’ve got to sit forward in our seats, in a figurative sense, to decide, and then we’ve got to get up and move. Okay, we move, the people who are in the category of one, uh, team’s category, the yes team moves to the yes side of the line of balls, okay? The other side, to the other side, or team, or vice versa. Also, this is where it’s important to check, I’m saying this because it’s important at this point and this is the only point to do this, to check: Do both teams have the same amount of space, of physical space, on their sides? That’s when it goes from us all being friends to us having teams. When you’re checking out your turf, your team’s, it’s good to also negotiate with the other team where jail will be. I mean the jails. Both teams have jails. I’m getting way ahead of myself, here, but just do this: pick a place closeby where your whole team could line up in single file. Imagine your whole team in single file in order of who died first. I should have warned, you, shit, that might have been too scary, but I think about that, I’ve thought about that, and it’s helped me to play, I think, to be at least better at this game, and that’s fun, right? You have to negotiate with the other side where your jails are going to be, and that place is where you go if you get hit with one of the balls. The other side throws the balls, while trying not to gtet hit by the balls your side throws at them, which is what you and your friends must do while doing the same. If you get hit, you go to jail, but if you catch a ball the other side threw, then somebody from your side’s jail goes in, in order of who got out first. Oh, also, the person who threw the ball that got caught, in that example, they’d have to go to jail. Harsh. Yeah, you just keep going until one side’s exterminated. That’s why it’s important the balls don’t actually, don’t really hurt. That’s also, it’s important that when you know you’re out, as soon as you’re out, you have to go to jail. Don’t argue. There’s no way somebody can get you back in if you get out in one of those.

You want a ball that’s pretty easy to catch and throw with one hand, and also is very easy to catch with two hands, for this. You get one other person. I stand on one side of him, you stand on the other, and we pass the ball back and forth between us. The other person isn’t allowed to get the ball. If that rule is broken, the consequence is whichever of us was responsible has to take their place. Actually, it doesn’t have to be whomever you find, you found, in the middle. It could be you, or it could be me, there, starting out. The ball could be out of our grasp on purpose at the start, any of us, it’s possible. It’s possible this is why you’re supposed to try so damn hard to get the ball if you’re in the middle, the sense of this injustice. I can’t say for sure because I’m not sure when the game is supposed to end. I’m pretty sure you’re supposed to keep track of how many times you’re in the middle, and for how many possessions, but it’s beyond me the purpose of that mental toll. I think that’s part of the game’s purpose: it becomes so obvious so quickly who’s going to wind up holding the ball when we’re all too tired to run for it anymore, so forget about math. Fuck math, is the point. Okay, forget it, there’s this other one, sorry, if you’d rather, if you still want to. I think we’ve got everything, we had all the stuff, before. We just all agree on one point on the ground being home, and then pick something else farther away, and that’s home too. I stand on one home, the other guy stands on the other, and you’re between us. If you can intercept the ball between us, or if one of us fumbles, you run to the nearest home base, and then run to the other one, and if you touch the base with your foot, like step on it, then you get a home run. Nice. But if we tag you while holding the ball, or get you caught between us again, it doesn’t matter, you’re back to where you’re started. I think the only other thing is we have to agree how many home runs we’re going to play until. Otherwise, the game could never end.

There he goes, down, see, when it touches his square and then touches outside his square, or touches his twice, his square, it’s not his anymore, there. See, we move up one, his space, empty, now, up, and he moves behind us. It looks like they’re waiting for something before they start again. They’re waiting for something to happen first. I think they’re waiting for number four to turn into number three, and for the new number four to move up, like we just moved up. That’s why I’m telling you. That’s why I point it out. Like up there doesn’t know, and down here we get to watch and know. And number one is waiting to start, you’ll get to do that if you’re ever number one, it’s great, it’s why we play. It doesn’t look like he’s up to any funny business with the rules. You can get all kinds of tricky with rules as number one. You can say, Bobbling, and everybody has to bobble, it’s wrong, it becomes wrong not to, until you say so it’s not. Number one now, though, he doesn’t seem interested. I’m telling you so you can know how to defeat him when it’s your turn. I’ll be right behind you. Listen. He’s not saying anything weird like, Crab walk, but look at number two. You know how number two got there? Look behind us. Look at me. If number two gets power over the rules, you watch out, we’ve got a real troll on our hands, moving forward, what we’ve got to get past. We’ve got a spoilsport. We have to watch for the weak areas, here. Either it’s behind the left or right ankle, one of those, it’s impossible to defend against a rocket aimed there, which one it is. The old number three knew that, what did it do any good for him? Know why? The other three, they knew he knew. They might not have said so, but the rule became, Aim a real slick one six inches in back of that most special ankle. Look at him back there. Look at all the way back at the back of the line. He probably won’t get to play in this game again before our time’s finished. See his face. Again, see how number two snapped so fast at his right, his lower right? It’s got to be the other side, and now, oh, number four, see, this happens too. Number four thought he was all piss and leather, number four was dead wrong, number four let the ball touch him and then outside, number four says it’s on the line. Everybody knows what that, what we call such a rhetorical strategy. You know what? We just all moved up one, all but two of us, and maybe the line back from where we’re going is shorter now. There’s no rule about you having to go back in line. That’s nice. I like that.

Sam Virzi lives in Northampton, Massachusetts. He was the first resident at Camp Uranus, at Luke Goebel’s ranch in Tyler, Texas. He’s published writing in The New York Tyrant, Spork Press, and Hobart.