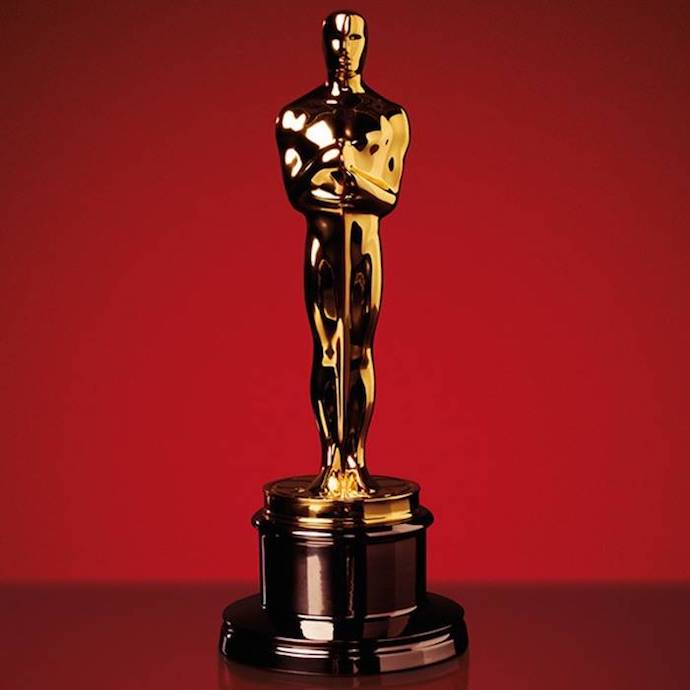 In the days leading up to the 2019 Oscars, an affair in Chicago dragooned public attention away from the February 24th award ceremony. This was, of course, whatever it was that happened to Empire star Jussie Smollett on the freezing night of January 29th, arriving in Chicago (where the often garish, but addictive TV melodrama is filmed) and deciding to go out again at 2 AM for some snacks. What happened at that moment is still of much debate, and we don’t have much visual evidence to suggest anything one way or another. There was that one still you will have seen of two figures alone on a mall-like plaza, conferring or merely shivering, plotting or celebrating in their minds all the pleasures a promised $3500 might bring them.

When I was a boy, down-on-their-luck stars were always being exposed for staging their own “kidnappings” or disappearances—though time has been kind to the reputations of some. I understand, for example, that Frank Sinatra Junior was actually innocent of conspiracy. In the Smollett case, maybe we’ll find out the truth; in the meantime, the horrifying episode will go down and popular imagination as the best Empire episode never filmed. I see it as a sequel to the Lee Daniels-directed premiere, in which Jamal Lyon calls shame on Lucious for folding him up like a deck of cards and dumping him as a child into a trashcan. The little boy was being punished for the crime of wearing his mother’s high heels–or in more general terms, his effeminacy. We will be speculating whether viewers who saw that episode began thinking about how they could make it happen in real life, or whether the actor internalized the damage done to his character, sat on it for a while, orchestrated its build and grow, and unleashed a comparable atrocity.

Last year’s ceremony was pretty good on the Oscar front, but I came away with the bad taste in my mouth because I didn’t care for the four acting winners. They all posed afterwards backstage, and I cast a cold eye at the resulting imagery. These are the kind of the kind of Oscar-winners, I steamed to myself, that make people prefer the People’s Choice awards! It’s this useless striving for “Quality” that that gives the Oscars their bad name. That and their fetish for giving the Oscar to people (mostly men) who are playing a real-life person! Somebody said that 11 of the last 15 Best Actor Oscars were won by bozos playing real people–people like Gandhi and John Glenn and Cheney. Last year, Gary Oldman carried away the prize for his work in Darkest Hour—see, you don’t even remember it, but I do, the worst movie of 2018. (He played Churchill in it, Winston Churchill.) The truth is there have been no good biopics since Sidney J. Furie’s Lady Sings the Blues with Diana Ross.

Another hard truth Oscar viewers will have to face is that the year’s four best movies got a total of zero nominations—ah, maybe a couple in minor categories nobody cares about. I’m talking of course about 1) Crazy Rich Asians; 2) Mamma Mia! Here We Go Again; 3) that movie with Anna Kendrick and Blake Lively, with so nondescript a title it doomed the movie; and then 4) Bad Times at the El Royale, a Tarantino pastiche with more wit, better acting, more emotion, and a cleverer mise-en-scene than any actual Tarantino feature since Jackie Brown (1997). Going to the movies was great in 2018, but you wouldn’t know so from the pictures that got nominated nor the performances. People applaud Emily Blunt’s versatility: in the same year she was quiet in a quiet place, then later sang rather quietly in Mary Poppins Returns, but where are the articles lauding Henry Golding’s total triumph as two very different sorts of sex god in two of the best pictures of 2018?—one of them is Crazy Rich Asians, and in the other one he plays the husband of Blake Lively.

Remember when the Academy announced that there would be a new category of the best popular picture? It seems to be their way of countering the continuing disaster of sinking ratings. But as many have pointed it out, it’s not just the Academy Awards that can no longer maintain the ratings they once showed. Every awards show suffers in this way: every television program captures only a tiny share a total audience. The Super Bowl isn’t a sure thing any more even with Tom Brady. There are just too many shows to watch; when you can binge on Mosaic, I Am the Night, or True Detective Season Three, even I, an addict who’s watched the Oscars since Anne Bancroft won for The Miracle Worker, sometimes wonder why I continue.

This year it was the promise of no host, after the debacle of hiring Kevin Hart and then dumping him once he wouldn’t apologize enough for past homophobic remarks. How’s an Oscars with no host gonna work? I wondered. Well, put the question backwards and ask how the Oscars with hosts works. Turned out it went fine—the no host thing. Presenting the award for costume design, Melissa McCarthy and Brian Tyree Henry became the best Oscar mindfuck since the day the late Marlon Brando arranged for Sacheen Littlefeather to decline his Godfather Oscar for him (it all made sense, radical sense, back in 1973). But Littlefeather’s simple Apache buckskin dress made her seem sincere, while McCarthy’s and Henry’s satires on overwrought presenting outfits were grim—terrifying even—but so funny. Every time I close my eyes, I see McCarthy valiantly try to keep control of the red envelope while a vicious bunny attached to her skirt repeatedly attempts to bite it open. It was later pointed out that this piece of business might’ve been an allegorical retelling of the 2017 affair of the Price Waterhouse envelope that came into Faye Dunaway’s hands and led to the four-minute reign of La La Land as Best Picture instead of the rightful heir, Moonlight.

Then the death of Stanley Donen two days before the Oscars filled me with brain cogitations. Donen had a curious career; some movies of his look really great today, some will remain classics forever, some were stillborn fiascoes from the word go—Kirk Douglas and Farrah Fawcett in Saturn 3; Mitzi Gaynor, Yul Brynner and Noel Coward in Surprise Package; Jayne Mansfield in Kiss Them for Me. If there’s ever milk you need to curdle, show it a few reels of Liza Minnelli in Donen’s Lucky Lady (1975). Well, the “In Memoriam” clip in tonight’s Oscars left Donen right out of the running, presumably in the interest of making more room for recently dead publicists. Bette Midler, one of my favorites from childhood and more recently Dolly Levi in a Broadway revival of “Hello Dolly,” sang a lovely rendition of the inane Mary Poppins ballad, “The Place Where Lost Things Go,” and at our Oscars party people whispered that Carol Channing had likewise been left out of the “In Memoriam” sequence on my childhood favorite’s say so.

What else did I fail to hear during tonight’s telecast? Bohemian Rhapsody won four Oscars, and some winners gave interminable speeches, yet I don’t think Bryan Singer’s name was mentioned once, presumably on studio orders, after the director ruined his career by giving too many poolside parties for under 18 talent. The best actor winner, his name often linked to Singer’s, gave a touching talk about how improbable it was that he wound up playing Freddie Mercury, being not of the same country, nor of the same sexual preference, and closed his remarks by assuring his Award season flame, the enchanting Lucy Boynton, that he’d quite lost his heart to her, just as to Freddie, the enchanting Mary from the dress shop Biba (played in Bohemian Rhapsody by the enchanting Lucy Boynton), was the girl who inspired his hit track, “Love of My Life.” I almost believed Rami Malik, and yet this was one trick too Pirandellian even for me to swallow.

After all, I wasn’t born yesterday, as I’m sure you are quite convinced just by reading this article and counting how many times that Bette Midler’s name was mentioned. But come on! I happen to be among those who love love love the “girlfriend” of Bradley Cooper (I believe her name, or one of her names, is Irina Shayk), and even more so since she gave birth to his one year old daughter and named her Lea de Seine Shayk Cooper. For the first five years after leaving Russia, she was the girlfriend of famously girl shy football star Cristiano Ronaldo, from Portugal. But what do I care who’s playing who? My dad used to say he didn’t care what people were doing so long as they kept it off the street and thus frightened no horses. The way I see it is that Bradley Cooper was playing a fictional character and Rami Malik a real life person, and that’s why one got the Oscar and the other didn’t. Rami Malek was widely praised for having his mouth artificially widened to replicate the way political and religious refugee Freddie Mercury came from Zanzibar with the same number of extra teeth. People appreciate that attention to detail–the more similar you are to the real-life person you’re playing the more points you get. In the case of the best actress, again, Olivia Colman beat out not only Lady Gaga but Glenn Close, because neither of the runners-up were playing real people. (Next, Colman takes on Claire Foy’s old part on The Crown as Elizabeth II, and people will be remarking on how regal she is.)

Spike Lee had his actors play real people in Blackkklansman, but only the white cop, Adam Driver, got nominated for anything. Why? The answer is one word long, and it’s spelled racism. All night long we argued over these issues but agreed on one general principle—that Spike deserved something. No wonder he’s a hot head who bolted the auditorium when Julia Roberts handed the Oscar to the (we counted 51) fifty-one people representing Green Book. I keep wishing that Jimmy Kimmel—finally, the missing host‚ would call out, “Julia Roberts, you’ve made a mistake–the real winner is Crazy Rich Asians!” Or maybe the sequel to Mamma Mia. But even when that didn’t happen, we still thought it was a great night for the Oscars, except for Carol Channing’s being disappeared.