On The Wild Life 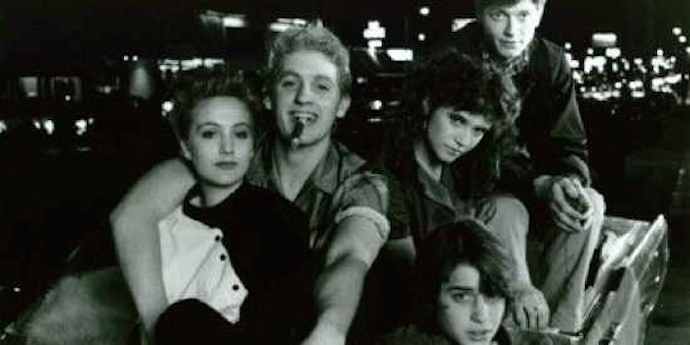 Took me 30 years, but I finally saw The Wild Life from start to finish. (35mm print at the Nuart last night) I remember when this film opened at the Mann National Westwood in the summer of ’84 and played for about a week or two to an empty house before vanishing and being replaced with “Garbo Talks,” which also only lasted about a week. I started working at that theater on the last day of the movie’s engagement and was about the exact same age as Ilan Mitchell-Smith (Weird Science), a character I now realize I identify with since he dressed the same way I did then (military fatigues, boots, etc). Of course I didn’t look as good as he did, anyhow I think that was just popular ‘teen rebel’ garb then as was the ‘sweater or jacket around the waist look’ which Mel Gibson made look so good in Mad Max III and Emilio Estevez in Repo Man.

Ilan Mitchell-Smith, who by the way completely dropped out of the movie biz sometime in the late 80’s/early 90’s, is now a professor of English and carries a BA and MA in “Medieval Studies” of all things (I may need to consult him about my Ancient Ireland film). The movie also co-stars Jenny Wright, the incredibly talented etheric rebel punk beauty who many remember as the girl from The Wall or Near Dark or that poor girl Rob Lowe ‘wham-bam thank you Maam’d’ in St. Elmo’s Fire, leaving her high and dry with a kid…or the short-lived 1990 TV series Capital News, which nobody remembers, including myself because that show is completely lost and forgotten and I never even saw it. In fact I’d never heard of it until 5min ago, I don’t even know why the hell I mentioned it. Wright also dropped out of the acting world in the 90’s due to a slew of drug and alcohol problems. From what I’ve HEARD anyway. Both Ilan and Jenny are on Facebook so I don’t want to make any incorrect assumptions…I mean how do I know what happened? When a person gets older the offers shrink and I can imagine it becomes increasingly difficult to put up with the nonsense after you’ve hit the top for a short time. She’s a pretty rough and tough looking gal these days living in a trailer home somewhere out in the desert with a rugged muscular tattooed male partner who does not seem like the kind of person you’d want to tangle with. So the last thing I wanna do is get Jenny Wright or Erin Moran angry at me!

I can certainly see why The Wild Life flopped, it’s really just not very good despite all the talent involved, somewhere something went wrong with this film and its fault is probably mostly script-related. I don’t know if Cameron Crowe’s script was rushed, or changed or tampered with or what but it feels lacking despite all the ingredients being there. Director Art Linson is mainly a producer also known for publishing a couple of harsh books about the producing biz (Bitter Tales from the Hollywood Front Line), whose interesting filmography suggests someone I would like to connect with and could or would or should potentially be producing one of my films. (But then every poor slob filmmaker wants that, the reality is always entirely disassociated from such things).

I can still remember peaking my head in the theater on that last day of the film’s showing (late Sept, 1984) with about three people in attendance, watching the scene of the cop car exploding on the street, hearing the 4 channel mix out of the newly installed Bose THX surround speakers and thinking to myself, “Wow, this does not look very funny.”

In the coming weeks during Garbo Talks and Body Double I was working matinees taking breaks watching the films from the back of the theater, living on Nachos and popcorn messing up my uncomfortable polyester Mann Uniform with cheese stains. But they were fun and exciting days. I was young, eager to make films, full of ideas, meeting big stars and directors working behind concessions. I can remember chatting with Ron Howard about Cocoon while he was still shooting and how excited he was about it. And Peter Weller about Buckaroo Banzai, a super cool guy. I was in the right place at the right time during the last hurrah of cinema before it all plunged. Unfortunately all those fervor’d dreams of big breaks and success never materialized and 30 years later I’m essentially in the same place.

Poor Chris Penn, he had talent and ended up sort of ballooning up and eating himself to death in the end (again from what I’ve HEARD anyway). A friend of mine who was his neighbor in Santa Monica said he used to see him walking home from the grocery store carrying oversized bags stuffed with Oreo cookies, potato chips and soda and mentioned he seemed morose and miserable much of he time. I can understand this. Ultimately, for many of us life does seem to arrive at the same place Chris Penn ended up at.