On Of Being Dispersed 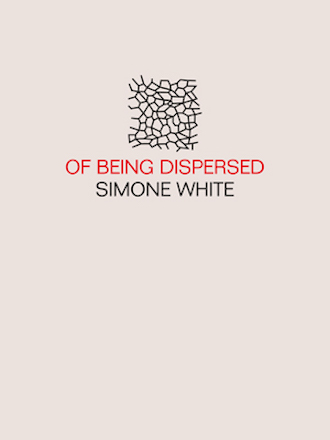 Of Being Dispersed
by Simone White
Futurepoem
75 pp

In a post titled simply “No” on the Harriet blog, Anne Boyer argues that poetry can be a kind of refusal through silence, immobility, and transposition, that “[s]aying nothing is a preliminary method of no.  To practice unspeaking is to practice to [sic] being unbending: more so in a crowd.” Simone White’s second full-length collection Of Being Dispersed is not a silent book. Yet through its superabundance of commentary, inquiry, curse, account, description, and complaint, the idea of dispersal, of making oneself dispersed, becomes a means of refusing to be constructed as a stable subject.

Several stanzas later, the speaker rejects “the possible presence of occult phenomena,” “[n]ot because they are not real, / but because they are.” These phenomena are identified variously as “[v]oices of the dead” or “shamans,” but these images also imply a hauntological intrusion history[1]. If the historical archive often operates as a device to fix social subjects in the framework that it projects into the present, the speaker’s refusal to be haunted is a refusal of the law of the archive[2].

The last refusal in the poem takes the form of nonproductive expenditure, waste, and decadence: “I would like / to take a room in this hotel for weeks on end / and pretend I’m dead. I should drink champagne // and refuse help, then move to another hotel. Perhaps, / the Beverly Hills.” The speaker enacts a refusal of capitalist productivity, of use-value, of sobriety, and of life whose processes mark and sort the bodies that pass through it. The pretend death signifies a more radical kind of dispersal in which the speaker not only rejects her legibility as a social subject, but removes herself from public space altogether[3].

Throughout Of Being Dispersed, the concept of dispersal wavers between an effect of structural pressure and an act of refusal of the stable subjectivity that makes those pressures effective. “Was a Flat Breast Plate” seems to describe the former. The poem opens with a diaspora, “[w]hen everyone was moving to Prague / When everyone was moving to Fort Green / Was colored and that was complete / Reversal of the circumstance of circumference.” White’s complicated syntax locates the speaker in the implied subject outside of the circumference: “Encircled     The circle was of being dispersed / Of trying to live.” Here, dispersal results from circumstance and is reduced to survival.

The sense of dispersal as possibility can be found in “Song Cave,” which catalogues the body in what might be a pelvic exam. Thematically, the figures in the poem might seem to lack agency, in lines like “someone complains of barrenness / she is spread apart     marks the progress of     feminine disease.” However, the form of the poem refuses the hierarchical system of the catalog through its visual dispersal across the page. At the end, the poem is left open, refusing containment in favor of dispersal:

press your black fanning bones into fabric     receive an evidence

entire and open of hinge,

The final comma pivots the poem abruptly into the next, while causing the reader to catch their breath on its hinge and evoking openness as a condition of possibility in language, if not in the body.

Dispersal also provides a way for the speaker to negotiate public space and the market, perhaps in a similar fashion to the flâneur. The secret power of the flâneur is the ability to move inconspicuously through the crowd and fluidly through the marketplace. In “Preliminary Notes on Street Attacks,” the perception of a fixed subject precludes this type of frictionless movement:

told me last week not to roll my eyes at her

This passage emphasizes the racializing gazes which construct public space. The interesting gendered distinction between “being eyeballed” and “roll[ing] my eyes at her” establishes a dialectic of provocation and dismissal, exposing another way that public space structures encounters between bodies. Dispersal returns at the end of this episode, in the form of “my blackface drag / inflected so almost no one // can read it anymore.” If power focuses most easily on legible bodies, the multiple performance of “blackface drag” discomposes the idea of a stable self around the speaker. Of course, illegibility is not the same as invisibility and the speaker is left to “swear on this stack of doodoo / on sight I am a unified person.”

In the lyric prose passage titled “Lotion,” White turns her attention on the market-relations that occur in private space. Instead of the gaze of other shoppers, here it is the desires manufactured by the market that interpellate the speaker as a subject: “Lotion is a palliative. What does it correct? It corrects ash. What is ashiness? Ash is a gray track of evident decay, most striking in contrast with darker skins, brown skins, tending to black.” “Lotion” continues to detail the speaker’s astringent cosmetic practices, foregrounding what Lauren Berlant calls “cruel optimism[4].” Ash is also a product of physical labor, as the speaker’s mother later points out, locating the abrasive self-maintenance between the exigencies of economic survival and the aesthetic desires created by the market.

“Lotion” ends with a simultaneous recognition of these structures and reclamation of the body: “I maintain dominion over the crevices of myself, deep into the layers of my skin, which must never be questioned. Never doubt that these crevices extend toward an infinitely receding boundary. Come close to me to feel it.” The subtle ambiguity of White’s syntax leaves this claim unsettled as to whether it is dominion or skin that is beyond questioning. Like the purportedly complete social subject that it signifies, the body itself is asymptotic, an infinite series of layers that can only approach the limit of itself. This is stratification in the mode of Deleuze and Guattari: “Strata are acts of capture, they are like ‘black holes’ or occlusions striving to seize whatever comes within their reach. They operate by coding and territorialization upon the earth; they proceed simultaneously by code and by territoriality[5].”

While “Lotion” engages with literal skin, Of Being Dispersed also seems interested in a more general idea of a membrane between word and world. In “Metaphor for the Changing Season,” for instance, the title suggests a kind of romanticism which is then deferred by circumlocution:

All I was thinking or would ever think was happening in a closet. I could never be joined there by anyone but you. You and you and I were all there was. The enfolding thing, to pulsate. Parts broke off and spun away. We were capsular or corpuscular in terms both of destiny and lack of destination. Parts broke off and I looked to you to see if thoughts had been had by anybody.

Images of containment and enclosure in the first two lines seem to cause the doubling effect of “you and you and I.” These discrete pronouns then meld into a kaleidoscopic “we.” Here, the act of enfolding the speaker and the addressee generates the contradiction of being “capsular or corpuscular in terms both of destiny and lack of destination.” This new assemblage is capsular in the sense of encapsulation, but simultaneously corpuscular, free-floating, capable of crossing membranes, destined without destination.

The literal and figurative membranes throughout the book often enact this unresolvable contradiction. In “Waters,” the speaker’s body is again involved in a relation of being both inside and outside: “waters roll off me // they ride me or I ride them     it is a complexity // whether one is being // done for or doing in your element.” At other times, it is descriptive language itself that creates a sort of impermeable boundary: “Who can give     an account of occasions / Can     mechanized description so falter / Can move toward gesture to scissor the outline.” Despite the book’s New York School loquaciousness, moments like these inject a breakdown into description and bring the reader back to the level of the body. Nevertheless, even a gesture can only sketch an outline. The closer the eye approaches, the grainier the image.

As its title indicates, Of Being Dispersed is not reducible to a single state of being. White’s notion of dispersal is appreciably elusive, neither completely positive nor wholly negative. Instead, it is a condition of possibility, a reminder that it is difficult to apply power to a dispersed subject, rather than a stable and categorizable one. Anne Boyer writes, “[p]oetry is a sometimes a no.  Its relative silence is the negative’s underhanded form of singing.  Its flights into a range-y interior are, in the world of fervid external motion, sometimes a method of standing still.” Silence, singing, stillness, activity, being, dispersed: “what a relief to be nobody and hold your hand in the middle of the night / when the heat coming from inside me and the klonopin knotted together / are making me real uncomfortable and has been there all this time.”

[1] Jacques Derrida articulates this concept in Spectres of Marx: “Each time it is the event itself, a first time is a last time. Altogether other. Staging for the end of history. Let us call it a hauntology.”

[2] See Michel Foucault’s definition in The Archaeology of Knowledge: “The archive is not that which, despite its immediate escape, safeguards the event of the statement, and preserves, for future memories, its status as an escapee; it is that which, at the very root of the statement-event, and in that which embodies it, defines at the outset the system of its enunciability.”

[3] Anne Boyer: “death is also a partner to refusal, as in mostly not the best option, but an option nonetheless.” Of course, this is only a pretend death, but it still allows the speaker to enter a space of decadence and refusal.

[4] In Cruel Optimism, Berlant defines the term as “[a] relation of cruel optimism exists when something you desire is actually an obstacle to your flourishing.”