On Distance and Departure: A Review of Spencer Madsen’s You Can Make Anything Sad 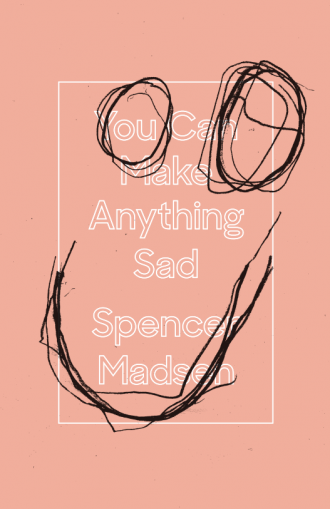 You Can Make Anything Sad
by Spencer Madsen
Publishing Genius
$14.95 / 90 pp.

You Can Make Anything Sad captures gradual melancholy that is difficult to detect or articulate, but inevitably reaches all of us. Sadness is not necessarily dramatic. Often, it is calm and disappointing, even speculative. Watching snow descend outside his window, Madsen identifies with the heft the branches are forced to bear and is hurt but not surprised that, inevitably, change/time/cold will reach them entirely. We do not fall out of love in any one moment. Though it can be possible to pinpoint a specific day or moment or cause, we feel loss as distilled across time and experience.

Madsen’s poems transmit a sense of intimacy and coincidence structured together as a series of journal entries and colloquial lists; they oscillate between interiority and everyday encounters. The book is a chronological account of a waning relationship interrupted by the speaker’s reflections, asides, and what occurs on the outside world. There is an acute bleakness: the heartbreaking accumulation of minutiae that comprises lives and stories and self-obsessed states through which we often perceive them. “This is my real life,” the author reminds himself numerous times throughout the collection (sometimes, in different words).

I am reminded of Joshua Beckman’s “[Lying in bed I think about you]”: stale air is a synecdochic representation of a stale relationship/world and is used to describe something becoming less vivid and eventually lost. Also, of David Berman’s poem “Imagining Defeat,” which is also about departure and the mood that follows it or surfaces when it is remembered.

I remember the feeling of winter coming.

The word elliptical comes from the shape of an elongated circle. It is also is a poetic term: a way of speaking that moves towards clarity and concealment at the same time. The technology of an elliptical machine allows us to run in place, as if we are moving forward and around, without covering any “actual” distance. There are buttons to change the shape of the circle, so it distends in different directions, to emulate various running conditions, speeds, and landscapes.

This is a familiar place—this feeling: the illumination given off by cold, human fixtures, like in a waiting room or a Fed Ex shop late at night. Somewhere machines light up and stir to remind us they’re doing a job. The dim glow of machinery fills a room, trying to imitate sunlight. I have no idea what Spencer Madsen’s gym routine entails. I kind of ‘get it’ though, or feel like I do. I think the best books can do this; they make a world feel foreign and familiar at the same time. Something about You Can Make Anything Sad— its content and physical character, I think—seemed too stark or honest to deface. Without thinking, I strayed from my post-it-note-commentary policy once reading Spencer’s book, marking in the margin below the line “It’s hard to imagine anything but Tuesdays everyday.” my own words, I know what you mean and I also don’t. I think that’s how it is between and for people.

As a reader, I have a hard time “rooting for” or sympathizing with the speaker’s malaise when, despite his keen ability to perceive his habitual use/abuse of others, he displays little remorse or desire to change his ways. This is to say, I think “Tuesday, January 23, 2013” illustrates a great departure from the behavior depicted before it.

I do not think it a coincidence that the speaker reaches the conclusion that he is “a destructive thing on this earth” and has inflicted pain on other people at this moment. It begins – what a psychiatrist might deem some kind of emotional breakthrough – with the simple experience of perceiving someone else’s pain as the most acute and real part of an experience. In one of my favorite arcs in The Sopranos when Tony’s therapist remarks that his attachment to a horse illustrates immense progress, though it is still not a kind of compassion he is capable of extending to his fellow human beings.

Similarly—and despite its almost ubiquitously negatively painted human interactions, You Can Make Anything Sad consistently voices affection for dogs. The shrink in me (or, well, the based on TV pseudo-shrink in me) wants to say this represents something more beneath the surface: that when the poet “recommends dogs” he is recognizing the value of other living beings, humans among them and saying he cares about how they feel. That other people matter. That, however much we want to be by or with ourselves, we also are, as Madsen eloquently puts it: “Grasping for something in another person, the way seats on the train become available right before your stop.” And though moments like these characterize romance through its almost inevitable failure, they also say that we want and need it. Self-obsession cannot sustain us. Talking to ourselves, touching ourselves is not enough, though we may wish it were.

Ultimately, You Can Make Anything Sad has a sort of bildungsroman quality, recounting an emotional coming of age in honest, quietly elegant language. It is sincere and patient and weirdly life-like. Everything changes very slowly: so slowly that you could also say nothing’s changed at all. It is tempting to read the title as a kind of model attitude: either seizing authority through our endless capacity for pessimism, or the opposite—suggesting that since we can make anything sad, we can also make anything happy. I think that’s too easy. Either way. I would rather focus on the verb to make and the possibilities it presents: we are both freed and made responsible by acknowledging that our experience is largely self-created. Most of all, this means that people are capable of change, however staggeringly bleak they perceive their circumstances to be. Closing in March, the collection’s last line is a calm reminder that we still have a chance to make things different: it will “be a new year soon.” And no matter who, where, or when we are, it will be.

You Can Make Anything Sad by Spencer Madsen is now available from Publishing Genius.