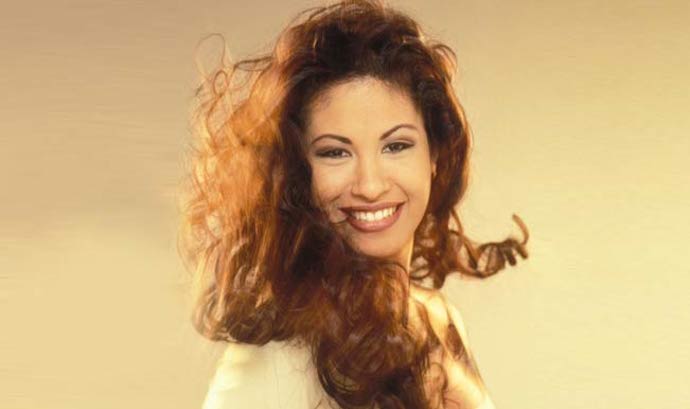 It will take 19 hours and 59 minutes to get from Chicago, IL to Corpus Christi, Texas. I would go but I have never learned how to drive on the highway and today does not seem like the day for that.

I will meet her in a bathroom.

I want to light my hair on fire while I play Amor Prohibido on my computer. Elysse, I never told you that I believe I am Selena Quintanilla. I have a lot to accomplish in my 23 years and I have wasted almost four on you. I have a lot of work to do.

Elysse Mora keeps a sticker picture of me on the inside of her sidekick. I took it by myself in a photo booth; I was too young to pick a background. My fingers would not reach. I am a floating head in a blanket of bright white.

I am all bangs.

Selena’s parents were Jehovah’s Witnesses and the only difference between us is that at 20 she already sang Baila Esta Cumbia.

I don’t even have one song.

Elysse Mora keeps her things at my house. We do not always have to be quiet.

We were both sitting in the car with my parents. I wanted to make up a language with her. I just wanted to tell her a few things. They’re very simple. It could be very easy to make up a language, I think it really would. I was looking at her like: let’s do this through osmosis. I was looking at her like: I wish I could have described it. When I tried, I just thought of how I could film it.

Everything is simple in a movie. Everything looks better as a jump cut.

Can a camera capture sweaty palms?

Selena Quintanilla learned spanish phonetically so she could sing. I think she wanted to connect. You know, I learned Spanish at home while watching tv. I think I wanted to hear something that made me feel separate.

Elysse Mora keeps my phone number on speed dial. I was not always #3. I am for a while though.

I wanted to send her a messenger bird, and each note attached would be in a different language. I am so old world for her. When she put each note into google translate I wanted to be looking over her shoulder. I wanted to see her reaction when the words came up clear. And perfectly conjugated.

When I was in third grade Ariana Maggio told me my name was written on the bathroom wall. Have you ever felt blood swim? I could feel the waves. I know we all have a personal moon. We are all shifting tides.

She told me it said, “Kaitlin Burke is a Lesbian,” and the last word played hide and seek in her mouth until it moved out like thick smoke.

I cried to Tamara in the grass behind our school. That is where I would bury every dead worm I found; hold tiny vigils in their honor. My mother thinks I am sensitive. My teachers say I am a challenge.

Tamara said, Her Jerusalem accent spread heavy on her tongue: I do not understand, What is a lesbian. I spoke in a voice I had learned. The one my mother used when she grasped my ear at church, when she was telling me to pray: girls who kiss girls

I made the principal wash it off the wall but when we walked into the bathroom together we found that it was never there.

Elysse Mora keeps her hands on my thighs as she teaches me how to kiss. “Grab his face like this,” she cradles my head, and I am stirring. No one has ever looked at me like I was fragile. Boys tore into me like they tore into my sister and I am not wrong when I say it makes me feel like a gift. I do not get presents often. And in movies they rip off all of the wrapping. I know men have expectations.

Elysse Mora keeps her nails cut short. She says, It is easier to climb. She is an interesting illustration. She is my age, but in height she’s like a child. She could crawl through a whales heart.

I wanted to be the whale.

Selena married Chris Perez at a secret ceremony in 1992. We were both born two years later.

Elysse Mora keeps calling me at 3 am. We talk about what it could be like to share an air supply. I say did you know we inflate 17,280 times a day. That is just a rough estimate but I am trying to help her understand that when I press my fingers to her ribs, I am having a conversation. I am trying to say, I know it is late but I just called to tell you that when I tried to fit our names together it wrote you a letter, it said: you can do what you want.

Instead I say: what is that noise.

It is her mother looking for a knife.

Her breath is scattered, moving out of her mouth and making its way around her room before it comes back to her lungs.

She is telling me I have to meet her in the park.

Selena died the day she was supposed to begin recording her album in english. She had officially crossed over.

Elysse Mora keeps her head in my lap.

I am pushing my hands through her hair. I am finding the mole on her scalp. I am calling 911. I have never dialed 911 and I am surprised when they answer. I like to rehearse phone calls. I like to know which way my lip will curl.

[over the shoulder shot framing Elysse]
RED THINGS DRIP ONTO THE GRASS.

RED AND BLUE LIGHTS SWIRL THROUGH THE AIR.

THE GIRLS APPEAR TO BE GLOWING.

THE GIRLS ARE LOSING CONTROL.

We have strings hanging off of our fingertips and we will keep asking when we will be assigned characters. We just need to know our roles. We need to understand our story structure.

Elysse Mora has her eyes on the grass when I say: I love you.

“Ma’am. What is your emergency?”

March 31st 1995, Yolanda Saldivar waits in a hotel room for Selena to arrive. She tells the police later that she had been planning this murder for a while. Selena’s father says his daughter was always too trusting.

Elysse Mora keeps her hair cut close to the nape of her neck. The last time she sleeps with me in my twin bed we are both trying to find ways to merge into each other. We have not been this close in months and I know she is telling everyone lies about me but I do not care. I just want to find the colic in her hair and turn my finger into it. She tells me she has a boyfriend now and I already knew.

Here are the facts: We are just best friends. We have only kissed twice. Everything is ok.

After doctors tried to revive Selena for 50 minutes, she was pronounced dead at 1:05 pm from loss of blood and cardiac arrest.

Her father told her to become a success she had to find her people; her corazon.

Four years later in a thai restaurant I tell Isabelle the story of the first time I had sex. How he unbuttoned everything. Moved in and then through me.

I say: it was not terrible.

I say: he asked me if I liked what he was doing.

I say that I did.

and I mean it.

But I am thinking about how it felt when we opened candy in church. And she would pass it into my hand.

And we were quiet.

And we brushed fingertips.

And I was a turntable. I felt myself skipping.

There is an entire website dedicated to listing facts about why Selena Quintanilla is in hell.

Elysse Mora keeps bringing It up. She is at my grandfather’s funeral and I am watching her cry more than me. She looks nothing like how I had imagined we would look as adults. When you are young, you imagine, and when you are an adult, you reimagine. I will just have to reimagine her. She keeps telling me she is sorry. I am not sure which thing she is apologizing for but I can’t find enough air to ask. The room keeps making me the sun. Everything is just revolving. She asks me about a boy I have not slept with in months. I say that he is doing very well. I treat her like a three hour brunch friend.

I hug her like I am trying to consume her.

I notice a little fish tattooed on her forearm.

The 1997 biopic about Selena Quintanilla-Perez starts and ends on a shot of a waxing moon. There is no indication of the weather.

When the blizzard came in 2012 we shoveled for days in my alley. We said that if it kept coming down like this we could just become two forts. We could just be gutted snow piles. People will warn us that snow melts. We decide that we are not worried.

They don’t know shit about the water cycle.

and when you find me I will be singing:

how this hurts me.