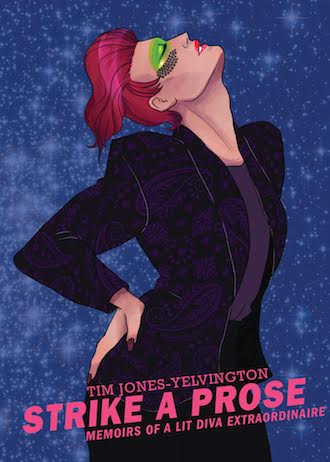 “What is the meaning of an artist’s life?” asks a fictional interviewer in the beginning of Strike a Prose: Memoirs of a Lit Diva Extraordinaire. The interviewer directs this question to TJY: a polyvocal pop idol “literary diva” who embodies the real writer—Tim Jones-Yelvington—the decidedly unreal narrator/author of this Memoir, and a pastiche of hyperreal performative brands. TJY responds to the interviewer in the vaporous, coyly mystical voice that characterizes so much of this strange hybrid novel: “I believe in a future that is neither in the future, nor now. I say, sequin the whole network of symbolic relations, and the future that serves as its prop! We may never touch sequins, but we can feel it as the warm illumination of a horizon imbued with potentiality.”

No critical vocabulary can satisfactorily evoke the multitudinous sequined essence of Tim Jones-Yelvington’s Memoirs. A kaleidoscope of cultural tropes and myths of queer identity—ranging from abuse narratives to Instagram influencers, from bildungsroman to perfume ads—Strike a Prose gleefully scatters both the glitter and litter of LGBTQ psychic residue. The moment these Memoirs reveal a detail that feels like truth or confession, that detail bleeds into the ever-shifting blur of their sequined kaleidoscope. Yet there is a profound—and particularly queer—honesty in the evasiveness and fluidity of TJY’s Memoirs: an eternal becoming, “a horizon imbued with potentiality.” As TJY explains in a later interview, his text is “neither a lie nor a confession,” but “an inflexion.” In this sense, TJY’s Memoirs personify both the elusive legacy of queerness and the glitchy performative screens of our present moment.

Identity is a complex substance in Memoirs of a Lit Diva Extraordinaire: an inscrutable high octane cocktail of narrative elements. TJY’s detailing of his childhood traumas—his exploitative birth parents who groom him for literary stardom, his equally skeevy adoptive parents—reads melodramatically, like the all too real, all too prevalent, and all too expected queer stereotype it is. In a morbidly campy sequence redolent of What Ever Happened to Baby Jane?, TJY’s adoptive parents force him to wear his childish clothing and perform in the role of a little boy darling after he goes through puberty. This sequence speaks to a kind of eternal adolescence—a failure to fulfill ones expected sexual/social trajectory—that is a particular hallmark of queer experience: the sensation of being so visibly all wrong. TJY, however, learns to harness this wrongness as a form of power, preening before the crowd at a poetry reading as he recites his own words:

Elbow hosiery, top heavy and
Tipsy. Lit up, I traipsed.
[…] A dear yummy elf, I
Delegated my secretions.

As a liberated adult, TJY continues to perform his trauma for a rapt audience, using these very words to describe his entry into the fashion world. Tellingly, the audience calls out to TJY, “Let him rape us!” In this way, Memoirs illustrates the public’s fraught fascination with TJY’s transgressive empowerment. Memoirs of a Lit Diva Extraordinare also recognizes the capitalist drive behind this empowerment, presenting a bizarrely, exquisitely insipid marketing campaign for TJY’s signature scent. This scent is impossibly, ridiculously complex, at turns described as the smell of “ink on paper”;  “jasmine”;  “velvety hues and erotic spices”; “nectarine, cyclamen, and marzipan”; “fresh-tilled earth”; “ancient forests”; and “vanilla.” “You just want to eat it, don’t you?” TJY purrs. “And guess what: no calories!”

The book also examines how TJY’s younger generation of fans attempts to replicate this “lit diva’s” identity. The novel is bifurcated into sections narrated by the mythical TJY, and sections that follow the coming of age saga of Karl, a queer kid who’s just beginning to realize his sexuality. TJY’s fierce persona serves as a model for Karl’s adolescent evolution, emboldening him to stand up to bullies and turn his own sexual abuse—by his drama teacher, Mr. Ruland—into a performance:

By the end of the book, it feels as though Karl and TJY have been kaleidoscoped into a single sequined identity: magnanimous, fierce, and brightly “lit” (in every sense). But at what cost? To what end? And to what extent of ever-expanding performative replication?

Thus, Strike a Prose: Memoirs of a Lit Diva Extraordinaire calls upon queer readers, queer writers, and writers at large to examine their process: the mythologies with which we construct and obscure ourselves, “neither lies nor confessions.”