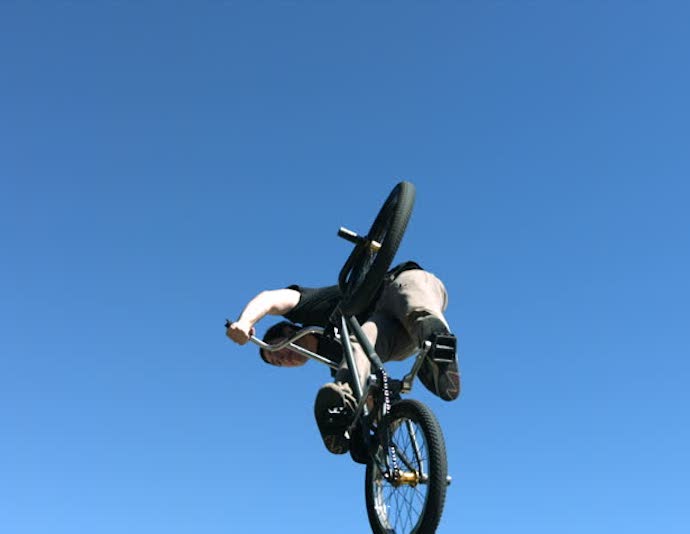 The original uncut tape begins and ends with kids on BMX bikes. The footage in question appears only briefly, like some accidental lapse in otherwise nonstop BMX action. The timestamp in the corner says 1986 and almost all of the tape is of boys on bikes under mostly blue skies moving in fluid, uncompressed analog NTSC video. They’re going at a jump they’ve built in the middle of a vacant lot full of pale dirt and small, erstwhile stones. You don’t wonder where they are or which one you’re supposed to watch. Each shot is canted slightly this way or that because the hulking VHS camera has been propped upon something nearly level, or leaned against the leg of a folding chair.

Around minute sixteen this all changes. A line of static falls and the video shifts to a closer, handheld shot of single kid, no bike to be seen. He’s standing at the top of a steep and roughly kid-high concrete embankment that sinks from ground level into the dug-out ramp of a supermarket loading dock. Odd-faced and skinny, the boy has on a baggy bright red tee shirt and long, cutoff jeans. How minimal he looks under his clothes, frail, staring down from the top of the incline. He’s awkward at age ten, with a nose too big for his face and face too big for his body. And between him and the drop he holds what seems to be a novelty skateboard by its own comical, sharply rounded-off nose. The board is circa the tape’s timestamp: early, directional, with old plastic rails guarding a graphic of a skull that’s being trespassed by a snake. The tail of the board widens as it goes, like a whale’s flapper. Concentrating now, the boy bends to align the tail with the incline’s edge, then he stands and we see his awkward face crunch into a smile. His eyes are wide and appear to have been stolen from a large bird. But he’s not frightened, standing now with the tail under one shoe, balancing it nearly perpendicular over the nearly vertical slope. Soon the camera shakes a little and then the boy goes for it, stepping the other shoe onto the board, leaning forward and rolling, if you can call it that, down the wall.

At which point, failure. Awesome and singular failure. The boy discovers concrete face-first before his hands can help. He stands quickly back up and he’s alright, he’s alive, this is the activity for which boys have been manufactured. But there is blood suddenly, and everywhere. One hand goes to his mouth and he looks at the camera and yells…something. Then the boy waves. Not to the person holding the camera, exactly, but rather the people he seems to know are waiting, or will one day be waiting, on the camera’s far side. Meaning us.

He waves, hustles to retrieve the board, lifts his shirt to wipe more blood from his face. Then he screams sharply to the sky. He moves to climb the wall again, an immediate glutton for something we don’t quite know. Then the clip ends and we’re somewhere dark, briefly, a home or hallway, and then it’s back outside to the field where another parade of regular boys riding regular bikes.

So we rewind and set the player to slow motion and watch the clip again. The strange ugly boy is on the top of the steep incline and the huge board is under his left foot. It’s 29.97 frames-per-second we advance at quarter speed as he breathes deep, heaving breaths. What before was negligible shake of the camera’s is tremulous at this rate, a tectonic denial. No, the cameraman tells the boy, do not. Then the boy’s right foot steps onto the board and he leans forward, committing fully. There is no doubt anywhere in his body. If anything, his body affects a kind of death embrace. The angles seem so wrong, now, here in the stuttered transition from incline to ground. Frame by frame he is pitched forward. The moment of impact is terrible and nauseating but then he’s rising before it is even over, he’s up as the blood blooms from mouth and nose at once. The hand inches to his mouth, and this time you can see what’s happening.

He’s not waving. See how he looks to the camera with eyes showing mania and revelation, and notice this time how these few gravid seconds of bloody failure appear to have revealed to this boy some kind of truth, the origin of a sound that, before this, he sensed but only from a great distance, like a siren ringing two or three states over. Pause it just right and you can nearly isolate the very moment of this understanding, but it happens just after one frame ends. By the next the boy is already besotted with joy. Staring into, or through, the camera, his large nose spews blood. Then comes the yell, and it makes sense now: the wave is not a wave. He is throwing what’s in his hand. A tooth. He’s lost the tooth forever and throws it at the camera before picking up the board and lifting his shirt to his face, roaring into the sky a brief prayer, or protest, or perhaps oath.

To describe the moment in words is to do it an injustice exactly as grave as the footage does to the act itself. From here, we’re watching through a window through another window, and we understand light waves, we understand refraction.The better we do to evoke this boy, starry of eye and ripe with wonder, with mischief stretched into skin and knives affixed for fingers, the less we want to hear.