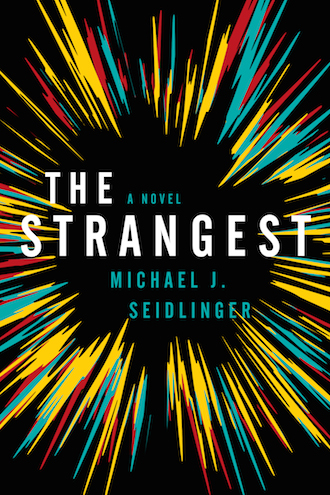 In premise, The Strangest is a contemporary adaptation of Albert Camus’s L’Étranger, originally published in 1942 in French. Camus’s work established his reputation as an absurdist and existentialist thinker. Seidlinger’s illuminating novel reconsiders the character of Meursault as Zachary Weinham.

Zachary is an upper middle class white man who might be diagnosed with social anxiety and obsessive-compulsive disorder. He works as a salesperson for a company that resembles The Sharper Image. He spends his time online—tethered to his cell phone or navel-gazing into his laptop, writing posts and commenting as “Meurks,” his online persona, an obvious allusion to Meursault. His involvement with technology is to the point that he eschews human interaction, as Seidlinger writes:

Charging phone is tantamount to forced socialization: Loathe it when it happens but can’t help but end up letting it happen.

Readers familiar with the general story arc by Camus won’t be lost reading Seidlinger’s version. We follow Zachary through his very detached, mundane experiences of day-to-day life. The novel starts off with Zachary’s oblivious experience at his friend’s funeral. We get the sense that he feels put-upon and awkward, delivering a terrible eulogy, which serves as evidence of how aloof he has become.

The story really picks up when Zachary meets a catalyst: Christopher Rios. Rios equates disruption for Zach. They meet at the Hard Times Café, and Rios entices Zach to become implicated in his strange criminal plot, discolored by sex and drink.

Zach’s own lack of perception (or lack of concern) leads him into a situation from which he can’t recover. He, like Meursault, crosses lines that can’t be uncrossed, leading to the consequences resulting in his imprisonment.

As an artifact of prose, this is not the easiest novel to digest. Seidlinger writes a rather unpalatable character, but in working with The Stranger as base material, that’s kind of the point. That said, plowing through some of the more obtuse sections of Zachary’s indulgent, detached musings about his online life give way toward the only redemption the character and the reader can hope for within the context of the narrative.

Not to forgo the issue of labeling, Seidlinger seems particularly interested in how labeling works as a social function–or as Kenneth Burke puts it, how people are “symbol-using animals,” which implies that the nature of reality relies on conceptualization in communication. If language is socially constructed to allow groups to make meaning within context, what happens to subjects outside these groups? Zachary is an example of how social meaning is deconstructed through the distancing mechanism built into technology. Consider social observations in which people are shown to act passively in the face of violence or abuse, continuing to participate as spectators rather than intervening on behalf of the victim. These notions drive home what is so absurd and alienating about our moment.

Meurks functions in a way to illustrate this dichotomy between temporal reality and Zachary’s online reality. Zachary’s identity becomes so co-identified with Meurks that there’s a reversal in his consciousness, where Meurks becomes the dominant persona. The digital world supersedes the physical, and his interpretive framework through which he relates to others creates a character so morbidly detached that meaning is lost.

This loss of meaning speaks to the ideological power of social media. Zachary is subject to this perversion of reality to the degree that he experiences total alienation—both from himself and from others. Meurks represents the loss of values that permits people to behave differently online than on the physical plane. Once the line is crossed and the value systems are thus inverted, Zachary acts like Meurks in the real world, which enables him to be devoid of consequences to the point that he commits murder.

Zachary comes to accept the futility of his own attempts to cope with reality as he contemplates how society has labeled him as unwanted. Returning to the issue of socially constructed meaning and identities, Seidlinger writes:

Society sees you not as the person you are but as the impression you’ve made. The straight line stitched across our foreheads are instantly seen and assumed; no chance to explain why that line might be here, or what sort of infliction might have occurred.

In Zachary’s talks with the Prisoner, the dialogue assumes the point of view of two philosophers conversing in ontological terms to construct a sense of meaning within the context of confinement—finding some value in their existential experience of life as it is.

The Strangest is a challenging narrative work that brings home and contextualizes this familiar story in a way that is so painfully relevant in our culture today, a culture so often desensitized and detached from “the real.” Seidlinger is clearly aware of the exigency for this kind of work. It’s a wakeup call dressed as fiction. The degree to which Meurks churns out line after cringe-worthy line of self-aggrandizing postulations should suggest we ask ourselves tough questions: why read a book with a story we already know? As much as Camus contributed to creating the absurdist critique of the 20th century, Seidlinger gives us an opportunity to take a deeper look into the absurdities of life. The Strangest asks us to put down the iPhone and have an actual conversation.