Music: The Flaming Lips: The Dark Side of The Moon (redo) 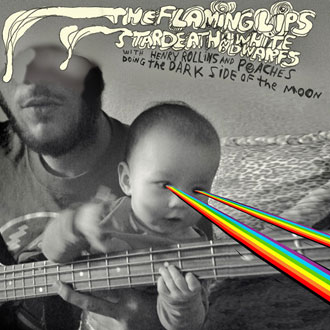 Flaming Lips: I love Dark Side of The Moon, listened to it times hundreds trying to synch it up with The Wizard of Oz (yeah). Once, when I was young and in rehab, a stint when insurance paid well and Tom Sizemore was there… I may be hallucinating the insurance but not the (future) star of Black Hawk Down…. Tom was just finishing up Heat. Deniro or Pacino… think it was Deniro dropped him off after that gig, in his Lear, had his friend packed with nothing but a few pair of scivvies, which he wore by the pool often, in lieu of actual bathing attire. Tom was not far from his bullying Scagnetti role, and me at 145 lbs or so, was his resident boy toy by default. I have a meditation book with his jokey signings to prove it. Would’ve liked to be friends with the dude after, but his agent cock blocked a call when I got back in trouble. Now that he’s a mess still, wish I could offer a hand…. ah but the handlers… always in the way. Well you’re now a pioneer, in reality TV Tom. Hope you and the madame don’t kill one another, cause you are an amazing guy, for rizzle… lol, just trying to talk the new talk you know (10, 15 years late, Crack Head). In rehab I took meditation tapes to the gym and put paper in the tape holes to record over the psychobabble “stream relaxation” shit. Then Dark Side played one day and it became my recovery anthem, especially their song leading into “Money.” if you catch my drift…anyway, someone recently asked why do this again? Just listen, and you’ll see. 10 times better than Jack White trying to learn secrets from Jimmy Page and The Edge in It Might Get Loud. But kudos upon kudos Lips, Peaches, White Dwarfs, even Henry Rollins (even though I’m more a Dez Cadena fan). Excellent shit all. -CM