Music I Have Traveled To 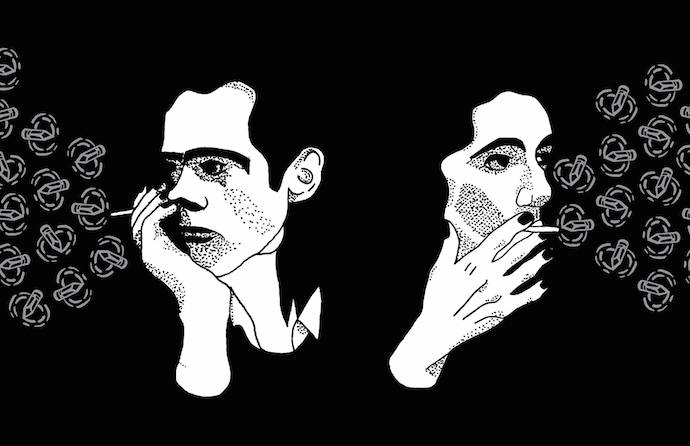 My mom and dad haven’t lived together since we all immigrated from Moscow. Divorce means I travel frequently, shuttled between remarried families on major holidays and during school vacations. The liminal space of the airport makes me feel powerful, like the captain of a ship renouncing all citizenships at sea. It also makes me feel terrible, so I listen to music: on a Walkman, a portable CD player, and eventually a lime green iPod mini. To this day, I feel a kinship with children of divorce. We’re all on edge, reluctant to trust, always going somewhere.

It’s 1997 and No Doubt is touring for Tragic Kingdom; there’s a show in California, where my father lives, the week I’ll be on spring break. I’m in sixth grade, weird before weird is good and so unpopular it worries my mom—as tickets are purchased, I am conscious of this being the only cool thing to ever happen to me. I am looking forward to telling everyone in my class about the concert more than I’m looking forward to the concert itself, even though it’ll be my very first. When school starts again, the boy whose name I write on pieces of paper and stick between the pages of books in hope that a god I still think might be looking out for me will do me this one solid—the boy talks to me for a day.

I buy Nocturama on the release day, fighting through the barcode stickers that hold new CDs captive and reading the lyrics booklet start to finish, because there are still CDs and there are still lyrics booklets, and moreover there’s still hope the latter holds some kind of key to the universe. Nick Cave announces a few United States tour dates and Seattle isn’t one of them—maybe New York, or something like that, and San Francisco. A poster of his brooding face hangs above my bed; he’s smoking, ambivalent. I decide to make the trip.

My host in California is a man I met in an online text-based game called Ancient Anguish. Or, technically, my host is his mom. They live in Fresno, a small house across from a cowfield. There are a lot of dachshunds, maybe five. At the show, I buy a black t-shirt covered in white song lyrics; later I’ll cut the neckline so it hangs off my shoulders. In the center of my chest, “you’re” is spelled incorrectly.

There’s a LiveJournal community where new members post photos and lists of favorite books and bands. You have to pass a vote to join; it’s that kind of thing, which means we all like the same music and worship Flannery O’Connor. I stay with one of the members in Los Angeles while Einstuerzende Neubauten is on a US tour—she’s far cooler than me, her bed surrounded by a precariously tall stacks of books. She gifts me a paperback Gospel of Mark with an introduction by Nick Cave. We look at LiveJournal together.

After standing in line for four hours at the venue, we meet the band when they come out to take a photo in front of the marquee. I shake Blixa’s hand and we speak briefly in French; I’m incredibly nervous and we all end up in the photo on the inside cover of the live recording sold that night. I pass out before “Die Befindlichkeit des Landes” starts—we’re at the very front, pressed right up against the stage, so I don’t fall. I come to as the song begins and rehydrate myself with the dregs of abandoned vodka sodas. Later I vomit in a Denny’s bathroom. I smell bad and am not allowed to sleep in my friend’s bed.

PJ Harvey’s Uh Huh Her still reminds me of summer, all wildflowers and German class and late hours at the sandwich shop I eventually quit because the manager keeps sending my coworkers home to smoke weed with him. The album’s supporting tour is either not playing Seattle or playing a 21+ show; I end up in Vancouver, BC.

My best friend from middle school accompanies me. She’s working for Starbucks that year and we eat croissants and maple scones the entire drive up, pretending that “C’mon Billy” is about Billy Corgan and buying a giant pack of Kahlua mudslides once we cross the border. We get dinner at a Thai restaurant and walk around the city. A woman sells me a billowing, sleeveless shirt, and I wear it instead of the second-hand lace dress I brought with me and still own. I’m deep into an eating disorder and remember more about the shirt and my stomach than the concert itself. The trip is short, just the one night. When we return to the hotel, the friend has a headache, and we don’t drink anything.

Six months later I’m studying German art and literature in Vienna, subsisting almost entirely on vodka and french fries. Abattoir Blues came out or is coming out and the resulting small solo tour includes an evening in a converted monastery in Ljubljana, Slovenia. Four of us from the German program take a train down and I get my first period in six months, perhaps the most inopportune onset since a Death Valley road-trip with my father. Slovenian pads and Slovenian ice cream are purchased; I sit cross-legged on the street and eat the ice cream with a plastic spoon.

Originally, two of us had planned to stay awake all night and avoid spending money on lodging. I’m no longer in an all-nighter mood and find us a hostel where I’m forced to rent the “romance suite” because the receptionist (reasonably, in retrospect) will not let me share a single bed with one of my companions in order to pay half the price. The room is fully decorated in red-and-white heart-printed everything. At the concert, I yell out a song request. Nick Cave laughs and says no.

I fall asleep and wake up ten years later, which is to say I spend a decade depressed. A LiveJournal goth marries another LiveJournal goth; they’re both attending graduate school in Oxford and I can never remember what it is they study or for which degree. The Manic Street Preachers announce multiple UK shows for the 20th anniversary of The Holy Bible, an album I first heard in Los Angeles during my Neubauten trip, somewhere between a Chinese buffet and the airport. But the Manics are actually famous in Europe, I remember—that means they’re playing stadiums. It’s when Neubauten announces a London date that I start setting airfare price alerts.

On the day before I leave for England, I faint at a warehouse metal show. This seems like maybe a bad omen, but I go anyway. There’s a dinner of steak-frites and multiple espressos. Blixa wears a robe of white feathers, waving his hands like he’s giving a lecture on something both profound and meaningless. My Oxford hosts show me the city: tiny sandwiches at high tea, xiao long bao, the pub frequented by Tolkien. We spend hours catching up and smelling Black Phoenix Alchemy Lab perfumes; we google “oudh.” I don’t bring a change of clothes and wash the crotch of my leggings in the sink.

When the Holy Bible tour announces U.S. dates, there are only a handful; two in California. I buy tickets to the Los Angeles show before figuring out how I’ll get there or where I’ll stay. In the end, we rent an apartment that comes with a little black cat—the AirBnB listing claims she won’t be a bother and mostly lies around “eating bonbons.” We eat oysters and drink mojitos. We get sunburns and blisters. Around the third song, I start crying and haven’t stopped. Before leaving for the airport we eat brunch with someone I met on Twitter while running a Nick Cave parody account in 2008. My eggs are under-poached.

The pre-sale for one of two PJ Harvey U.S. dates starts at the exact time I am set to meet with my company’s CEO; he is several minutes late and I manage to get Los Angeles tickets before sliding my laptop under my chair. The gastro-intestinal anxiety from this doesn’t leave ‘til after multiple meals. I keep looking down at my tights, through which you can see LICK MY LEGS; I’M ON FIRE tattooed between teeth and strawberries. Blixa Bargeld is on my calf, Richey Edwards on my shoulder. Tentative plans are made to meet up with the LiveJournal goths in Los Angeles; one now lives in Las Vegas and the other will be visiting during Oxford’s summer break. It’s possible I’ll faint. It’s possible I’ll cry. I’m still meeting strangers from the Internet.