Deep in some fall sickness, I opened Pandora’s box two weeks ago, spending a protracted period of couch time in the Hamptons with ABC’s wicked smash, Revenge. Pouring through episode after episode, I cleared half of the show’s first season in one snotty sitting. At first I was rapt, drawn into this world of back-handed compliments and socioeconomic sabotage, but a sneaking suspicion quickly let the wind out of my sails. As a friend put it a week later over numerous glasses of cheap red wine, “as long as there are still Windex ads, it’ll always be trash.”

I wasn’t sure I’d be down when I heard tell of Revenge. Its parent network, ABC, is a station long-known for maintaining a staunch family agenda. What space would they have for a series about conniving Hamptons mavens and the men who love-hate them? The premise, for the uninitiated, rests on the superpower couple Conrad and Victoria Grayson and their despicably wealthy brood. Once upon a time, the Graysons set up their neighbor David Clark to take the fall for some seriously dirty money deals. And so they rule… until Clark’s daughter Amanda returns, under the assumed name Emily Thorne (Get it? Thorn). She wants Revenge.

And oh, it’s addictive. It’s tasteless. It’s a Wasp version of Dynasty, where the shoulder pads and teased mullets are replaced with simple, smart couture. The catfights erupt instead in minute twitches of rage in the too-smooth face of our icy matriarch (Madeleine Stowe). The show succeeds in a salacious––if obvious––first run. Like Dynasty or, what is arguably the zenith of the form, the British zinger Footballers Wive$, a strong and devilish storyline had me hooked from that sickly day onward. But like most great examples of the genre (and here I’m talking EVENING soaps, not daytime), we’re really talking about an inspired stride that a show will hopefully hit in its lifetime. None of the greats, not Dynasty, nor Melrose Place are ever consistently good. Melrose was made by its two-season Dr. Kimberly Shaw crazy arc. Dynasty fizzled with the departure of Fallon (Pamela Sue Martin). Even Footballers Wive$ really only had Series Two, and an episode or two on either side of that fateful moment, to establish its full-trash reputation.

Watching the 22-episode start to Revenge over a one-week period, I observed a show that hit its stride remarkably early (where most shows take a season or two to get their bearings). Emily is hell-bent on revenge and every other character that crowds the show is either evil or stupid, making for some decidedly fun cat and mouse. Emily’s eyes narrow, just as Victoria’s face numbs, and it’s spy versus spy, in a world where the “justice” that provides the narrative crux of the show is temporarily forgotten for the sweet revenge served up with every episode. This is where the show is great and so vindicating in the “aftermath” of an economic recession––watching the rich dethroned, one beach house at a time. But too soon does that wickedness falter. And ABC bares its designs. For a show to be successfully wicked, like Melrose or Wive$, it must temporarily lose any moral (well, okay, you can cheat and heap all morality on one blah character––that works too). Picture a manic writing crew with free reign and fire in their eyes. What makes for great television, where these titles are concerned (and what Revenge aspires for), is frenzy. The frenzy translates to the viewer as a tizzy of excitement and breathlessness. An intrinsic corruption, a temporary moral bankruptcy, however fleeting, is necessary for proper trash TV. 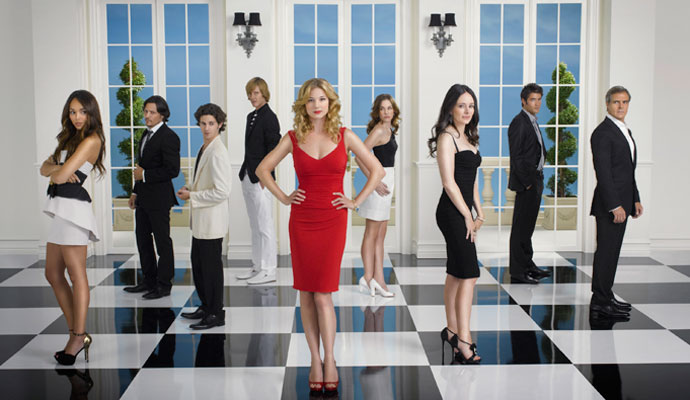 I recalled a similar sensation when forced to watch a full season of Dexter, a commercially popular show in its own right. Ultimately, Dexter left me cold because it (ironically) never forgot its conservative morals. Dexter is a fundamentally guilty show, tracing the pious plight of a serial killer who shoulders his own bloodlust by taking it out on other “bad guys.” So the killing is offset by an overarching morality. The writers of Dexter were too cautious, never rolling up their sleeves and going to town with what portended to be the show’s very subject––senseless acts of violence. And who wants caution in television, really? Dexter, to me, made for some ideologically foul programming because you were constantly assailed with blatant Manichean dilemmas and the reaffirmation of values in the midst of your leisure time with the boob tube.

Of course, melodrama is fundamentally Manichean, so the form’s true thrill comes in the detours, in the fits and stops of frantic vertiginousness that builds as its villains and perpetrators exact their delirious sway. The closure of various arcs or seasonal aftermath may bolster the woeful moral fable that is the arc’s very purpose, but oh, to be caught in the maelstrom of fury, during those moments of blind conviction. That aftermath is what Revenge serves, too early, in the season’s close (but even before then), leading me to disavow my lust. A false fruition of Amanda/Emily’s revenge plot exposed ABC’s grip––too ideological, too tidy––the ol’ bait and switch The morally corrupt were punished and the blonde protagonist (exalted for her carnal rampage) was vindicated; a pious Emily sat with her head held high. In her Hamptons beach house.

Using the moving-image format to make sense of this populist language is perhaps more apt a space for the avant-garde. And a week after my feverous marathon came Views from the Avant-Garde, a yearly facet of New York Film Festival that showcases the cream of the experimental crop. One of the most anticipated titles on view this year was Circle in the Sand, the recent long-form effort by Michael Robinson.

Robinson’s star has shot up in the past few years, with numerous high profile grants and the artist’s inclusion in this year’s Whitney Biennial contest (all before his 30th birthday). And not without cause. Robinson is truly one of the most promising voices of experimental film and video in eons, a visionary who can adeptly mold pop-cultural detritus into exhilarating works that are at once  camp, nostalgic, dystopian, and heartbreakingly reverent. Who else could weave footage of Liz from Cleopatra, Michael from “Remember the Time,” DVD extras of Swarovski-detailed suits for the ill-fated This Is It tour, kitsch kiddy Ice Capades, and Egyptian pageantry into the wondrous fever-dream that is his 2010 These Hammers Don’t Hurt Us. That film recounts a plaintive maternal plight, as a pop God/mother, guides her lost son into the fabulous twinkling lights of afterlife (Liz bids Michael adieu). Throughout Robinson’s taut and trim oeuvre, voices ring out from Cyndi Lauper and Thompson Twins songs, monologues from the Masters of the Universe movie and passages from Stevie Nicks lyrics collide with modernist landscapes or rural retreats, wading through the mire of referents for something truly post-modern. Not pastoral, per se, nor romantic, but a world that heaps these overloaded voices under some fierce and glittering decaled belt while skipping into the void like some wanderer in a low res jpeg by Caspar David Friedrich.

Circle in the Sand is Robinson’s longest film by yards, though to those trained in avant-garde spectatorship 45 minutes might not seem so epic. But Robinson’s previous titles have come in piqued bursts. The languid pace of Circle allows the filmmaker to ruminate on the images, to create something more “cinematic” and the elements collected here can be quite exquisite. “We wanted to destroy knowledge, but from within knowledge,” the film’s opening subtitle reads. “We wanted to destroy it in order to replace it with a void. The complete absence of man, the zero point… We forget everything so as to start over, shattered glass shining in a perfect heap.”

With Circle, Robinson expands from the Robinson Crusoe wilderness of his If There Be Thorns (2009), which followed a backpacker through a forest of red lipstick-marked trees and palm fronds, subtitles blending the divergent escapist narratives of V.C. Andrews, William S. Burroughs, Shirley Jackson, Stevie Nicks, and Robinson’s own writings. Robinson returns to filming original material (where many of his prior titles relied on found footage) in a coastal setting where a post-apocalyptic world is haunted by outmoded technologies, strewn about a landscape in the aftermath of civil war. Unshaven men in confederate caps form camps and the women (or “slaves,” the press notes inform) line the coast in clusters, bartering forgotten fashions and pop detritus––old issues of People Magazine, scratched CDs by the Counting Crows.

Though there are a handful of glorious and dazzling sequences, Circles never quite succeeds at creating a whole new world in which these sacred pop rituals add up, which is a pity. The film notes paint a “near future…” where a group of exiles are “rummaging, stuttering, and smashing through the leftovers of American culture, these ragged souls conjure an unstable magic, fueled by their own apathy and the poisonous histories imbedded in their unearthed junk. Suspicion, boredom, garbage, and glamor conspire in the languid pageantry of ruin.” Such is the land that Robinson works to create, and many of the compositional elements (such as the slaves’ exceedingly hip attire, which include a skirt made from a Transformers bed sheet, sequined tops and lots of shiny eye make up) ultimately require more causality, aesthetic equilibrium, and narrative drive to justify their stilted brand of peculiarity. The outmoded machines, the hipster garb, the broken language each character employs when giving voice to found literature (be it L. Ron Hubbard or People) are distracting here because they never quite amount to a whole. And the intuitive-interpretive model which Robinson offered viewers in his prior films works against him here, as the details of this land are too specific to justify its hazy means. An ambiguous approach works well to create a malaise of digital entropy, but, in the case of Circles, the title doesn’t possess enough direction in order to interpret the story elements that Robinson seems to have scripted into the tale, the elements that would generate an emotion like “suspicion” in the slaves’ wayward gazes or give effect to a splendidly executed transformation sequence between a blindfolded prisoner and one of the female slaves.

Still, there is enough here to recognize the remarkably distinct and promising future in store for Robinson. It might be even more exciting to see what a larger scope and production would afford it. Creating the narrative-based Circle was a daring move for a filmmaker typically addressing his vision through the use of found footage and pop mash-ups into a palpably plastic world. The pieces of the puzzle are all on the table, this is clear. All this talented auteur needs to do is secure that final piece. 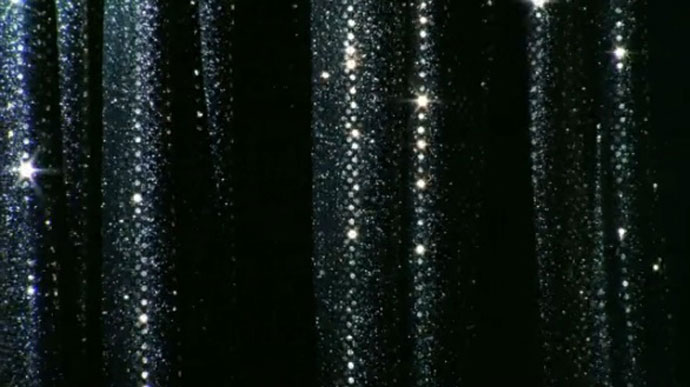