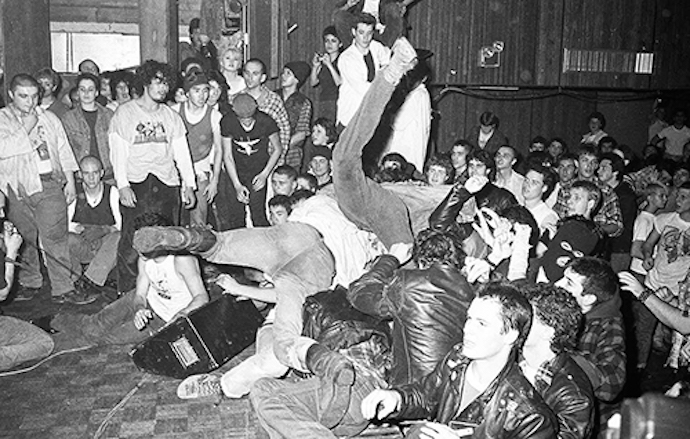 Why did I go to hardcore shows? Why did I hurl myself against other teenagers while the vocalist screamed over a battery of kick drums and distorted guitars? I wasn’t any kind of punk, not even a poser, which, for the local gatekeepers, made me more tolerable than the actual posers. I went to shows wearing dress shirts from Goodwill, buttoning every last button, even the collar. That’s me in the mosh pit, the one who looks like a Jehovah’s Witness.

Later, when I made it to college, I’d account for my showgoing by telling friends there was nothing better to do in rural Indiana. A meager joke, and not even accurate. If I were truly bored, I could have done crystal meth and called it a day. No, I didn’t want to please my body, or numb it; I wanted to punish it, and to punish myself for having one.

Hardcore has a history—D.C. in the early 80s, Minor Threat, Epitaph Records—but from the vantage point of a small Midwestern town in the late 90s, all that felt so distant as to be extra-dimensional. I didn’t even know who Ian MacKaye was until I read a book about the history of the genre. Local scenes at that time, just minutes before the rise of the internet, were like Arctic research stations, relying on periodic supply drops from a central institution back on the mainland. The scene in my hometown received shipments from a record label called Tooth & Nail.

Tooth & Nail is a Christian label that specializes in the loudest, fastest sounds from the underground—speed metal, hardcore, screamo. Unlike much Christian music of the time, which attempted to provide spiritual equivalents of secular artists as if religion were a food allergy (“Like Alanis Morrisette but not the swears? Try Jennifer Knapp!”), Tooth & Nail releases were pretty good. The label discerned that punk and its many offshoots were inherently didactic, educating listeners on societal ills both general and specific, and that the content of the music could include religious themes while still remaining true to its form. This was particularly true of hardcore, whose screaming vocalists were uniformly unintelligible. The most popular act in my local scene had one song whose lyrics were simply the text of Psalm 90, shouted over metal riffs and double kick drums. The mosh pit always went wild.

Even more important than words was spirit. Hardcore is a genre of negation, denying itself the usual giddy pleasures of pop and rock. Many scenesters carried this over into their personal lives, abstaining from drugs, alcohol and sometimes even sex, as adherents of the Straight Edge movement did. These ascetic aspects made hardcore a natural fit for the devout.

Or maybe it was the other way around.

The History Channel had a show about Christianity in the Middle Ages. It featured reenactments, like America’s Most Wanted. My favorite segment was about the flagellants. These were guys who railed against the corruption of the church by walking from village to village, their clothes torn to rags, striking and whipping themselves. The reenactment was clearly modeled on Monty Python and the Holy Grail, but they reminded me of something else. It looked like they were moshing.

Greil Marcus, in his masterwork Lipstick Traces, identified these flagellants as the ancestors of punk. By mortifying their bodies, they sought to open a vein in the body politic and bleed out the impurities of decadence, much like the safety-pinned punks of the 1970s sought to destroy the bloated embarrassment rock and roll had become and return the music to its primitive roots.

But what were we rebelling against in my small town? Who was the sworn enemy of my hardcore brethren?

The body. That’s what we were fighting. We turned our bodies against themselves.

The God of the Old Testament, the God of Moses and Abraham, was a villain. He imprisoned the boundless souls of humanity in leaking, putrid bodies, wiping our memories of any and all traces of the cosmic glories we once knew. But there was one who came to save us, to free us from the prison of matter. He was called Jesus. Church-sanctioned conspiracies led believers to think Jesus was God’s Son, but in fact he was God’s enemy, come to overthrow His tyranny and return humanity to its infinite expansiveness.

Or so goes the teachings of Gnosticism, a heresy that arose in the early days of the church. Turning the basic plot of Christianity on its head while adding heavy dashes of Neoplatonism, Gnosticism was a potent force in the early centuries of the Christian era, drawing numerous followers before more mainstream churches codified themselves under the Council of Nicea and declared the sect heretical. It never truly went way, however, clinging to the church like a barnacle, attaching itself to other cosmologies down through the ages. You can see its appeal. It’s based on suspicion, even horror, of the body, regarding procreation as the greatest tragedy. And who might be suspicious, even horrified, of their changing, alien bodies?

Clearly I wasn’t having sex. At home I locked my bedroom door and masturbated furiously, like I was scrubbing toxins from my skin.

I dressed not like I was going to a show, but like I was going to church. Over-large dress shirts from Goodwill, their cuffs sheathing my hands like casts. Summers I swore off shorts. I resembled a teenage girl concealing self-inflicted cuts, though I never harmed myself. Pummeling my body was what shows were for; performing such abasements myself would have been ineffectual, even disrespectful, like trying to baptize yourself.

The point of being submerged was that someone held you under.

I got the idea for my moshing Mennonite look from reading Wendy Shalit’s A Return to Modesty. The book promoted that discredited virtue as, among other things, a young woman’s defense strategy against flanking male libidos. Her account of the sexual revolution was that, after its initial liberations, commercial forces had divided it exactly in half: all sex, no revolution. Having sex at every opportunity was expected of you, especially if you were young and in your prime. Thus, abstaining from the sexual economy was the clearest form of rebellion available.

At least that was how I paraphrased her argument to myself. As a teenage Gnostic, frightened of my bodily desires as well as the capitalistic society that sought to exploit them, I longed for some sort of intellectual bulwark to steady my tremulous flesh. If Shalit’s radical conservatism was my theory, then hardcore shows were my praxis, the method by which I attempted to shape my body into a vessel that obeyed my commands, rather than the opposite.

I was raised in a lower middle class Christian household that valued moderation. My parents readied themselves to face the worldly temptations warned of by Focus on the Family, the drugs and the sex and the moral relativism. But my enthusiasm for hardcore shows confused them. The bands I saw were often Christian, but they sounded nothing like the Newsboys or DC Talk. It was loud, aggressive, even brutal, and in that sense seemed to go against moderation, the virtue my parents took to be inherently Christian.

But I found nothing Christlike in moderation. I wanted an extreme devotion, the faith of the flagellants, the ecstasy and the blood. That was the only thing that could bring me calm.

My father came to have an idea about my motivations. He thought I was going to join a monastery. He was reading Thomas Merton at the time, and kept seeing parallels between the New York intellectual turned Trappist monk. He worried he was going to lose me to God.

I liked the sound of it. It wanted to lose myself. That’s what I was trying to do in the pit, kicking and flailing, getting kicked and flailed, cracking my body open to free the soul.

I didn’t become a monk, of course. I got married, I had kids. If I’m now scared of my body, it’s because I know it will die one day. What will happen to my soul then?

I find I can’t make my brain think about it. I still have belief, whether through stubbornness or inertia, but I don’t care to talk about it. I just want to be silent, the better to feel the body I’m in. The soreness in my ribs from getting elbowed. The hands on my back as I crowd-surfed from the stage. The ringing in my ears.