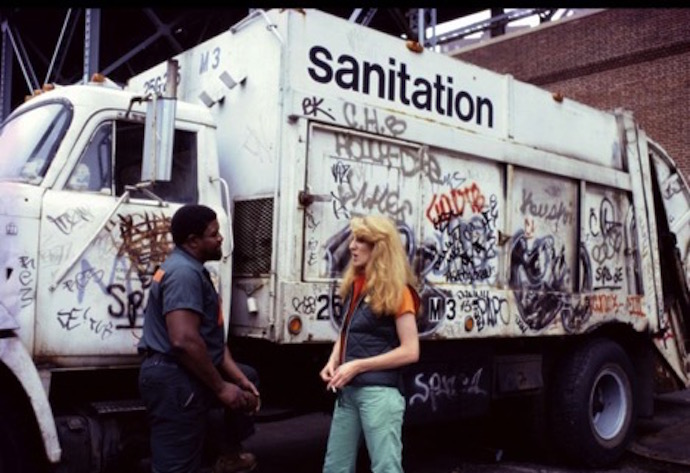 In the late 1960s the artist Mierle Ukeles found herself facing the challenge of how to be a new mother, cooking, cleaning, and doing the thousand routine things a mother must, and still find time to be an artist, a vocation that, on the professional level, makes great demands on one’s focus. This problem led her to write “Manifesto for Maintenance Art” in 1969, which led to a show as part of a women’s collective in which she documented and presented her household routines as a creative pursuit. This, and subsequent shows in the early 1970s, were well received, and this success led to Ukeles broadening the scope of her Maintenance Art in the late 70s to include the entire Sanitation Department of New York City. Ukeles has been working closely with the Sanitation Department of NYC ever since, for nearly 40 years now, a kind of unofficial artist in residence. (Even the poster advertising for the show could be seen on the side of all the garbage trucks in the city over the last few months.)

Ukeles most famous piece is “Touch Sanitation,” begun in 1978, in which she documented herself over the course of two years visiting all 8,500+ employees of the NYC Sanitation Department and thanking them each personally for “keeping the city alive.” I think about this now every week when I see the “trashmen” come around to collect our trash. And I think about the connotations of the label “trashmen” too, as other pieces by Ukeles in the show go a long way toward changing public perceptions and attitudes about sanitation and other maintenance workers.

At the opening of the show, for instance, I saw an older custodial worker dressed up in a suit. I knew he was a custodial worker because I saw him pointing out to some friends a picture of a much younger version of himself, from over 30 years ago, making art with Ukeles, in a project in which she directed 300 custodial workers to take a (paid) hour out of their workdays every day to make art. He told his friends that Ukeles had completely transformed the way he thought of himself, that he went from thinking of himself as one of society’s untouchables to a hero and an artist.

Another striking example of this kind of redefinition of self is the garbage truck parked in front of the museum, which is covered in mirrors. You look at this ubiquitous vehicle, the symbol of any city’s sanitation maintenance, and now you are looking back at yourself.

Along those self-reflective lines, there is a section of the exhibit in which you fill out a form outlining your own commitment to a maintenance project. You sign the contract and put it in a box and then you receive a hand-held mirror, with the mirror surface on both sides. When you hold it up to your face you are seeing yourself, but anyone looking at you is also seeing themselves too.

One of the more powerful pieces in the show is a collage of 300 circles, representing the workdays of a year, covering the very large wall at the center of the museum. Each circle is a clock face, with 8 hours showing and 4 blocked out, to represent a single workday. When you look at all of these hours together you are seeing the indelible representation of a year’s worth of a sanitation worker’s efforts. The representation isn’t critical of the burden of work, as one might at first suspect, but rather one of respect and gratitude; a third of a worker’s weekday, and nearly a third of his/her year, is given over to service.

The effect of this show is unlike any I’ve encountered as far as the way it affected my own life afterward. Not only did it significantly deepen my gratitude toward sanitation workers, but it also gave me a different feeling about my own maintenance. The day after seeing the show I had to get a root canal and file my taxes, two of my least favorite things, but found myself now almost enjoying the process, taking a kind of pride in it, looking for the creative angles. The show has the profound cumulative effect of inspiring you to take care of your business as an artistic practice. 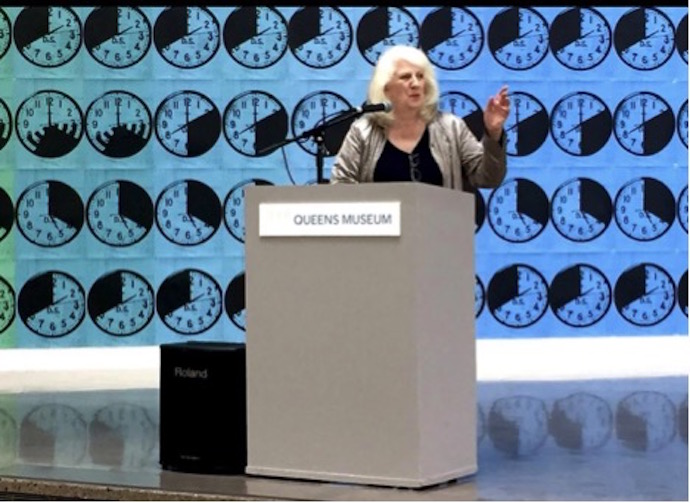