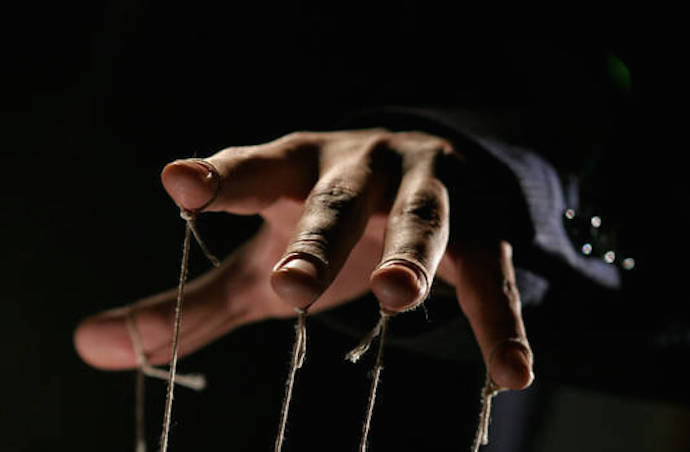 ‘ The actor is only a surrogate in place of the puppet. Puppets came along before actors. They are original. And therefore puppets are more than actors. The decline of the theater began when the puppet was pushed out and left to the traveling tradesman.’  — Jiri Karasek ze Lvoviv

Already even then the actor who occupied center stage had been replaced by a marionette that looked like him, so much so that many years later the actor began to assume marionette-like movements and even fashioned his clothes to resemble that of a doll’s.

He would lie naked on the tailor’s table at least once a week and would ask the tailor to stitch him up because he felt broken inside; he was scared that the fabric he was stuffed with would slowly start coming out.

Meanwhile, the wooden doll that had replaced him was now making tours of the European continent while Arvid, the actor, running out of money, had grown obsessed buying clothes and other sorts of accessories to wear on his person, for as much as he liked fashionable fabric, having grown up the son of an art collector, Arvid had tastes he simply could no longer afford.

Thrown out of his ancestral home, Arvid lived now in modest blue collar worker quarters in the same grand capital he was busy writing a cultural study about, the essential motif of which were ruins. He wrote about the living rooms of the rich and even dedicated an entire chapter to the unique and singular importance of the art collector, a figure he felt participated in the most tangible act of remembering, a figure who brought to the present day an age where things were not mechanically reproduced, like the doll who had presumably replaced him.

At no juncture in his work does Arvid make allusions directly to his own life. His research always involves alluding to the work of other cultural critics of his century, such as the Passagenwerk by Walter Benjamin along with works of fiction  by decadent writers such as Fyodor Sologub and  Gustav Meyrink.

Over time, Arvid has begun to take pleasure in his surrogate identity, walking down streets, always fully clothed and strapped in a pair of overalls, a thick belt, an army hat, big boots, clothes he feels he needs to keep his insides from spilling out onto the pavement.

When he had recovered from the trauma of his aborted acting career, he paid a visit to the small factory – a cottage industry of wooden dolls – that had manufactured the first reproduction of Arvid, the actor. He assumed that many had been produced in his image since then but to his surprise he learned that in an attempt to imitate life, the theater company had wished for the doll to age naturally, just like a human being.

Arvid spent a month in Prague learning how to carve wooden dolls and finally fashioned many to look like him, assuming different postures. He began to surround himself in his small apartment with these dolls and though he still likes to believe  that he is  made of cotton wool, satin, silk and perhaps even cheap polyester, he suffers from a chronic case of flatulence caused by an intolerance to lactose and a sluggish liver, the only true threat to his doll-like wooden identity.

After his visit to the doll factory, Arvid notices from across the street a female marionette presumably making her way back to the factory. He wonders what it is that takes her back on her own accord and  whether he would be able to make love to this doll and whether she would be able to withstand his wooden features.

He returns home and begins to write a chapter in his book. He takes long breaks, during which he paints on his skin. He dedicates an entire chapter to a character lost amongst an anonymous crowd. He enters shop after shop, buys nothing, speaks no word and looks at all objects with a wild and vacant stare. He finally returns to his own apartment building, stares at the entrance, and upon entering his apartment shuts the door behind him. He removes his clothes, and as he lives on the ground floor with a large window in his living room, he positions himself near the window, visible to all passers-by and suddenly comes to a complete standstill.

When he awakes, he rushes to the city to seek a new tailor to stitch up his left leg. The old tailor has lost his eyesight but Arvid’s left leg is falling apart. Arvid likes to run every day and though he has developed reasonable skill, his legs are still clumpy and his feet are flat. His arms bend much too mechanically on the hinges of his elbows. The eyes of the little babies who are pushed in their prams by their mothers suddenly light up when they see the marionette sprint across the park.

At the funeral service of an old relative, Arvid feels like he is the only one who is dying. Any moment, the marionette says to himself whilst sitting in the crowd, he imagines he would tear open.

He has begun to notice that all the little dolls he had carved in Prague last summer might very well be one day the only way to remember him by.

His father lost his entire art collection when he was only twelve years old and Arvid has been for many years now making a list – from mere memory – of  all the objects he owned. There were objects in the salon and also in a warehouse. In fact, he is trying to structure an entire chapter revolving around this list of objects and has even added some drawings and photographs. In one such drawing, he has depicted his father showing a friend an old wooden doll. The drawing asks to be set in motion, Arvid adds in the caption underneath the drawing. He remembers how his father, whilst showing such objects to friends, used to like touching them with his fingers, almost excessively. Arvid contends that this verbal inventory of lost objects might even serve as a sufficient surrogate for the objects themselves. It is clear that Arvid is fascinated with ruins, and as a result draws in his book attention to several other such parallel phenomena, such as plays that can not be performed and architecture whose sole beauty lies in the blueprint. Arvid believes that he can resurrect his father’s lost cabinet of curiosities by writing up a list, which although dry and colorless in comparison, might even parallel the original reality of those lost objects. In his final analysis, he concludes that the act of writing, itself, marks a veritable surrender, a resignation towards ruin, and in this way can be compared to antique art in so far as they are both remains.

Sitting now in a quiet, new suburb of this grand capital whilst writing his book, Arvid derives a strange pleasure of being removed from his childhood. The friends he grew up with still live in the city and even when they accidentally end up in, lets say, the same coffee house, his friends seldom recognize him. Very rarely does Arvid venture into town; he would rather have coffee and play chess with someone who has nothing to do with this city. He would rather take long, lonely walks in the suburbs, deriving a sense of comfort in knowing that the city of his childhood is right next door and that he is no longer a part of it.

In the same chapter, he has included a photograph of a sad looking child from a family of assimilated Jews. This child later grows up to be a writer and channels his father’s fancy dress shop into many of his stories, and even mentions in his diaries that the shop was his first school. Perhaps Arvid inserted a photograph of another Jewish child from a merchant family as yet another way to efface his own personality by replacing it with someone else he liked to believe was like him and in this connection posits that many of us have truly been replaced. Some of us in fact, Arvid finally concludes, died a long time ago.

Gaurav Monga is a prose poet from New Delhi, India. He learned German to read Kafka and is inspired by writers like Nikolai Gogol, Daniil Kharms, Walter Benjamin and Robert Walser. His debut book Tears for Rahul Dutta was published by Philistine Press. Much of his other work can be read at Birkensnake, Zero Ducats, Juked, Spurl Editions, Danse Macabre and Sein und Werden. This short story, Marionette, is a part of a forthcoming book entitled Ruins, published by Desirepath Publishers. Excerpts from this book can also be read in Hardly Doughnuts and is forthcoming in The Fabulist. Another collection of short stories, Family Matters, is slated to be published by Eibonvale Press in 2018. He teaches creative writing, literature, German, theater and epistemology and has worked at schools and universities in India, Nepal, Switzerland, and is currenly teaching in the Czech Republic. He is the founder of a fledgling publishing house called Pan`s Library and can be reached at panslibrary@gmail.com.