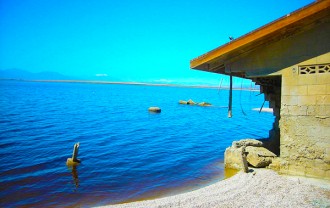 Before it all blended there wasn’t any room. The salt, the lake, the skyline, all seeded in their own veins, spread out along all available areas. Like a terrible stew packed it into a single pot, placed and displaced, but it cleared this floor that’s here now, for whatever is next. It is not clear what is next.

Traces last seen stirring under sleep conditions, not apparent in natural light, smithed out of available durable goods like plain English. Tinny elocution aside, awhile ago in blues this more substantial presence was washed about its feet and hands with a simple cloth, bathed in wispy light for this new day, and framed against the humid ground like a mighty, subsonic groan, gone now. In effect, it was there for all time, and went with time perfectly, that fabled ‘bridge to forever’ animated by an interior light. If it were something portable, or something that could be worn, like a scarf, or an anklet, one could hope, or believe, and thereby settle. It is in these capacities that many things are often settled.

My transience in what was present, caused by my attachment to what was not, was clearly hurting me. The failure to attach to what was, to feel it or hear it or touch it myself on purpose and with conviction, led directly to the bruising tumble through time. It was as unbearable as it was unavoidable through force of will. The cure would only come obliquely, through a dedication to principles to which were attached manageable and desirable actions that suggested an approach to time, even with all that was missing. It was what we called carrying on.

All the stunned critters donned ape suits. It was clarifying. A pond floated black matter. A suit of born yesterday was ever ready up in green. A high myth master broke and water poured out of its clear, blue eyes. Make system vent quickly. Hit its heart right in its red temperament.

A storm sock blew stupidly along a last avenue. It mixed with seeds, greens, and gowns. Pills race through you, redeemed in a series of blossoming messes summarizing your face. On one end, a worm will glide by with its soft intrusions. If it moves or speaks, you must decide.

Which hog do you want following you home? Which knife will you use? It has ten types of white in its hide when frozen. You gotta trick it, get the light all dim and feed it slow water. Bring more rope than you think you need. Be prepared for the stench. Prepare a border plan. Rest in stages, huddle a bit before it’s over. Tread the room’s wood plank floor with a ceremony that will lend some dignity to the whole affair. Then, back in track suits among the poorly-heeled, soaked three times their weight in amber, high up in broken folds of bare bodies, it will sing that tune it does, it always does.

Was born. Began being living. Hung around, like bread. Torn mortar measured shocked silences. All the must haves, all the noise. One quick person drinks its weight in sloppy hellos, its guts splayed out its doors and windows, blank recesses, all the talking “as if,” as if no lady had ever had a baby before, as if no hope ever got hitched to hems, as if never toiled, as if never failed. Make everything try to be about everything, or at least wear jangly things and make that clicky sound with your nails. We know you only forgot to smile, forgot how. For awhile, halo hats were all the rage. My rage remained unadorned. A pile for putting away. A pillow itself all fluffed, all puffed out with beige ruminations. You had to add in the blues and greens so it seemed shadowy. Maybe it messed up, but at least it stuck.

Megan McShea is the author of A Mountain City of Toad Splendor (Publishing Genius Press). She lives in Baltimore, MD.