LET’S HANG OUT: A REVIEW OF ALI POWER’S A POEM FOR RECORD KEEPERS 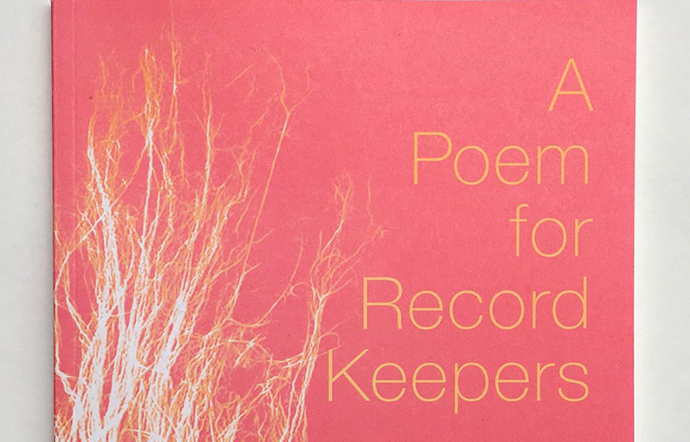 Those are the first two sentences of Alice Notley’s blurb on the back of Bill Luoma’s Works & Days, and the same strikes me as true of Ali Power’s debut, A Poem For Record Keepers. The spaces are interesting, and she—or should I say her speaker—would like Notley’s blunted sentences too. Here’s a pertinent quote from the 49th and final poem:

The spaces are ripe with interstitial suggestion, something like, “Feeling is translating” or “Speaking is feeling,” hangs out in between the lines. And there is speaking being done here; whereas other poets’ words might just as well remain in the head, Ali’s take their place in the air. They’re conversational (like, on a first-name-basis conversational), but more importantly, each line functions like a miniature autoportrait, brimming with personhood, personality. Consider these lines from poem 48:

Again the spaces create instability, possibility; the lines are self-possessed, witty, and filled with attitude. Obviously, the middle line can be ascribed to the preceding line or the one following it. This might seem like a simple device, but it’s all the more meaningful when one considers the lines that conclude the poem:

So I’m reading Ali’s book, and Bill’s Works & Days, and Bernadette Mayer’s and Hesiod’s, too, because A Poem for Record Keepers seems to be in that lineage. Who are, after all, Ali’s titular record keepers, if not them? And anyway, even if they weren’t on her mind when she was writing the book, her poems are comically deadpan like Luoma’s; gnomic like Hesiod; and comic and gnomic and deadpan all at once, like Mayer.

Then again, the writers whose words grace the pink back cover of the book might just as well be the object of Power’s dedication, too. Stacy Szymaszek, director of the Poetry Project and author of the recent Journal of Ugly Sites, or Anselm Berrigan, who, incidentally, is featured in Luoma’s Works & Days, and whose recent talking poem “And what does “need” mean? (for the Parish Hall at St. Mark’s Church)” functions as a kind record of the Poetry Project, where it was read. Here, writing about his mother, Alice Notley, he writes:

Already, I feel I’ve weaved a bit of a tangled web, but this is the kind of thinking Ali’s book inspires both in the lines and in the spaces. Nothing could illustrate this better than seeing her read the poems aloud (which I have been lucky enough to do twice, once at the Parish Hall and once before that at Wendy’s Subway). Flitting forward and back through the book, irrespective of order, her reading highlighted the ways in which new resonances arise where they might not have otherwise. Thus, the refrain, or hook, “Let’s hang out,” that ends each of the seven poems that comprise section IV of the book, both chime and change with each repetition:

Quiescence, desire, ennui, or threat: these implications and permutations result not only from the preceding line, but the preceding and intervening poem(s). The space before the final line builds tension, then, upon repetition, makes the invitation or demand seem tacit: interesting. The epigraph for this section, from which the refrain “Let’s hang out” is borrowed, is credited to Anonymous; but each section carries its own epigraph, from the likes of John Wieners and Michael Gizzi, as well as younger record keepers like Simone Kearney and Claire Donato—not to mention Bernadette Mayer, with section VII’s epigraph: You wanna get married?

In section 37 Power’s seems to suggest a method to the process of composing these poems that Mayer would approve of (though I think the portion in quotes may be borrowed from Jasper Johns):

Compare to Bernadette in her Works & Days: “Words chosen at random by cutting circles in a piece of paper placed over workshop’s poems.” Making, cutting, pasting, deleting. Power’s and Mayer’s poems, liberated of the unnecessary interstitial stuff, both have the same kind of aleatory gumption, and, funnily enough, were both published in the same year. Maybe even written around the same time. In any case, it seems like they were both hanging out together in same space in the collective unconscious. What else (besides stochasticity) could explain the similarity between Ali’s lines:

and Bernadette’s in Soule Sermon:

Though different in kind than in Notley’s blurb, Berrigan writes of space as well on the back of Ali’s book, describing “… the poem’s capacity to build the kind of necessarily enigmatic space love requires to fend off the grinding mob-vacuum that is contemporary American life these days.” And Ali seems to concur, if a bit pessimistically:

Despite this, it wouldn’t be fair to dismiss Ali’s insistence, the bonhomie of her refrain, which tells me she knows what she’s looking for, a space for record keepers: