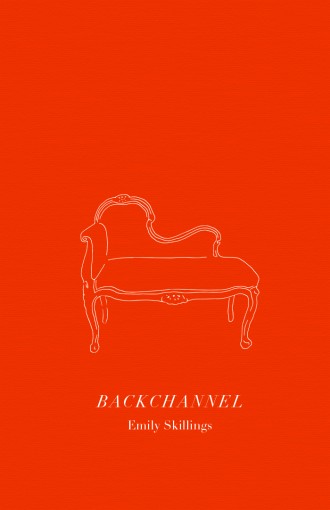 Word games are almost always a bit silly and a bit serious, and “Canary” – the poem that opens Emily Skillings’ Backchannel – is no exception. What first seems like a simple “bait and switch” becomes something far more interesting and poignant: forcing powerful, surreal images and familiar ones to coexist and interact on the page. Skillings reinvigorates the familiar, disrupting common images and expressions in stark and bizarre ways. By distorting images of a shooting, suffering, distance, intimacy, and the sky as part surreal, Skillings paradoxically allows her reader to see them clearly.

I hate birds and expect to hate reading about them, but surprisingly I do not. Like Lorrie Moore’s Birds of America, a Heather Christle poem I remember liking, one my friend Delia Pless wrote about geese, and of course Keats, Emily Skilling’s “Canary” is less a poem about birds than it is a poem about how people project human emotion onto other animate and inanimate beings. In this case, ‘bird’ [canary] offers a surrogate mysticism that reinvigorates language and utterance as it is repeated.

I find “Canary” to be particularly brave and difficult choice for an opening poem, refusing to provide a single, clear voice, theme or narrative. Instead of giving us “something to hold on to”, Skillings does the opposite: her language is maybe even misleading – it offers beauty, but it is mercurial at best and feels qualified by the unspoken caveat “but don’t get too comfortable.”

Instead of speaking in a single clear voice, “Canary” strings together images that use the same word in contradictory ways but otherwise may appear unrelated.  Individually, these might register as candid, even confessional narration, but grouped together, I read something kind of sly into them – as if these single moments of ‘perceived beauty’ could be red herrings – or road signs in some sneaky postmodern language maze where meaning recedes a little further each time you approach it.

The voice of “Canary” faces a sequence of disturbances: it feels overwhelmingly like an unbalanced poem, in which each line overcorrects some real or imagined error that preceded it. This registers with me two ways. The first is that this is a poem about language as fantasyland: more specifically, that language can guide us to imagine, perceive or experience impossible things, which is both wonderful and disappointing. That even art with mimetic aspirations cannot help but create a world that is solely its own. There is a Joshua Beckman poem that ends:

And so both projected, we are now

part of a garden, that is part of a

landscape, that is part of a world

that no one believes in.

Art can provide a landscape for something otherwise imaginary or private to take form. While we often write or create art objects with the hope that they will outlive us, it is also worth mentioning that we know that they almost inevitably won’t live forever, or even that much longer than we do.

The second [reading] is that the meanings of words change wildly when they are repeated: language always echoes or refracts itself in strange, unstable ways, accruing significance it did not possess originally. So it could be the case that any perceived resolution at the close of “Canary” is achieved at least partially by random linguistic musicality.

Maybe because of the bird, I find myself asking what Keats would do, or rather, I find myself struggling to tap into Keatsian advice, Keatsian Negative Capability: the ability to contemplate the world without the desire to try and reconcile contradictory aspects or fit it into closed and rational systems. I am trying to fight off the temptation to make sense where I should be making something else.

While, on first glance, “Backchannel” may dwell somewhat lengthily in the realm of the person pronoun, it departs from expected tactics of confessional poetry, engaging unexpected structures, movements, and subversions.

The objects of Emily Skillings’s attention are sprawling and often esoteric, but they are linked by a shared awareness of their status as subjects for poetry. Skillings’s narrator is a tricky one, often doing precisely what she claims to deny her reader.

“Every word in this poem is a dead body,” we are told at the opening of “Poem with Orpheus.” This both is and is not the case. On one hand, the poet goes on to create images that do seem very much alive. But, in a different sense, isn’t that what all poems try to do: momentarily breathe life into the dead, perform these fake little exorcisms – so, for a second, we can bring back what is otherwise lost to us? Skillings continues:

Each word dies as you read it

and floats behind in wooden canoe

that covers itself with itself

breath life into each image

to make a coffin.

This is a self-obsessed poem, only able to exist in a constant address to its own status, admitting what is borrowed or altered or made up. What seem to begin as diversions meant to warn or distract the reader from the poem become its actual subject matter. Is language dead? Is it alive? Do words hang in the air after we read them or extinguish themselves somehow?

By citing Jean Cocteau’s Orphée “where poems are essentialized as direct transmissions from the dead” Skillings’ poetics gestures toward eternity, like Orpheus’s head, floating down the river singing after his death. Perhaps all poems are born out of anxiety, as all mortals are born in anticipation of death. Poems return to their most basic, implicit territorial claim: announcing relevancy in a large and largely unknowable universe, making something to prepare for a void that lies ahead. Poems are territorial. They have to be. Good poems are also manipulative, making us feel, for a second, as if they (finally!) hold the answer to something we have long sought in vain. (In one New York Times Article, the astronomer says: “You get the feeling the universe is trying to prevent us from discovering the truth,” and reaches into a bowl of corn chips.)

Like Orpheus, we often return empty handed and eventually do not return at all. Despite or perhaps due to their comparably meager cognitive faculties, birds migrate in strange, precise ways that our science cannot fully parse out. And most of our questions circle back to report failure: failing to find answers, invoking either awe or disappointment (though usually both) when the hero is left more aware of the exhausting pursuit of knowledge yet still lacks the fruit itself.  Is the triumphant return really all that triumphant?

I’m thinking too, of the canary’s echoes, which strike me particularly now as permutations of various echo sequences that came before: Keats’ nightingale, Poe’s Raven, etc. Of course, they are different: Skillings’ canary bridges a gap between the familiar and surreal, while Keats address to the nightingale is meant as a negotiation of his own mortality, and Poe’s raven transmits the speaker’s mental state by describing an auditory hallucination at considerable length. However distinctly imagined, these fictive birds each act as an intermediary between the speaker’s mind and the outside world. Who or what do you talk to when you’re really just speaking to yourself?

Skillings and Keats end in similar places, which is to say they both end where they started (alone), only more aware of it. They are similarly governed; lamenting the same laws their metaphors reluctantly must obey. I’m thinking mostly of Newton’s––inertia, gravity, and so on. Keats returns to mortality when he hears his own cry “Forlorn” echoed out. “Time passes in two words. Can you do that in a poem?” Skillings asks us in “Statements and Curses.” Much like this, Backchannel manages to feel at once uniquely imagined and obviously constructed. The story of Orpheus wouldn’t be any good without the middle part, with all its murky circuitousness and sacrifice, its compulsive lack of success. It would be all waiting.

Backchannel by Emily Skillings is now available from Poor Claudia.