KORN IS THE BEST CROP

Over the last year or so, I’ve discovered several artists through Instagram that are incredibly necessary and exciting to me.

All of these artists are meme admins, meaning they create and curate content exclusively for an Instagram and/or Facebook feed. I was introduced to memes years ago like everyone else, via email chains and social media. They seemed like inside jokes people highly-focused on the internet shared with each other late at night through some obscure subreddit, and, if they were popular or funny enough, eventually made it into the wider world’s inbox.

Later, I saw them evolve through the work of literary artists like Steve Roggenbuck and other poets who used memes as vehicles for their poetry. Today, memes pages on Instagram are mainstream, with the most popular pages clocking millions of followers. Unfortunately, a lot of these accounts trade in racial stereotypes, sexism, or transphobia or otherwise steal memes from other Instagram accounts and repost without credit. Despite this, some meme admins are using the medium for political and creative fulfillment. They are challenging systems of oppression, or creating complex, thematic worlds out the most unassuming consumer products, all while making people laugh.

Take @pamplemousselacroixmemes (not related to the La Croix beverage company). Its anonymous admin has created a layered world that revolves around the grapefruit-flavored offering from the sparkling water company LaCroix. In this world, the hero, Pamplemousse Lacroix, fights the villains, Dasani or Aquafina Sparkling Water. Throw in Robocop, who features prominently in some of the memes as the main arbiter of justice in the sparkling water wars, and you’ve got a narrative that has since become essential, daily viewing for me.

Other accounts like @Gothshakira and @sensusalmemes use memes to critique teacup masculinity, @teenagestepdad shreds right-wing logic and @realalcoholicmemes reduces everything from the absurdity of democratic primary to the horrors of alcoholism to an irresistible chuckle.

I discovered @KornFan420 in early 2016. His memes covers topics like bed-wetting, vorarephilia, and Taco Bell. Along with that comes specifically working class memes about living with your uncle, having a factory job or getting caught stealing from a store. They are universally funny but also personal and specific to their creator. Instead of churning out meme after meme about hangovers or something, he’s making art out of his own life. His work can sometimes make me simultaneously uncomfortable and confused, but also strangely sympathetic and usually full of the type of relief you get with a good belly laugh. 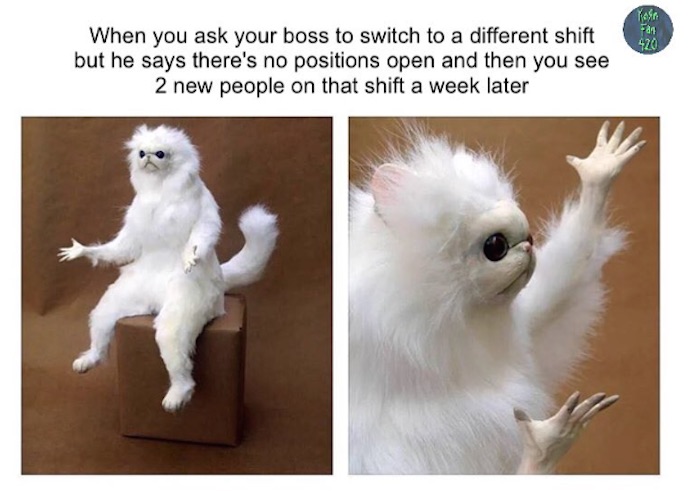 And despite building a large audience (he currently has around 15k followers on Instagram, and his Facebook page “KornFan420” about 40K likes), he goes out of his way to call out things about meme culture he dislikes–pages run by white dudes that post memes about black males being absent fathers, for example. I wanted to talk to him about how he got started, where he’s at now, and where he’s going in the future. 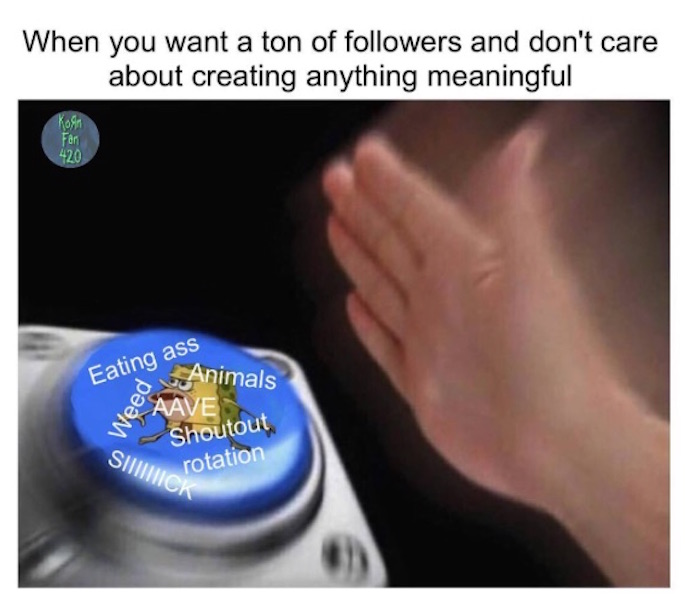 Where do you live currently? Were you born and raised there?

I live in a small town about 45 minutes away from Boise, Idaho. I was born in Portland, Oregon but I moved here when I was 8. I’ve moved around a couple times as an adult but for the last few years I’ve been here.

When and how did you start making memes?

I’ve always made funny pictures and digital art for as long as my family has had a computer but I didn’t start doing it heavily until September 2015. I had some friends that started making memes and I thought they were really cool, and I got into Jester Memes, some page called Suicidal Business Man Memes or something like that, I Play Korn To My DMT, and a couple others. I was also really into the memes that Clickhole would do. But in late August or early September, the guy that did Cabbage Cat said that he made a page and asked who wanted to be on it, and so I thought here’s my chance and got on and started posting memes on there, and then an ex-admin of I Play Korn did the same thing as Cabbage Cat, and I got on that and started posting more memes that I made and a lot of them took off so I decided to start my own page.

How do your family and friends react when they learn about your page?  Have you ever had to explain memes to a family member?

My mom and dad are pretty into it. I think. I know my mom is and she likes a lot of my posts and comments and stuff. My mom spends a lot of time on Facebook arguing with people on like Donald Trump posts and stuff like that, so she knows a lot of memes. I don’t think she’s seen a lot of relatable, “When you X” memes, but she knows about them. I don’t really talk about my page or anything with my family or friends IRL, but I talk about it with my girlfriend a lot. She usually gives me a lot of ideas and criticism. We completely have the same sense of humor. 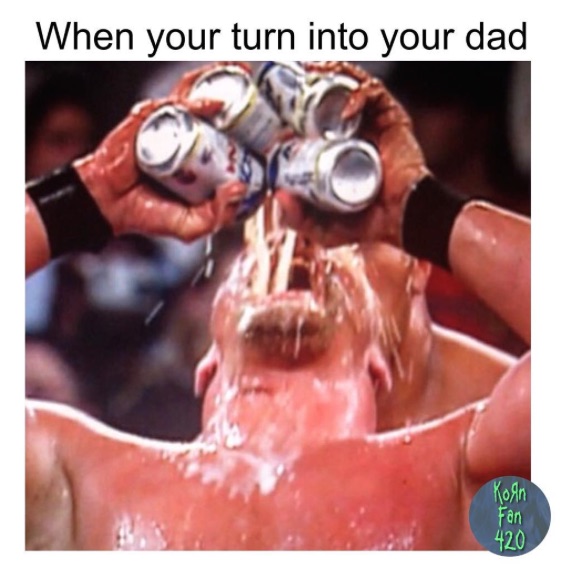 I think it’s really dumb to post something that’s some played out racist stereotype and say that it’s satire, which I’ve seen people do a lot. I think there’s a whole lot people who make “savage” meme accounts who are just rich white dudes or like young white kids. I don’t think that there’s anything wrong with “savage” memes and a lot of them can be funny, but when it goes from making lighthearted jokes about your life, the lives of people around you and just mocking black people and essentially doing a cyber-blackface, it’s fucked up. I think that @Versace_Tamagotchi made a great meme that tackles this. In the last week, I haven’t seen so many racist memes, but I’ve seen a lot of women-hating memes. I feel like there’s a lot of feminist meme pages popping up like @gothshakira, @scariest_bug_ever, and @sensualmemes who are shaking up the status quo and making people uncomfortable, which has translated into like pure disdain for women. 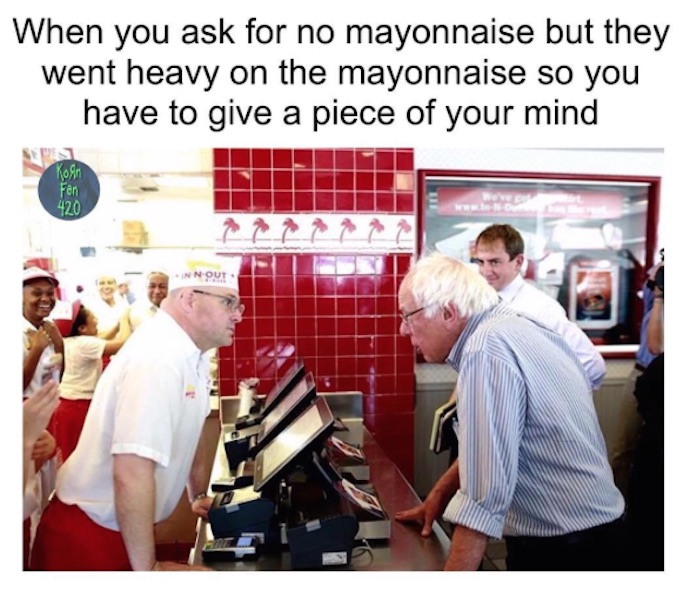 There’s been a lot of controversy around popular meme accounts removing watermarks and reposting other people’s memes without credit. Has this happened to you? How did you respond? Is anyone who puts art on the internet safe?

I’ve had this happen to me and it’s really upsetting. A lot of times you can make a meme in 15 seconds, and if someone crops out your watermark and adds it in it’s not a huge loss but it’s still upsetting. When I first started, I would get really angry, but now that I’m pretty established I don’t really care. Sometimes people will just straight up steal a joke you made and recreate it which has happened to me and a lot of my friends. I’ve seen people put art online and have it get posted without any credit for a long time. If I know the original artist I give them credit. I made a video meme of a painting someone did and tagged them and they got 200 followers from it, which is pretty cool. 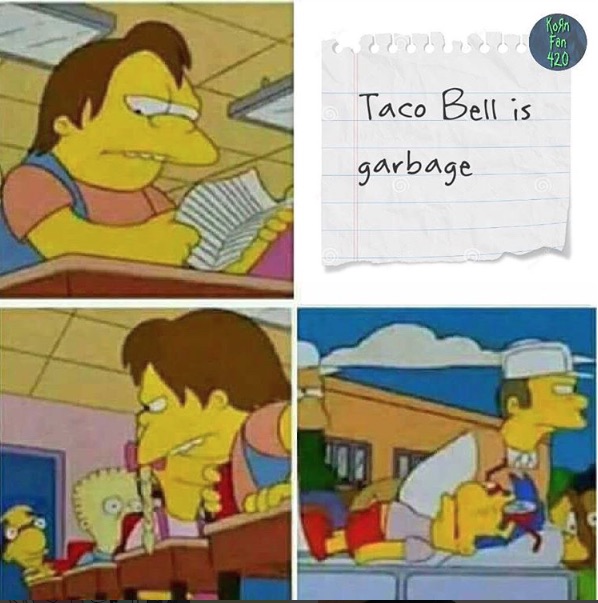 What are some of your favorite pages right now? 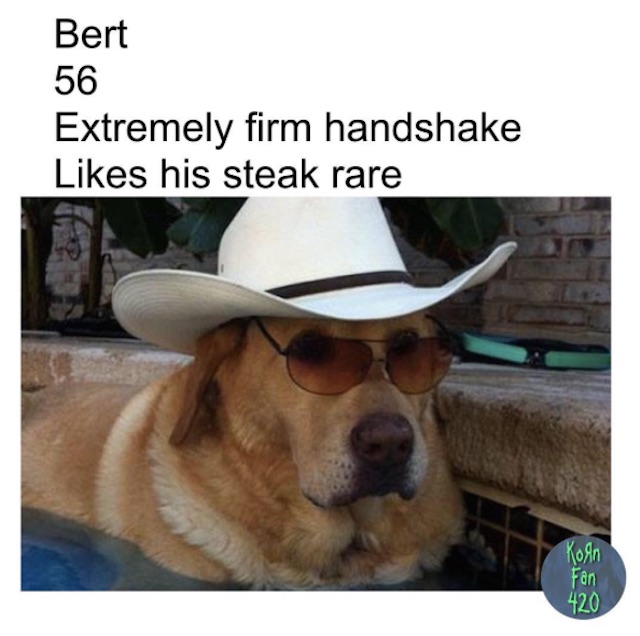 You said once that you think stand up is dead. Can you expand on that? Do you see internet memes as the primary vehicle for comedy now or in the future?

I don’t really know if stand up is dead because I’m not like involved in it or anything, but I don’t really think anyone leaves the house anymore. I’d rather just stay at home on my phone and laugh at stupid pictures than go out to some comedy club or someone’s house and stand around when they tell some jokes. Also I don’t know if anyone feels like they have the time to sit down and watch someone do a set on Youtube or something. People want things instantly. I can totally see Twitter, Vine, and general memes on Instagram and Facebook as the primary vehicle for the future.

Do you see yourself doing this for many years, or do you plan to move on to other things?

I think it would be cool to do this for a long time but I don’t really know how long people will even be into this. I’d really like to write jokes for a show or make things for bands or do the pictures for the hard times or just regular graphic design. I work in a factory right now, and I have for a few years, and it would be awesome to turn memes or graphic design into a job.