JUSTICE ABSCONDITUS, OR, WHY I WRITE VERSE PLAYS 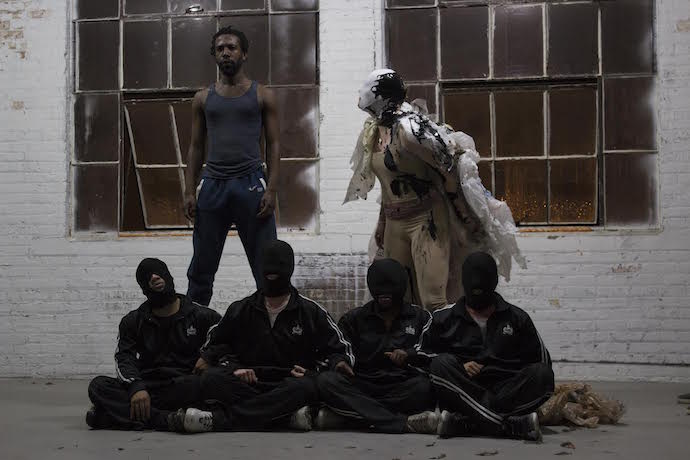 “I’m dead so I can be in two places at once: Everywhere and on the Internet.”—Prologue, DYoTL

I wrote my first verse play, The Commandrine, in the early 2000s.

It was a self-resurrection. An act of frustration, perversity, and release.

I was adjuncting in Chicago; I had one day a week to think about anything other than grading; and I was working on my second poetry MS. Like a lot of poets, I wanted to make sure this new MS was nothing like my first book, The Red Bird.

I made a list of prohibitions: no unlikely personae; no dramatic monologues; no epithets, apostrophes, or ejaculations (O Rose thou art sick!); no neologisms or anachronisms; no eclectic lists; no riffing off current events.

Thus bound in ribbony no-nos, I was a-cutely stoppered, and I couldn’t make a peep.

So one day I decided to give myself permission to employ/enjoy every one of these forbidden tropes.

And I unleashed! A verse play sprang from me: royal jelly, frog spawn, a viscous spring. Like I had the bends, some kind of excess ecstasized from my unbending limbs. Clad in rime, I hauled myself up from the deep, with my tedious (tho brief!) operetto, The Commandrine.

The Commandrine tells the story of four submariners who don’t realize they’re lost at sea. This leaves them vulnerable to the Devil and immune to The Commandrine, a female head of state who tries to coax them back to shore. Instead they choose to stay at the bottom of the sea—unwittingly posthumous—carrying out their chores and drills made up largely of word games: puns, lists, epithets, apostrophes, ejaculations.

Moreover, the play was an occult conjuration of a recent permanent submersion (recently permanent!): the sinking of the Russian submarine Kursk. Its botched recovery and loss of the crew was an early embarrassment for then President Vladimir Putin, who would never again neglect the Theater of Power.

There is no power without Theater. Looking into its fetid Globe, pustulent and prurient, we learn something about Power. Maybe something we already knew. After all, we are all in Power’s grasp. Yet the truth about Power cannot be (normally) uttered. It is proscribed– obscene.

So scribe it. Bring it on the scene.

“You see it here, but it’s happening there”—Julian Assange, DYoTL

We moved to the Rust Belt in 2006, from Tuscaloosa, Alabama. Immediately before: Katrina, or, Katastrophe. A naked lunch: a frozen moment when everyone sees what’s on the end of every fork. Now, in South Bend: everyone’s pain out on the street. Love is a couple in sweatsuits standing in the snow holding a window air conditioner, waiting for the pawn shop to open. The Wooden Indian motel has no interior at all: its occupants visibly reside in a scaffolding of catwalks, stairways, electrical closets. “NO COPPER” spraypainted on the sides of half-eaten houses. Taking my place in line/in the line-up at the Social Security office, in the maternity ward, at the Board of Health when the latest flu comes around. You see it here… and then, suddenly, it is 2008 and happening everywhere: Athens, Floria, Argentina, the UK, Connecticut. Global financial collapse.

The Rust Belt, “left behind”, “behind the times” due to the decline of US manufacturing, somehow hosts a sped-up experience of time. You see ruin here—early and permanent. This Rust—a static conflagration, before the glamorous world will admit it is in flames. You see it here. Anachronism as occult lens.

The Rust Belt—or, any obscure divot as the center of the world, super-sensitive and irrational and irritable, curved like a pus-y blister, containing all possible images, distended, foreshortened. A polluted eyeball, a Globe. A model Theater. 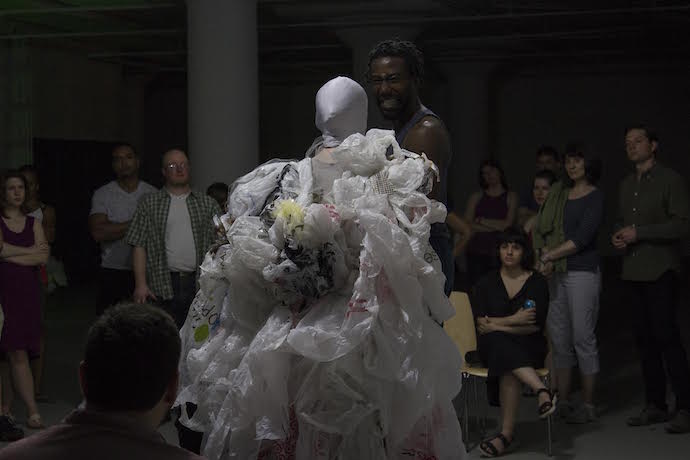 What is the obscene? Plainly, the obscene is that which must be kept out of sight/off the site/a para-site. But like the dead, and bedbugs, it keeps coming back into view. Another name for the Obscene is the Political. The Obscene keeps driving itself into my plays, onto my pages, onto the stage, into visibility, into audibility (NB: my plays have been performed various times, in whole or in part, twice in a reclaimed storage facility, but never on an actual stage). You see it here. The second verse play I wrote was Pierrot Le Feu, an Epithalamium, a play rightly ‘invaded’ by a troupe of dead women—the desaparecidas of Juarez. These women perform as a classical Greek chorus yet bear and speak their own names and tell their own stories, as archived in the 2003 Amnesty International publication Mexico: Intolerable Killings. They perform a series of unperformable, impossible dances which channel all the vengeance of the cosmos, and they excoriate the audience: “It is an Impiety Unto Heaven that You Don’t Care.”

The Contagious Knives performs another kind of submersion-and-resurrection, stages an obscene political arrival, an exhilarating and gruesome leak. This play is a word-spangled, ecstatic counterspell, a spell of protection for Chelsea Manning, who was at the time of writing awaiting court martial in solitary confinement in an underground cell. It’s a jailbreak movie set in Hell and stars the Devil, a Swan, Louis Braille, Narcissus, and Lynndie England.

But the jailbreak doesn’t work out. In the final scene, Chelsea Manning sings a song misremembered from the Merchant of Venice, that play that speaks from both sides of its mouth and says more than it means to about (In-) Justice. Contagious Knives is a perverse, inverted-MoV: it slits its own throat to let out the truth MoV inadvertently exposes but cannot admit about the failures of Justice. Contagious Knives is Obscene.

Dead Youth, or the Leaks and my libretto Pistorius Rex are obsessed with the inability of Justice to survive the Anthropocene. All injustices become the same injustice—the predatory nature of humans on other humans, species, the planet, the kosmos.

Is Justice is a human invention, or an alien inhuman intervention? If we still think there could be Justice, given all the power imbalances of this planet, will it arrive through collectivity, through forming an anti-individualist cobody, or might it derive as some inhuman strain? Some mutant allele, stuttering into shape, some error in the code, the arrival of a seedpod on the flank of an alien ship? A goddess? A sisterhood? Art? I keep wanting to know the answer, keep staging and restaging Justice’s entrance only to arrive at its expulsion from this fetid globe. The dubious figure of ‘blind’ Justice, the confusion of the sword and scales, the enfiguring of Justice as a draped, overburdened, blindfolded woman, stuck up on a pediment—these iconographies admit the that, at least in Western culture and its colonial franchises, Justice is set-up; Justice is a set-up. As any subaltern knows, and the privileged should admit, the quality of mercy is indeed strained, strained to shrapnel, to a stiletto point, to a protein coat, to smithereens, and if it ever existed it is now scattered through the earth like disjecta membra, denatured and perplexed. 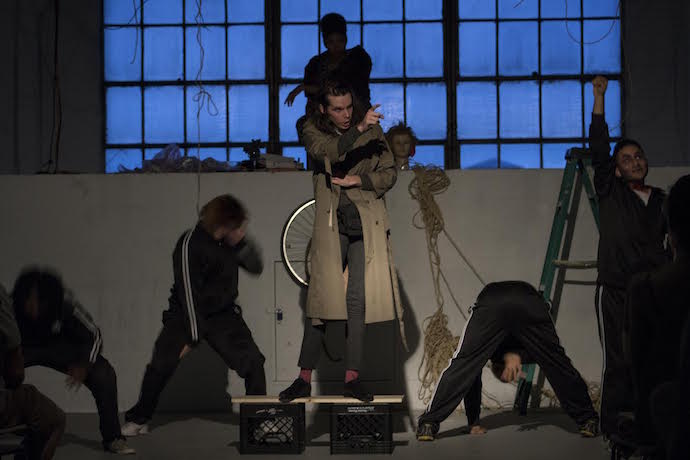 5) BADLY-WIRED ALLEGORY, OR, CRIME AS HOPE

But this ripping apart is not without consequences; this Art-crime makes a rip in the cosmos, releases radiant black light. It has the dimensions of Atrocity but it is Atrocity’s double: pure (but dubious) potential. I don’t know what will happen when it hits the ear-drums, the breast bones, the membranes of the audience; what joint body it will configure, what configuration or conflagration it will prompt. I know only that this current is released (formally) by what I have called ‘badly-wired allegories’.

The badly-wired allegory derives its power by eroding traditional allegory’s binary structure. Whereas classical allegory is a stable, conservative form, easily decoded, a 1:1 relation, my relations are in flux, over and under-doing it, missing the mark or devouring it with Chronic (Chronos-y) overkill. The protagonists resemble ‘real’ celebrities, but are also instrumentally different, counterfeits, effigies with ambivalent relationships to their real world ‘doubles’. What kind of overtide of unstable energy is created by this swelling and collapsing doubling of the world? Because they cannot maintain stability, a surge of current leaks out every orifice of these plays. This is their political force.

Another name for this current is the Virtual. When the binary collapses, when the zeros-and-ones of which the digital double universe is constructed refuse to stay in their slots and begin to amount to both-more-and-less-than-themselves, simultaneously, a bolt of lawless current is released, and that’s the Virtual. Such paradoxes are impossible engines; they run the universe and they run my verse plays.

This current might go anywhere. The play exhausts itself, snuffs itself out, but the current has gone someplace else, to investigate, to instigate, to irritate some other atom or datum into motion. Its endpoint is unknown.