There’s a baffled rage that comes with seeing a defaced photo of yourself. If you ever made a weird face on Class Picture Day, you know what I mean. The defaced subject is you but not, real but caricature, and it’s often accompanied by a word bubble in which you say something sexually incriminating about yourself.

But is there a way to deface respectfully? Even lovingly? 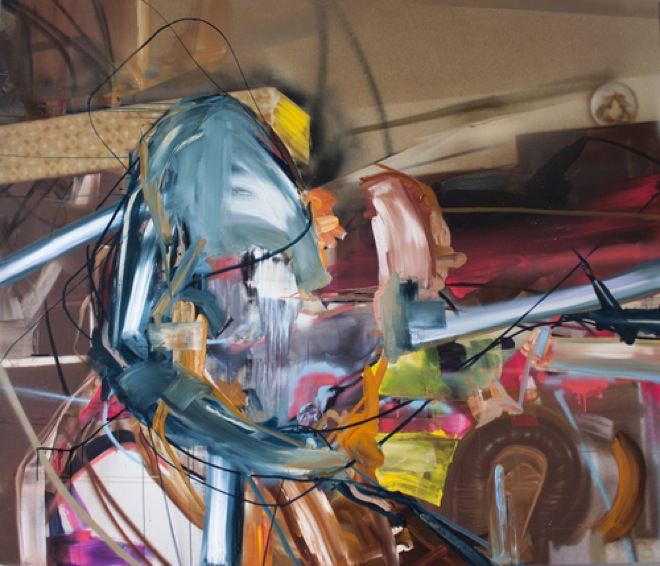 In Joshua Dildine‘s “Photo Series,” the artist makes a canvas of an old family photograph, then uses acrylic, oil, and spray paint to deface them into works of art.

In these paintings, the photos’ backgrounds tend to remain untouched: “In Good Company” features a field, a patch of flowers, and blue sky, all warped and sepiaed by time. In the foreground, meanwhile, the artist obscures the photo’s original subjects with a glob of metallic spray paint resembling a crashing UFO or a beached whale. Some paint covers the photo entirely, some offers a translucent window. And where a person originally stood, the distorted figure of a newer, tinier person has been recreated.

This seems to be at the heart of the artist’s project: The blurred lines between expression and representation.

“My process navigates through three different stages,” Dildine said in an interview last June. There’s construction (the photo itself) and deconstruction (the defacement via “gestural marks”), but most of the artist’s time is spent on the third step of reconstruction: “I quickly move to harmonize the photo with paint. I ‘reconstruct’ the context, using some visual information left over to be in dialogue with gesture.” 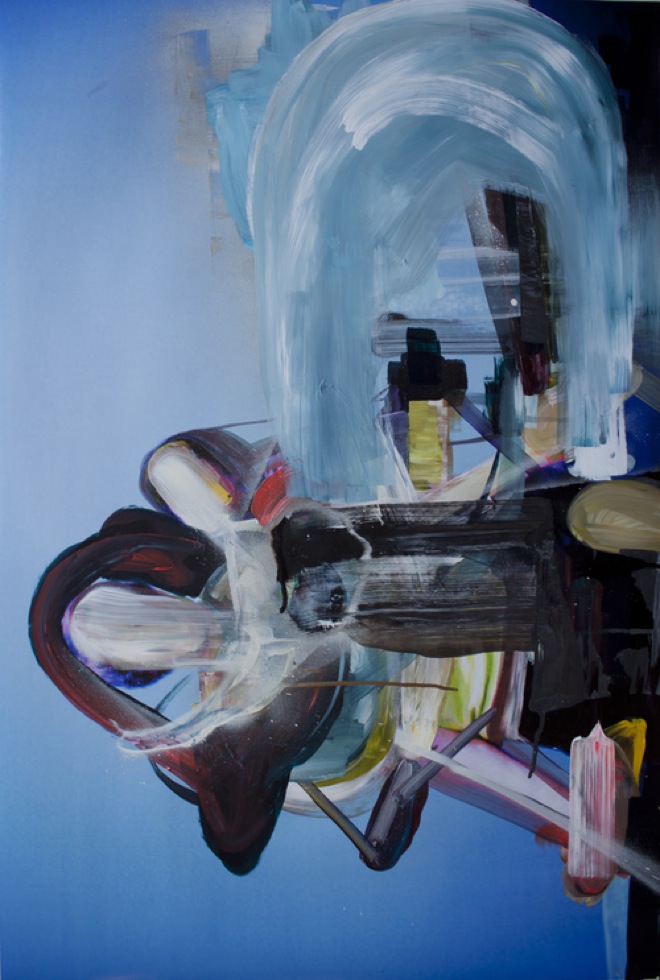 The abstract paintings Dildine creates outside of the Photo Series are marked by a similar attention to composition, color, and intent. What they lack is the sexy hook of the Photo Series–the invitation to the viewer to draw overt connections to a world that looks more like my own.

“With each photo, I have to decide how much [of the original photo] will stay and how much will be paint,” Dildine told me over email. “There is a greater range, especially in the upcoming work, of showing more and less. I like to tip it just enough for it to become something more than its original context, while still allowing photographic clues to shine through. It gives the viewer the opportunity to excavate the work with their own personal baggage.”

The series’ effect is of the sort of film scene in which a man in a phone booth’s gaze is diverted to a yipping dog across the street, and so the camera (and the audience) refocuses from foreground to a background to watch this dog act up, nipping on the pant cuff of a stranger. It’s only when the camera snaps back to the man in the foreground that we see the man has been mutilated beyond recognition. 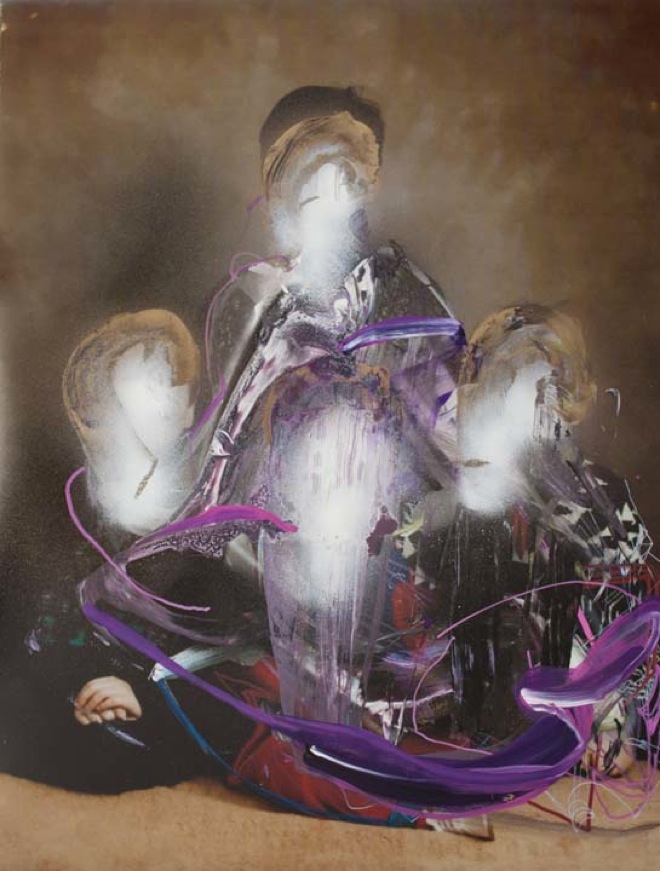 “League of Losers #2” complicates this pattern. Here we are offered a familiar photo trope: A dated kids-only family photo, almost certainly taken at the mall. But now the faces of each kid has been whited out. It’s spray paint, but it looks like the vindictive erasure of an ex with a grudge. And while the reconstruction continues where the ex would stop–sharp purple acrylic strokes snake around and between the family members–it’s the painting these strokes animate, not the losers.

“At first it was questioned and concerning that I was painting over my parent’s engagement photo,” Dildine told me, “but family and friends develop an exciting sense of ownership and ‘fame’ when they know they are being painted over now. I also like how the tone and the feeling of the snapshots reminds perfect strangers of their own family photos from the past. The paintings make them an equalizing ground, making the sense of memory personal for them as well.”

For viewers, it signals a break from the schmaltz that family portraiture can breed–not in favor of cynicism, but of investigation. Dildine thinks of the photos as a “visual springboard”: “I choose awkward photos (because I have a lot of them) with funny faces with interesting colors or patterns because I think they will be fun to paint. What I like about the photos, aside from the visual in combination with the paint, are the emotions that they evoke from the subjects and viewers as well as the sense of familiarity and, at times, embarrassment that they can bring out.” 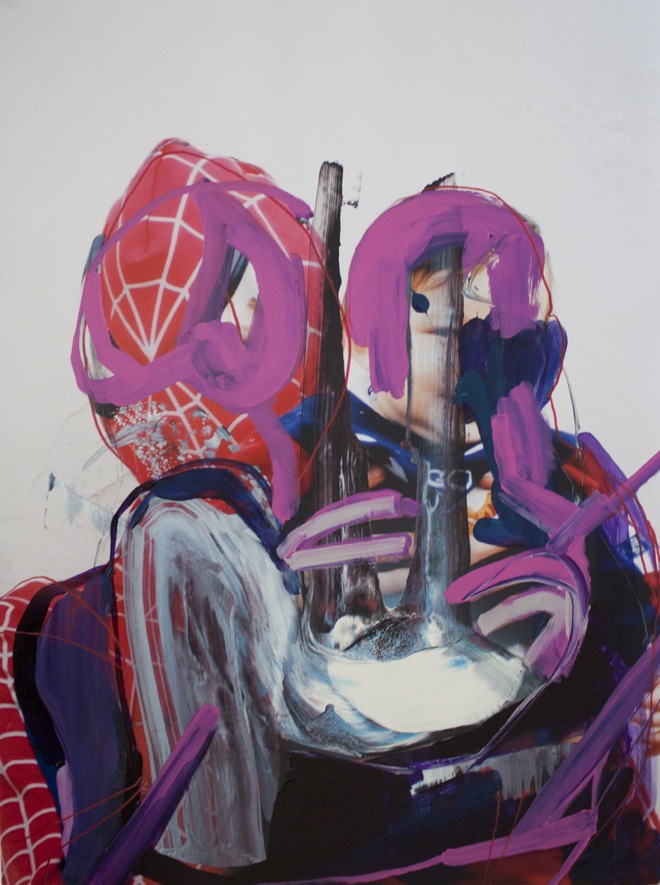 In “Storytime is Not for Sitting Quietly,” what was originally (I think) a photo of a baby held up in front of an illustration of Spider-Man becomes an impossible portrait of Spider-Man himself holding the baby, both figures partially obscured (defaced?) by the artist’s bold white and purple strokes.

The paintings’ titles often read like the track list from the debut album of an R&B artist who knows he’s on to something: “Prepare to be Floored,” “Sweet to the Core,” “Dear Timid Embracers of Change,” and “Booms Like Crazy.” To Dildine, these titles reflect his and his family’s sense of humor while also avoiding, as he puts it, “coming across as angry or appearing that I need some sort of psychiatric evaluation of my mental health in relation to my family.”

The magic of Didine’s layering is that the orientation our brains usually bring to an image (“That’s a real person standing in front of a drawing”) becomes either impossible or beside the point. Likewise, the artist’s intent (be it malice or kindness or indifference) melts away as well.

What we’re left with is pure expression, pure play.