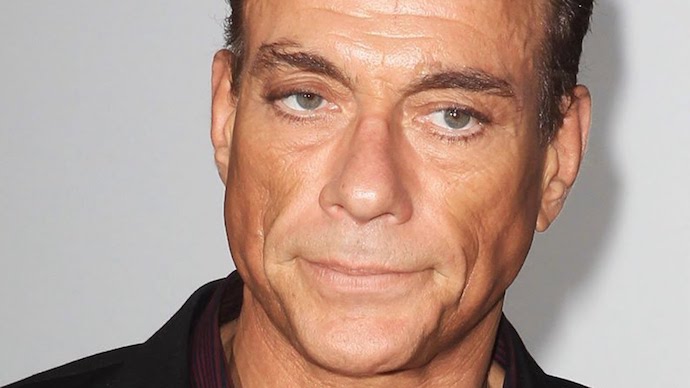 A Note on JCVD: It is undoubtedly true for any writer, even one of quality, that there is substantial hazard in attempting to eloquently encapsulate the oeuvre of JCVD. One sensibly fears that by stepping into the shadow of a giant, one may find oneself being sloughed off the underside of a giant-sized brogue. This spine-stiffening hesitation, however, is somewhat dulled by the comparatively enlivening sensation of proximity to JCVD’s greatness. The more limited, if worthwhile, mission of simple laudatory tribute to JCVD is equally problematic. On occasion of his recent return to critical celebration in The Bouncer AKA Lukas (2019) – “This one is a must see!” rottentomatoes.com – one may leap at the chance to write a sympathetic missive, but the course remains perilous. Can the author escape from mere vainglorious gratification and allow a luminous pen to accurately spotlight the noble subject in all his dramatic heft and testicle-pounding fury? It is a calculation that brings us to our current state of affairs where we are left sorely wanting. While promised the delicious thrill of a deep dive into JCVD, we are instead presented with an extended testimony to the author’s lack of fortitude [i]. An authorial feebleness in stark contrast to the vigor of the subject, who from 90s Hollywood blockbuster to blasphemous V.O.D. purgatory shows a strength of spirit and razor focus attributable to his high-level, competition-honed, martial arts training. The author, on the other hand, is a lazy P.O.S. barely capable of lifting his foot off the ground – much less a fully extended roundhouse kick – and just lurches about his day to day in a slow and increasingly monstrous shuffle toward a diabetic grave. Nonetheless, there is some clarity in the effluviant trumpet of failure, if only through glaring contrast to the angel’s choir that is JCVD, and the attempt is hereby presented. After all, the splinter of a sliver of a shattered, piss-stained shard reflecting greatness remains greatness still.

Bloodsport (1988) ^ – Some might say, “It’s all downhill from here.” That is an uncharitable view. Further, the statement could be construed in two totally different ways, as in measures of quality vs. rapid movement, wind-in-the-hair excitement. In that case: Allons-y!

Cyborg (1989) [ii] ^ – A Point Break surf punk has eyes made of diamonds. Dee Snider is swollen with HGH. Crucifixions on the Bowery and a shogun in Atlanta silently rappelling. Knees flexing minutely, pirate outcasts lightly bob in celebration. Two big thumbs up.

Death Warrant (1990) ^ZZZ – An undercover op in a maximum-security pen. Bare ass shower scenes in 3, 2, 1: shank to the neck and a proposition for a BJ. “Cover your ass Delacroix, and I mean that literally.” Organ harvesting like Falun Gong and a Sonny Crocket suit five years too late.

Double Team (1997) [iii] ^ – Tsui Hark directs. Coca Cola (TM) is a refreshing and tasty beverage that will satisfy your every need. It is affordable and available everywhere fine beverages are sold. One thing many people don’t realize about Coca Cola is that it can comfortably be consumed across many different temperature points, increasing its already formidable popularity across cultures. OMEGAÒ watches (Manufacturer of prestige Swiss watches since 1848) are the finest watches around and will satisfy your every luxury watch need. Enjoy one with a Coca Cola (TM).

Kickboxer (1989) ^ – Anyone who doesn’t thrill to a Bloodsport/Kickboxer double-feature is a fucking corpse.

Kickboxer: Retaliation (2018) ^? – I turned this off before JCVD showed up. I waited as long as I could; Mike Tyson’s marble-mouthed appearance was the proverbial straw. A barely recognizable Christopher Lambert was there too. I am certain life is cruel and inevitably ends in death.

Lionheart (1990) ^? – JCVD’s Instagram recently mentioned Lionheart 2 is in the works.

Nowhere to Run (1993) [vii] – A prison transport bus rarely gets where it’s going. It is often undone by a charade of fast cars and loose women. A desert sunset and a buried friend. She sees a daddy in those gruff eyes. He can repair a bike and roundhouse kick a real-estate developer. A younger Culkin sketches his ennui.

Replicant (2001) ^? – Bloody lady in a loft, JCVD kicks her in the face. “You’re a bad mother,” he says. Lights a 20-dollar bill on fire with a Zippo which he then uses to ignite the woman, whom he has doused in alcohol. He takes a swig of said alcohol. Hands like stigmata. We’ll make a new baby. This time of you. Ringo Lam directs.

Street Fighter (1995) ^? – I spent many hours playing this video game in high-school, and while I was never the skilled button-masher of many of my peers, I found solace in Blanca’s easy moves and standard attack patterns and could take out just about any other character save Chun Li, who was somehow impervious to my electrocution attack. Fun Fact: Raoul Julia (M. Bison) was eviscerated by cancer and died during filming.

Universal Soldier (1992) [ix] ^ZZZ – JCVD in ‘Nam. But he’s Belgian, like Hercule Poirot. Dolph is there too, but he’s Swedish. Like Kurtz, Dolph appreciates trophies of the dead. Roland Emmerich’s Hollywood debut. EXTERMINATE THE BRUTES.

Universal Soldier: The Return [x] (1999) – Dolph-less. Nü-Metal and jet-skis. Flashbacks of the first movie’s flashbacks. A zombie sleeps in an EZ chair. Y.A.I.R. (Yet Another Intrepid Reporter.) The strip club has a computer room. WWE’s Goldberg is a small, dull, shit-coated gem. Wikipedia says, “This was Jean-Claude Van Damme’s last widely released film until 2012’s The Expendables 2.”

[i] According to IMDb, Jean Claude Van Damme has logged a total of 71 Acting Credits, of which a mere 19 are presented here, mostly concentrating on the period of JCVD’s superstardom and subsequent plunge down a hill of cocaine. His acting credits go along with 13 credits as a Producer, 11 as a Writer, and 87 as a Self. The last curious category including the reality show JCVD Behind Closed Doors which I have watched every minute of and mostly takes place in Eastern European discotheques or the rococo receiving rooms of regional despots.

[ii] The studio put this film together on repurposed sets and wardrobe for a planned and failed Masters of the Universe (He-Man) sequel. Director Albert Pyun, also slated for He-Man, wrote the script over a weekend. This is the first film of Pyun’s Cyborg Trilogy, a series of films exploring the complex relationship of man and machine. The films Cyborg 2 and Cyborg 3 are not part of Pyun’s trilogy, however.

[iii] Former NBA star Dennis Rodman – as an arms dealer who wears pink vinyl pants, a silver corset, and has his hair dyed like a rainbow – is the presumed draw here (aside from JCVD natch) but hardly appears in the film until 45 minutes in and is barely utilized then aside from myriad mumbled lines of the variety, “That’s what you call hang time,” “Slam dunk!” et al. Apparently not the actor he was a basketball player or international diplomat. Mickey Rourke also appears not yet totally ravaged by surgery and disregard.

[iv] Hong Kong mega-director John Woo’s Hollywood debut has a strong cast surrounding JCVD and a decent story, though Woo’s original idea to make this a Kurt Russel vehicle would have been preferable. More political consciousness than your standard JCVD flick. For the sake of thoroughness, I also watched Hard Target 2 (2016) – JCVD does not appear.

[v] Watched this on Youtube at a Starbucks in Tokyo next to a sleeping salaryman. Surprisingly solid C+/B-.

[vi] The third major Hong Kong director for whom JCVD helped orchestrate a Hollywood debut. If this for nothing else, his cinematic legacy is well established. This film is also like the 8th or 15th time JCVD plays twins.

[vii] Have to think JCVD was miscast here, or it came too early in his career before he’d figured out the nuances of this acting thing. Even so, while it has the makings of a good flick, with a stronger JCVD it still likely would have fallen flat on the back of glacial pacing and lack of ball-punching splits. Joe Eszterhas, of Basic Instinct & Showgirls, wrote the script. According to Wikipedia, he also did a 5-day rewrite of Blue Thunder, which remains a quality flick as well as a personal favorite.

[viii] JCVD’s directorial debut is a near exact remake of Bloodsport but not good.

[ix] At this stage, JCVD plays goofy humor pretty well. Drama less so. Shame he wasn’t given that more often. Co-star Dolph Lungren is solid all-around. Ice-T’s Body Count surprisingly shows up when the credits roll. I bought this CD when it came out and saw them live at the first Lollopalooza.

[x] Passingly diverted at the beginning, open browser looking at earthquake evacuation routes at the end.