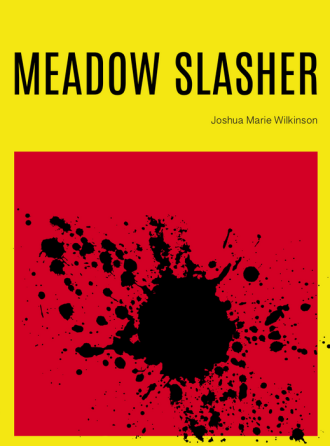 Before Joshua Marie Wilkinson’s 2017 Meadow Slasher, there was Selenography, the 2010 collaboration between Wilkinson and Tim Rutili. Wilkinson provided the poems, Rutili the polaroids; the result is an opaque investigation into poetry as testimony, witness, being there. In this way, Selenography already touches on much of what Wilkinson’s new collection explores, a primer of sorts for the “presence” that Meadow Slasher insists upon. More curiously, however, is the trajectory Wilkinson follows from testimony to confession in his most recent work.

There is, in fact, something of a through-line between these works, or, at least, a portal between these two explorations of witness to confession. Two lines in Meadow Slasher bring this to mind: “So you’ve been into the photographs? / What’s not desire’s aperture.” While this reference to photographs may not be a likely callback to Selenography, it nevertheless opens up the possibility that Wilkinson is much more invested in the lyric self than what his often distant, removed poems attest to. Indeed, the epigraph to Selenography clues us into Wilkinson’s ambivalence toward the necessary presence of some self in poetry. The epigraph comes from Graham Foust, “Each song / is a room / in which I’m not allowed to vanish,” but in Meadow Slasher, Wilkinson offers an unexpected and vital twist—in these poems, the self is in far fuller view to try to stave off the vanishing “you” at risk of slipping away.

In Meadow Slasher, Joshua Marie Wilkinson immediately invokes persistent debates and concerns surrounding confessionalism—elegance in the grotesque, artifice and “the dirt,” and especially the outrage at the very label itself:

I am writing to you

from the watery grave.

Just don’t try to clobber me

with your shitty poems.

These lines position the collection’s voice here as well as the emotion (or at least the possibility of it). Immediately, the poem shifts to a strong and negative attitude about “shitty poems” that “clobber.” Typical of this collection, there’s quite a bit of slippage between who is voicing the lines at any given moment—among the questions, the scene-cuts, the maxims that seem sincere yet come with a “believability” caveat—the poems here are suspect as “truth” or “fact.”

It’s this point that would be worthy of consideration: how the multiplicity of voice(s) here continue to refine and nuance our view of a “single” confessor or whether we must expand the notion of “confessional” poetry (if we want to include Meadow Slasher within this label, at least). Perhaps Wilkinson himself does not want anything to do with the label—Meadow Slasher speaks frankly about this matter at the close of the book: “It’s not confessional, motherfucker: / it’s a constative fact.” In other words, in what way does “confessional” presuppose a self that stands in stark contrast to the speech-act, declarative bound “constative fact”?

In short, Meadow Slasher addresses the inescapable question of address head on: what do we do with the “you” in a seemingly confessional text? Wilkinson’s work deeply invests itself not only in a confessional “I” but also in the “you” on the other end of the line. And, complicating things further, the book elevates the stakes of this prospect of communication by demonstrating how prone such communication is to breaking down. Such a move begs the question as to how communication breakdown lead to outright relationship breakdowns:

What if what won’t

come back to you

How much more talk

will it take to sever us?

These lines are revealing for the collection—is it the possibility of (renewed) communication that the poems want, even at the expense of continuing that communication only to have that talk “sever us”? Perhaps the answer lies in the non sequiters, logic jumps, posed questions (with or without answers), and anti-expectations that rip through this collection. This tension is present at various moments in the collection. For example:

An obsession with what?

But what history did you want back inside of?

The dream out in the miner’s wood, trampling on now.

Can I stay awhile?

I’m thinking about retreating to

no trapdoor, no transom, alright. I got it.

Lines like those above, however, seem to be dripping with desperation when taken in context of the collection as a whole, and for every phrase like “No turn, no volta, no nothing,” another pithy axiom comes along that lures us again into what’s already been revealed to be a bleak and empty promise: “What scrapes you heals you,” Wilkinson writes, only to acknowledge its falseness in writing, “That’s not right, but there is a pause before that clippery voicemail beep.”

It’s that “pause” that compels this collection—the anxious awaiting for a response, a solicited voice, a prompt, anything that gives a clue that there’s somebody still at the other end of the line. That pause makes possible the poems’ surface-level vulnerabilities, though the book resists letting us read these “confessions” as “true” or as more sinister “calls-for-help.” Most telling is in the “bedroom diary” entry that Wilkinson gives us of his very own:

What’s at stake? That would be

desire’s rootless claim on the sensory.

My fantasy is so simple it’s pitiful:

you turn around & ask me to unhook your bra.

Then, you stand at the foot of the bed

& somehow you undo your skirt.

This question of intent is what may, at its base, be most fascinating in Meadow Slasher. A far cry from confessionalism’s ability to “get something off your chest,” this collection unloads these feelings to keep that pause on the other end of the line open, holding on to what may already be out of reach, beyond resuscitation, while still undergoing the death rattle of failed communication or a failing relationship. In the end, Wilkinson proposes that confessionalism is not nearly as one-sided as many readers might think—and that opens up a whole can of worms for us to reevaluate.