It Was Acceptable in the 90s 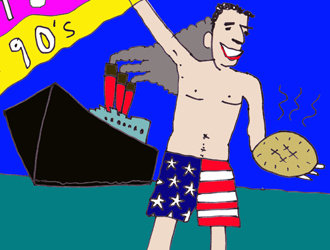 As pollen lilts down from springtime trees, there’s something more air apparent and far more distant than last year’s blossom wafting into our cinemas. It’s the 90s. Low, behold, and refamiliarize yourself with those flashback sensations of retro-CG spectacle and pre-9/11 ribaldry. A couple of weekends ago, the Clinton years stormed multiplexes across America with two retrofit pictures born of the era – American (Pie) Reunion, which at least brought together an originary cast for an aged reromp and brand-new “celluloid,” while James Cameron merely pushed some buttons, requesting that we live Titanic all over again, but in Real 3D. That same weekend, I was privy to attend a screening of a forthcoming film, Vamps. The little indie charmer reunites the main creative team behind Clueless, namely writer-director, Amy Heckerling, star, Alicia Silverstone, and character actor, Wallace Shawn in a Manhattan world plagued by a decidedly more au courant craze – vampires! I thought this preview night at BAM cinématek would be the end to my rave flashbacks and Friends retreads, but last night I cozied up to a little alleged scarefest called Cabin In The Woods, a delightful piece of fanboy folly, that got me reminiscing about Joss Whedon: The Early Years. Remember Buffy? Remember, it was on the WB?

Why the 90s? Why now? I remember working in the Industry, not-all-that-long-ago, for a company that knocked off (“digitally reproduced”) art works for use as background set dressing in exorbitantly budgeted crap pictures that could afford our marked-up wares. So, naturally, I kept my eye trained on those projects marked “pre-production.” This was 2006 and everything was primed to go 80s. On my attack list were projects which hoped to revamp Masters of the Universe and Conan the Barbarian. Already, a buzz and whir could be heard from the nearby Paramount lot for the retread that caught like wildfire – Transformers. The children of the 80s were coming into mogul positions, I was told. So, of course they would bring back their childhood toys. I guess that makes sense. But I suspect that there are no moguls coming of age now who yearn to slide their member but one more time into that warm apple pie, nor does one really feel the need to engage in that refrain, “Near… Far… Wherever you are.”

Well, I guess far they do, because Titanic 3D just broke the world record for opening weekend box office sales in China. Nearer, however, Titanic 3D was something of a disappointment. I think it opposes the model that drove spunky execs to bring back their shape-shifting autobots: namely, from its very, rugged cultural definition, America likes its spectacles removed from spectacular melodrama. As a weepy, Titanic was pretty culturally embarrassing. To the tune that I refrained for almost a decade after its release to see the thing. My telling memory of the kind of obsession that it engendered was how the fat kid in high school, who we all knew was gay but never copped to it, loved to go home afternoons with the blond, popular girls and watch the double VHS set, again and again, crying. And I won’t lie. Initially, I cursed the thing, when I finally watched it, for its biliousness, its calculated marvelousness, then found myself in tears – beside myself – on a loveseat as soon as those pan flutes began that ubiquitous melody and our aged protagonist plopped the priceless jewel back to its watery depths. We all bought into it, lock, stock and Quebecois barrel, and that’s something of a shame.

And shame is what drives the American Pie movies, anyway, isn’t it? It’s about your parents seeing you fuck a pie, watching you go through the mortifying rituals of puberty, right? Okay, I’ve never seen one, but now they’re upping the ante with bi-fold layers of social embarrassment – age and failure. Our cast is older (read: undesirable) and, with the exception of Alison Hannigan whose future is gilt thanks to syndication deals with How I Met Your Mother, everyone’s golden years are pretty well behind them. To pique that career dread, they’ve even brought in the physical apotheosis of career death, Tara Reid, whose 2.5 minutes of fame were found when a “wardrobe malfunction” exposed her boob job scars to scores of red carpet paparazzi.

ReVamping Clueless sits more easily in my stomach, as Clueless always had heart. So does Vamps, a charming little sleeper that casts Alicia Silverstone and Gossip Girl’s Krysten Ritter as “literal bffs,” two Manhattanite vampires, sired by Sigourney Weaver, who have taken a no-kill oath to only feed on rodents, using little flexie straws. The movie sports a rambunctious heart that is at once celebratory and surprisingly moving, by the film’s end. But while Silverstone hasn’t been this effortless since Clueless, rigor mortis does tend to set in through the film’s second half, in what might have better been suited as a sitcom pilot.  In part, nostalgia is to blame. Silverstone’s Goody pines for Cagney (James Cagney – not even Cagney and Lacey) and Keaton (Buster, not Michael), which makes for an awkward would-be teen movie. Amy Heckerling was at my screening, bemoaning the current state of Hollywood production, setting something of a shrill tone that runs throughout the film, in monologues that berate cell phone use, the constant influx of new technologies and reminiscences over how everything was so much better in the eighties. Someone needs to temper and hone such rants on contemporary culture. Heckerling’s opinions on misogyny, ageism and class are necessary and vital in the popular sphere, but, as with her last flop, I Could Never Be Your Woman, her bitter tone makes these critiques pretty unpalatable, as she begins to sound like someone uninvited (or perhaps unwilling) to party in the 21st century.

Like Vamps, which has been sitting on a production shelf for a little over a year, Cabin In The Woods was shot long before its release. Since production, its beefy star Chris Hemsworth has become Thor and Joss Whedon has moved on to helm the mega-blockbuster The Avengers (starring Thor). The three-year delay that met Cabin was, in part, due to Whedon’s unwillingness to convert the quasi-horror flick to 3D (unlike Mr. Cameron). I suspect it was also on account of a marketing team’s head-scratching. The film is a tough sell, in part because it constantly defies your expectations. As a camper van hurtles into a mountainside tunnel, a CGI hawk hilariously careens past the camera. We trace its serenity and the bombastic nature of the shot, which harks to almost Lord of the Rings-style natural majesty, only to start but one second later as the hawk hurls itself into an invisible, Matrix-like grid in the sky! Think Evil Dead meets The Truman Show and you’re about halfway there. To say much more would give away the thrill, but Whedon does with the teens-in-a-cabin-in-the-woods horror set-up what he did with an unlikely 90s tale about a blond cheerleader with a penchant for vamp slaying – he divests the situation of staid generic hokum and allows it with the exhilarating maximalism that birthed the cult of Buffy and ensures that shows undeniable cultural legacy. This is another project destined for cult worship. I haven’t had as much fun at a movie in my 21st century memory as I had last night at my screening of Cabin – and neither did my audience. “This movie better not suck,” the fanboy behind me grumbled to his friend. By film’s end that vitriol was replaced by a breathless, future-nostalgia. “I’m going to have to watch that again someday.”