Any fan of modern thrillers has seen 28 Days Later, which for a zombie flick proved itself to be more than a predictable showcase of gore and horror–it was about sizzlin’ Cillian Murphy and his will to survive among his frenzied comrades. Another film about panicked pretties, Never Let Me Go–based on the Ishiguro novel–is a bittersweet tale about nubile clones in love. What do these films have in common besides leaning on complex themes of extra good-looking people whose organs scream lunch? They were both written by Alex Garland, whose latest film is Ex Machina–which he both wrote and directed–a first for him. Garland doesn’t stray from the cerebral questions of fresh flesh he’s built his career on—we are still vessels for trade and often nourishment–ingested or psychological. And his characters are still determined to roam free minus the threat of their own redundancy as living people.

If you’ve seen the trailer (among other bullshit trailers showing us Jack Black’s latest reunion tripe or that stupid Facebook horror Skype movie) you know the film’s about Ava, a cyborg/robot/gynoid. Her face, hands and feet are flesh, but the rest of her body is a transparent warehouse of metal and light, much like those ancient landline telephones with the clear casings that exposed the inner workings of circuits and variegated wires mingled as conduits of energy. A juxtapose in all the gleam and flash of her manmade skeletal system, Ava’s face is familiar and classic. It’s a given that the who actress plays her, Alicia Vikander (A Royal Affair, Anna Karenina), is best known for her roles as a period piece ingenue, the kind whose coy smile sinks men to their knees whether kings or some other upper class gentile ready for a duel. But there’s less grace to this muse as there are the mechanical ticks and flat-affect expressions that separate robots from humans on a good day.

Ava eventually forms a bond with Caleb, played by Domhnall Gleeson (the Irish actor who played the resurrected AI husband in that one episode of Black Mirror). Caleb, an advanced computer programmer, has been brought to the top secret research facility where Ava resides, to work with her creator, Nathan, as a Turing Test (a test of a machine’s ability to exhibit intelligent behavior equivalent to, or indistinguishable from that of a human) administrator. Gleeson plays the pushover nerd he’s becoming pretty well known for (Frank, 2014). For those who eat the weak for lunch, his perpetual wilt of shredded naivety is often the target for abuse. In this case the wielder of that power is Nathan, mentioned above (played by Oscar Isaac—known best as the Cohen Brothers’ Llewyn Davis) the tech genius CEO of a company called Bluebook (basically Google) that Caleb works for.

These characters are the focus of the film, unraveling the intensions of minds picking minds like test mice. At one point the character Ava asks: “What will happen to me if I fail your test? Will you switch me off?” Which in a sense, directly parallels the beginning stages of any relationship when compatibilities are being gauged in the make or break gauntlet of romantic nitpicks. There are deal breakers and then there are circuit breakers, Ex Machina says, “Why not both?” when everyone’s got some secret to hide. More Solaris than Blade Runner, the influence of Tarkovsky is obvious when it comes to the film’s unhurried pacing, its plot’s tense ascension—its use of flashed landscapes as meditative diversions, amplifying technologies which could only exist in worlds beyond now.

Since Ex Machina‘s a story of not three, but four characters who live secluded in a hyper fortified research compound, it must be mentioned there’s also a Japanese slave girl who wanders around mute/perpetually naked, constantly preparing sushi. She’s a vital component to the synchronized disco non sequitur that rules the universe for the solid minute it exists on screen. Aside from that, Ex Machina isn’t going to blow you away with expensive set designs superimposed in the heart of some futuristic metropolis dreamscape. More think piece than foot chase, the film’s essentially about a love triangle–except the situation doesn’t reek of romance, per say, as much as it reveals a twisted look at the relationship between robot child and parent/creation and creator. Think Frankenstein meets a stainless steel Pygmalion, the original Greek version where the sculptor falls in love with the statue he has carved. Replace Aphrodite, who gives the statue life, with a technology called “wetware—which in this case far exceeds the storage capacities of hardware,” connect it to every cellphone and search engine in the world and this is the boundless breath and mind of Ava. 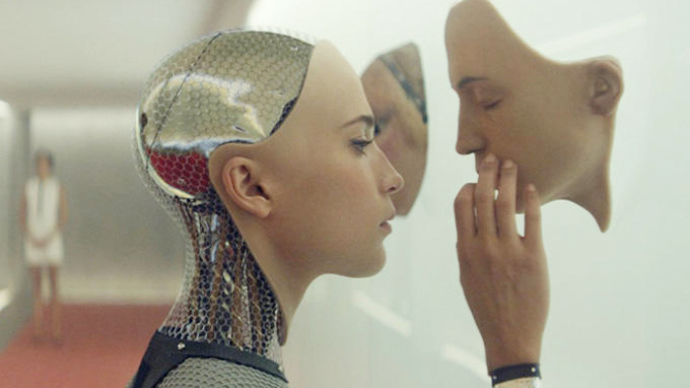 If everything aside from the disco bit sounds serious, that’s because Ex Machina takes itself pretty seriously. The film pecks on the growing fear of technology surpassing humans aka our current station in today’s world of unlimited information. Typically, we’d have to agree that the more intellectual people think they are, the more they think they are immune to their own emotional hell storms. But imagine being a human computer like Ava. Compassion is said to be the essential element, or empathy more, which separates us from sociopaths. But without the proper nurturing and resilience to keep our innate programs pure, who will fend for the sustainability of kindness in the age of the hyperdrive. Will we one day look back and kick ourselves as delicate piles of meat, minds detached in a swirling body of memes? The fact that these questions manifest–a symptom of watching a beautiful robot slowly fall for a gingered tech geek and vice versa while a mad tech genius rages drunk and does synchronized disco–means that Garland, as the writer/director wins, for the most part. But films like Ex Machina get better with time and a touch of patina—and seeing it once, for now, is plenty.