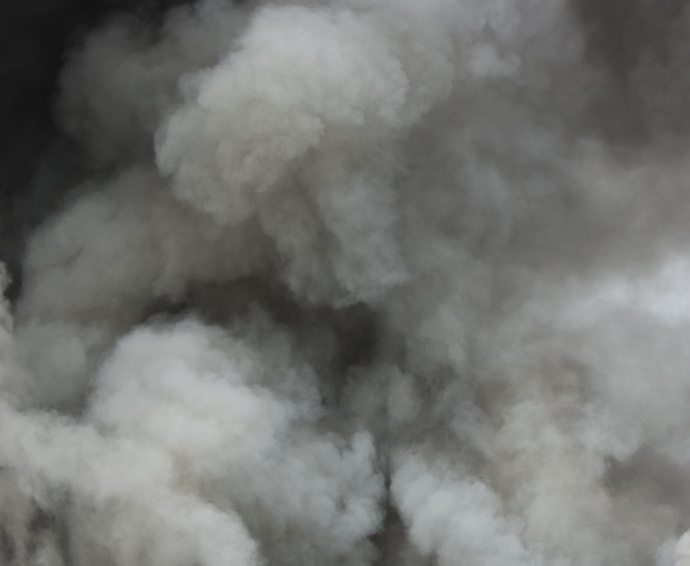 The products of the world manifesting across the globe, and via the use of the sea slipping and clanking and knocking together, the cargo arriving at the coasts and placed into other machines, subject to the febrile tribology of engines, goods are folding and spalling through softer, or harder, or enmixtured matter. Above us, the sun doses the gases, chondrites fall to the wheat. Daylight soars implacably off windows already plump with light. The painted combines moving through autumnal sunflowers, the shadows swinging in secants around the tugboat. Everything is autumnal from the bed. Torn and stormy are the marine agricultures of oxygen and fog.

In many countries youth are standing in the thought-stars that are libraries, moving in the book-star, looking from the upper windows across towns, reading through our human systems, feeling the deflation of erections, designing methods of transport across snowy streets, making with our automobiles soups of slush and grime, salvaging radios, unbending damaged astrolabes, recalibrating sextants, smoothening rudders and wings, refitting in ports the countless binnacles with new nautical brasses. Near large cold lakes photographers wander hilltops full of great odorous ungulates. Across the sea monologs and lectures are being uttered before imposing academies about the tissues of insects, plasmas lodged at the bottoms of telescopes, aromas of estuaries, the bureaucratic techniques of remote courts, the apparatuses of distant ages.

Outside the bed are the pleasant tearing sounds of rockets, the stately continuations of commerceless rivers leading to the interiors of warm and mirrory cities. The walls of the universe are blown near, but seem far from inside the bed.

The only way for our bodies to move around is with the machine of the bed. From here we influence even the flux and eccentricity clipping across the tops of the metal forested stars.

I am older than the bed, though I was born in this time. Who then took care of me in the early beds. What was I. Tendrils and gears and stipules and teeth. We sample.

I explain the oils (here in the bed). I speak from the pillows, officiating and yet imprecise, coughing and with immensities of details I explain the bus that is the bed. This bus. This bus of snot and shivers. This barge over the reef of sleep. This vehicle made of its own shadows. These pillows made of the shoals of swallows, shifting and dark.

Hope and even civilization struck it several blows with planes and bombs and all manner of force. But in it are multitudes of babies, and it is the footing of cities. The forests expire at its edge, smoking, ember-giving, orange and crackling.

The technology of the bed holds to itself yet does so at arm’s length the work of the sun, the bankruptcies of spring, expressed so soberly, it holds the great emotions of cashiers, the shallow euphorias of those who enter playgrounds. Its border is the foundation of sheds. How baroque is the arrangement of tools among the limbs of the sleepers.

Above the beds all across the surface of the globe, an archipelago of cool cloth lacquered with cones of lamplight, their mattresses shuddering soft and responsive to the distant small explosions of the tiniest stars. The darks spiral and smoke around the beds, cooling them, ripening them, the quilts on them tender as rinds.

These platforms are a class of small park. Outside, so many catastrophes, so many varied meteorologies: cyclones, gales, still sweltering afternoons full of the cicadas in their constant desperate apocalypses.

And distant over blue hills are stonewalled national treasuries, a deep and far network of crisp highways stemming quietly and strangely untraveled into the distance, beyond successions of empty and quiet horizons. And on top of one hill, at dusk, a tent visited by owls. All of which pops, as a bubble, and vanishes once the sleeper turns over. And even the tubby stars in their bundles and swaddles of gas shake slightly when the sleeper turns over. Even the sneezes from the beds shake the jelly of the stars.

How slow the external autumns. The rot of the leaves smelling of melons and morning fireplaces.

The belts and bags we leave at the ends of beds find themselves again in boardrooms. Sleep is our most plastic exercise. We walk as if in a boat, dark is the plastic sea we sail on.

How good the tractor tires smell in the sunlight, dusted with the dusts of gravel.

And deep in the countries full of beds, how sweet the winters outside the beds. The warmth of beds loosens the stiff air above the states. It puts color in the spaces inside hay bales. We leave wallets and documents outside the bed, and we cease thinking of the innumerable people moving across daylit seas and down corridors of asphalt, we do not think of the young weaving through the hundreds of carnivals even this afternoon stitched across the globe, the people in their crowds experiencing Doppler-stretched musics, the billions of bangles on fat wrists and old ears, the bezels on the watches on the hirsute arms of the captains of deep-hulled ships, the bees in warm orchards smelling of oily machinery, all on the other side of the globe where summer has anchored herself, strange bicycles propped against the gravid trees, peach, apple, cherry, the buffalo grass hissing. Across the globe, far beyond the beds, as on narrow towers of shade, slim shadows lean down from the crossing planes and scour softly the fields. Such sentimentality. It will all end in bacteria.

Gabriel Gudding is the author of Literature for Nonhumans (Ahsahta, 2015), Rhode Island Notebook (Dalkey Archive Press, 2007) and A Defense of Poetry (Pitt, 2002). His essays and poems appear in such periodicals as Harper’s Magazine, The Nation, and Journal of the History of Ideas, in such anthologies as Great American Prose Poems, Best American Poetry, Best American Experimental Writing, and &Now: Best Innovative Writing. His translations from Spanish appear in anthologies such as The Oxford Book of Latin American Poetry, Poems for the Millennium, and The Whole Island: Six Decades of Cuban Poetry.