IN SEARCH OF DUENDE: SHADOWED! IS A 2018 AFTERIMAGE OF ELLEN ROTHENBERG’S 2015 EXHIBITION 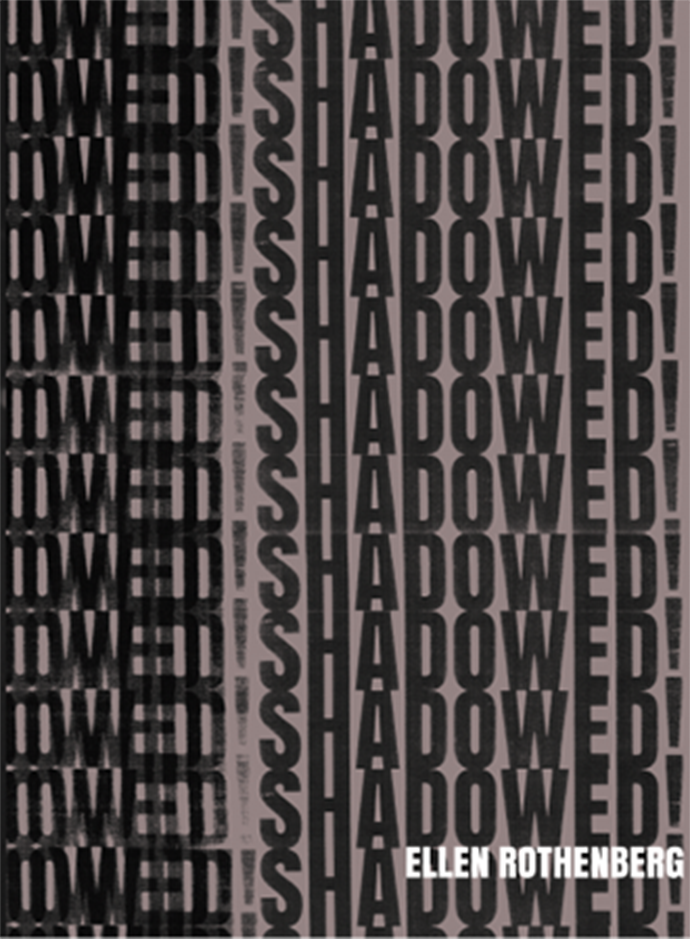 Caroline Picard founded and is now the Executive Director & Curator of Green Lantern Press, as well as a Co-Director of Sector 2337, the 501c3 arts organization that held elsetime and produced SHADOWED! I first met Caroline in 2009, and was struck by her palpable respect and commitment to the entire process surrounding a book’s invocation—from gestation to production to reproduction. Around that time Green Lantern was printing Mutation of Fortune by Erica Adams, a book that beat its beautiful wings against the slow, grey, passionless drudge of what was at that time my office life.

In his 1933 essay birthing this new use of the old word duende, which in Spanish means “mischievous spirit,” a contraction of the phrase dueño de casa or duen de casa, “possessor of a house,” for which English has no real equivalent, Lorca deemed duende the artist’s “ultimate secret, the subtle link that joins the five senses to what is core to the living flesh, the living cloud, the living ocean of love liberated from time.” How liberated is time in Rothenberg’s elsetime as it exists in SHADOWED!, from those two months in early Summer 2015 when the exhibition was “live”  in Chicago, a city where I once lived. Early summer there is finely fecund, almost lush–the cloak of Winter having finally dissipated, the city bearing in stunning force its six monthed-stricken elbows, ankles, and knees, beneficent contenders with the fact of light.

In reading SHADOWED! I bear this fact of Chicago 2015 here in my current home of 2018 Seattle, where bodies, more cloistered than Chicago’s, do not march out in droves to face the summer, because even in June here the sun still fleets.

“Central to Rothenberg’s artistic retcon is the image of her walking in the study of Bertolt Brecht,” Sector 2337 describes elsetime on their website. “How can plans for a future protest affect the furniture of the past?” This shaky sense of time is astringent in the exhibition, at its core, for tracing, as Jeffrey Skoller writes in his essay, “Unlived Histories and Life Longings,” from ACCOUNTS, one of the five sections comprising SHADOWED!: “a history of the artist–her past work, her aesthetic and cultural concerns.”

Concerns that Rothenberg, as an artist and a researcher steeped in the authenticity of a 20-year career, roots in the social and political actions of the sixties’ civil rights, anti-war, and feminist movements. Her work has been concerned with the “politics of everyday life and the formation of communities through collaborative practices,” including research with historians, forensic scientists, research librarians and archivists. Fittingly, Rothenberg often pushes her work outside of conventional venues.

“Rothenberg’s elsetime is a work of fragments: a sculptural montage of objects, photographs, texts, and allusions to history enigmatically encountered as a series of possible relationships between them. As one wanders through the gallery, relationships between images and objects are not immediately obvious,” writes Skoller.

Which makes me ask—isn’t SHADOWED! the book itself an object? The tome that has sat on the various tables of all the spaces I inhabit and have carried it—to the parking lot where I shared it with a student, the dining room tables of the houses I watch for extra money, the messy passenger seat of my car where my life gets tossed.

If I hold this book in my hands in 2018 Seattle, did the Chicago 2015 elsetime exhibition ever end?

I began SHADOWED! at the preface: “Borrowing its name from a pulp novel from Bertolt Brecht’s library, this book explores connections among Germany in the thirties and nineties, Woodstock in the sixties, and Chicago in the exhibition’s present, particularly as these threads have influenced Rothenberg’s creative life,” Picard writes. Picard goes on to describe the exhibition’s collected materials, starting with Hannah B. Higgins’s “study of a photograph depicting Bertolt Brecht’s well-worn armchair,” so when I turned the page and entered the elsetime section, I was surprised to see this: 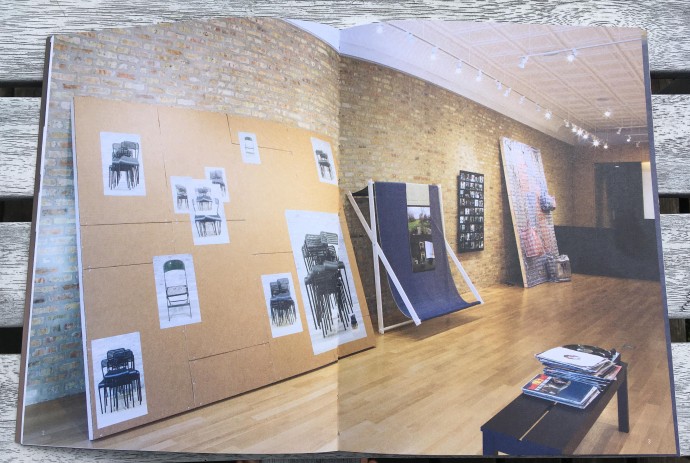 The photographs of the chairs, just above on the left, are not from early twentieth century anything, not from Brecht’s studio–they’re from IKEA, they stack awkwardly, they’re plastic, as described at other points in SHADOWED!

These were not Brecht’s armchair, and yet they were chairs. It felt like being in two places at once, encountering the idea of “chair” and wondering how my memory of Picard’s sentence bled in and forged my expectation for Brecht’s pastness, only to be usurped by the present.

But then there it is, on the next page, less focused than the IKEA chairs, layered over deep blue fabric, photographs from Brecht’s home, including the armchair, which is worn and repaired again and again, such a foil to the disposable IKEA’s, a chair that “Labor laid bare through the visible repair,” as Hannah B. Higgins describes in her essay “Epic Armchair.”

Like “duende” in Spanish, there is this German word, “Sehnsucht,” for which English has no equivalent. Jeffrey Skoller brings it up: “Although it’s related to nostalgia, Sehnsucht is not so much about the loss of something or an experience that once was had, but rather, the loss of something that was never had.”  It reminds me of what Picard writes in her essay, “Ghosts in Vernacular Space,” about Rothenberg including in her exhibit a 2015 photograph called “Shadowed!” “an adjacent image of twenty-six of [Bertolt] Brecht’s pulp novels, standing upright on one tight shelf, each well worn, as though having been read multiple times.” Picard continues to describe this photo as “a namesake of the book you now hold in your hands.” elsetime was the title of one of Brecht’s such tattered pulp novels. Fittingly, it’s elsewhere. Though the exhibition bears its name, Sehnsucht emerges in contending with a Brecht that read such. Though we do not see below the exact title that named the exhibition, one is forced to wonder what he was looking for in such pulpy pages, if he ever found it:

A series of public programs entitled “Not to be Taken,” is an additional element of elsetime, in which elected artists and thinkers publicly used the exhibition as a generative studio space. There, they engaged new questions about legacy and politics, place and time, through discrete actions; these subjective, ephemeral responses momentarily transform the exhibition with the performer’s unique potential.

There are many photos in this fourth section of SHADOWED!, showing artists manipulating the space of elsetime in their own ways–Dao Nguyen crawling under a fallen stack of those initial IKEA chairs that had at first thrown me so deeply off. Now, by page 156, they are in three dimensions. The effect is uncanny. Which chair is the “real”?

Encountering SHADOWED! for me was very much this feeling—of how to navigate, moment by moment, the real kernel of a passed thing. Take, for instance, one of the three geographical segments of the exhibitions—Woodstock Contact Sheet, from Michael Wadleigh’s 1970 documentary: 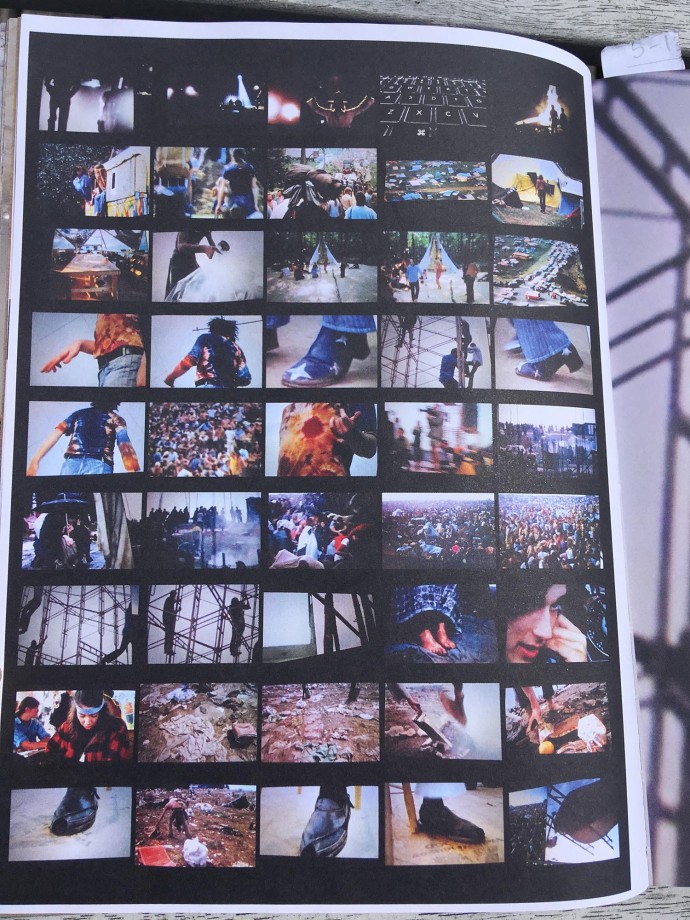 When does Woodstock actually occur? Only at the actual moment or does it still live in these documents? What does Woodstock even mean nearly 50 years later, in our now land of ubiquitous keyboards, a still at the top second-from-right, revealing the means of production that have allowed this Contact Sheet–not to mention elsetime–to be? Who is Janis Joplin anymore, anyway, after all of the regurgitated discourse surrounding her name?

I kept thinking in reading 2018’s SHADOWED! that the elsetime exhibition it examines took place in 2015, a full year before November 2016. Obama was still President. As it is remarked upon and examined, the show lives in new real time through the writers’ essays, and then in the photographs, particularly in this image from Alexandria Eregbu’s “Negotiating, Inserting, and Revising Past and Future Selves in the Present Now,” from the NOT TO BE TAKEN performance. Pinging back to a similar image in “Huddle,” from Simone Forti’s 1980 Handbook in Motion, are grouped 2015 bodies: 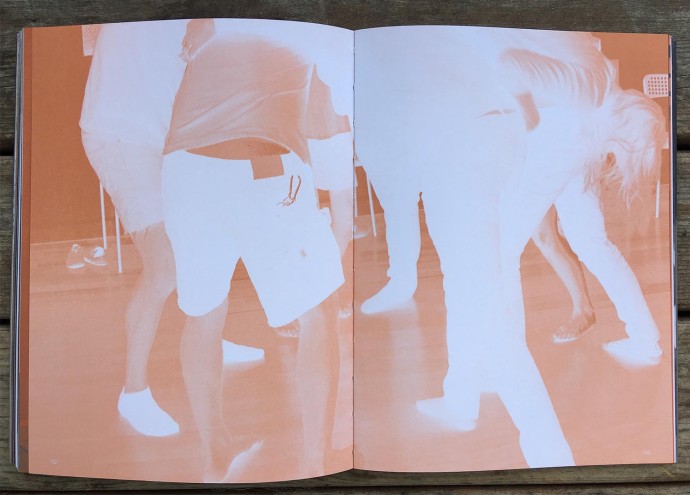 So perfectly reflecting the continuous present of this book—what it forces us to do to time, to see an exhibition three years after it happened, from multiple perspectives, a box within a box of documentary material as well as live essays created as a result of elsetime—SHADOWED! itself is a living thing in the way of these photographs.

Earlier, Skoller describes a segment of the exhibition as “remnants of twentieth-century radical cultural aspiration…the evidence tacked to a wall in a series of twelve transparent glassine envelopes each containing a photocopied book page”: 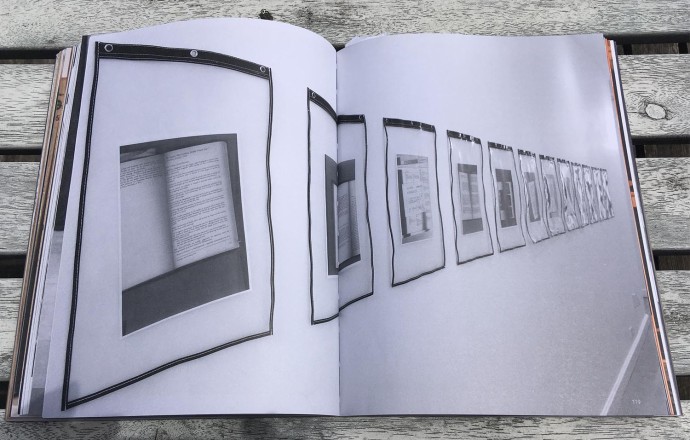 As Rothenberg is quoted as saying in the transcript of “A Public Conversation” between herself, Hannah B. Higgins, and Caroline Picard in May 2015, in the final section of SHADOWED!: “For me, as far as notions of melancholy and art exhibitions go, it’s when they’re up and complete. That moment of resolve is melancholy. I’m more interested in a social and discursive kind of situation and the possibility of other people’s interpretation, or reinterpretation, and…using the work as a springboard for producing new work.”

Lorca writes, “…at other times, when a poet or composer is no such thing, the performer’s duende, interestingly, creates a new wonder that has the appearance of, but is not, primitive form.”