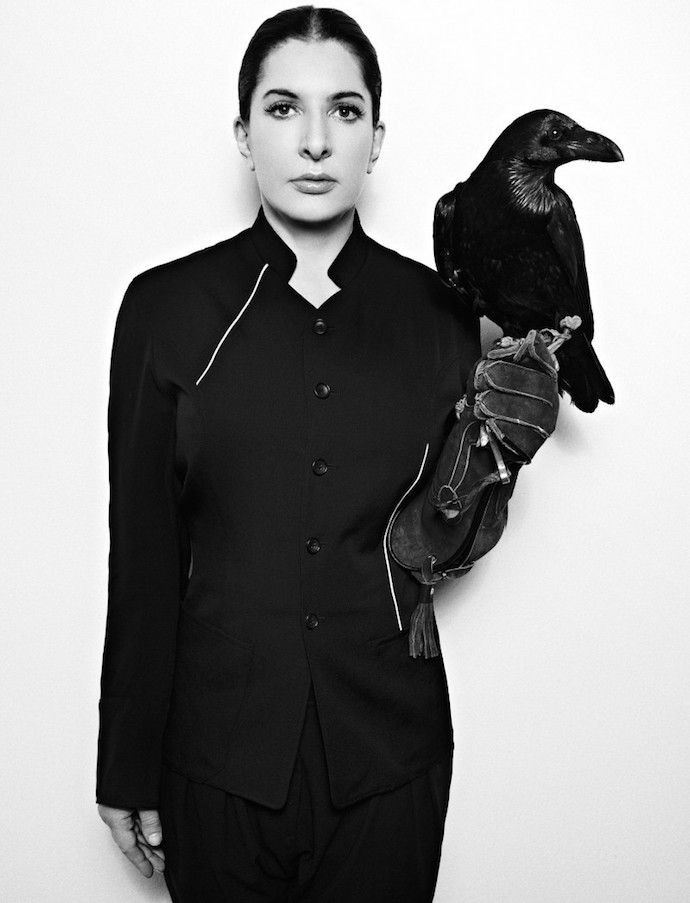 “Seeking the duende, there is neither map nor discipline. We only know it… makes Goya, master of the greys, silvers and pinks of the finest English art, paint with his knees and fists in terrible bitumen blacks, or strips Mossèn Cinto Verdaguer stark naked in the cold of the Pyrenees, or sends Jorge Manrique to wait for death in the wastes of Ocaña, or clothes Rimbaud’s delicate body in a saltimbanque’s costume, or gives the Comte de Lautréamont the eyes of a dead fish, at dawn, on the boulevard.” – Federico García Lorca, “Theory and Play of the Duende”

Seeking the duende, there is neither map nor discipline. We only know it makes Marina Abramović, world-renowned performance artist, take a blade to her stomach and tear into her fleshy abdomen the shape of a star, or forces Marina Abramović’s bare feet forward as she slams her naked body into a cement pillar for the 22nd time, or tugs on the folk songs that fall from Marina Abramović’s breath as she scrubs at bloody cow bones, or holds Marina Abramović lingering in the silent space between her and the person seated opposite for 736 hours: no breaks, no food, no urination.

I note the high, white, vaulted ceilings that spatially absorb the 900 Seattleites waiting in Seattle’s Town Hall to hear pioneer performance artist Marina Abramović give a book talk on her new memoir, Walk Through Walls. She enters: a long black line splices Seattle’s Town Hall. Stands on the edge of the stage. Receives applause.

We’re going to do an exercise. Unfold your legs; uncross your arms. Close your eyes.

Open your eyes. “Welcome to Present.”

We aren’t in the present, though. We are “above the precise present,” to cite Lorca. We are on the same plane where duende exists, and we feed off it through a woman who stole its “ultimate secret, the subtle link that joins the five senses to what is core to the living flesh, the living cloud, the living ocean of love liberated from time.”

All of our breathing rates in sync, in rapture as the 70-year-old Yugoslavian-born performance artist unravels life, recalibrates our senses, and summons the duende that lives inside of her.

Hosted by Seattle Arts & Lectures, the talk is mediated by the art critic for Seattle’s independent news source The Stranger, Jen Graves, who well understands that “You Do Not ‘Moderate’ Marina Abramović.” From the moment Abramović occupies the stage, the idea of a book talk is forever ruined for all attendees.

Abramović jokes, sitting in the chair beside Graves: “I’m not used to comfortable chairs.” We laugh as she recalls her 2010 MoMA performance piece, “The Artist is Present,” where she sat in a seemingly uncomfortable chair for seven to ten hours a day for three months, remaining present with whomever had the pleasure of sitting opposite her.

“With those two chairs you can move the world,” she remarks.

She plays here, as she did there, the “fatal character” sacrificing herself for duende inhabitation before it reverberates outward, making it, as Lorca explains, “easier to love, to understand, and be certain of being loved, and understood.”

As tears met the eyes of many visitors to the MoMA performance, I find my own developing as she performs herself, telling Yugoslavian jokes, laughing at her “bullshit Marina” persona, and disregarding Jen Graves’s questions in favor of direct audience participation.

Abramović speaks: “Music is the highest form of art because it’s immaterial; then, next is performance art.”

The ephemerality and immateriality of the evening lurk in the vaulted space, threaten the elevated precise present, and host duende, which by nature comes awake when time and element are allocated as such.

“All that is left is a memory,” she explains, and the moment echoes back.

She directs us to a new activity: How to deal with anger.

“There are two ways to deal with anger,” Abramović supplies. The first is to hold your breath, because when you finally breathe, you’ll be so happy you did you won’t be angry anymore. The second: Scream. As loud as you can.

Let’s try this one now. On Three:

Everyone screams. Some plug their ears, others let their ear drums hold the collective scream’s entirety. But we let it out – all of our angst, guilt, frustration, euphoria, lassitude, existence. It is our cry of duende. Our sincere, “deep, human, tender… real, poetic escape from this world.”

And it is eternal in feeling, but ends in real time.

Abramović plays two videos of her lesser-known performances. In one, she takes her bright red lips to an onion, tears her teeth into it, devours it, and curses the universe for all of her problems. In another, she sits with a donkey for hours and telepathically communicates to him her qualms about life. Abramović laughs at these clips, and we laugh along. But, they come from a dissatisfied, angry, and dark place within, and watching her tapping into these unaddressed areas before letting them air, releases ours, up into the vaulted ceiling, up away from our heavy masses.

She’s about to leave us. The talk is over. However, she has one more story. She says: a rock star performs every night. Puts out energy, gets an abundance of energy from the crowd, takes it in, puts it back out and gives more performance, soaks in more crowd energy, and eventually has to end, with so much still inside from the cheering recipients; and there is nothing to do but let it sit.

And then, at the end of it all, she says: “You are just you. Simple, vulnerable, and you know, alone.”

The mysterious force that everyone feels and no philosopher has explained rises to the surface, as we clap, pour, revel.

Just as it sits here now, as I type, alone, as you read, alone, as the duende undercuts our surfaces and seizes the air around us, We exist.