IN SEARCH OF DUENDE: FALLING THROUGH THE TRAPDOOR 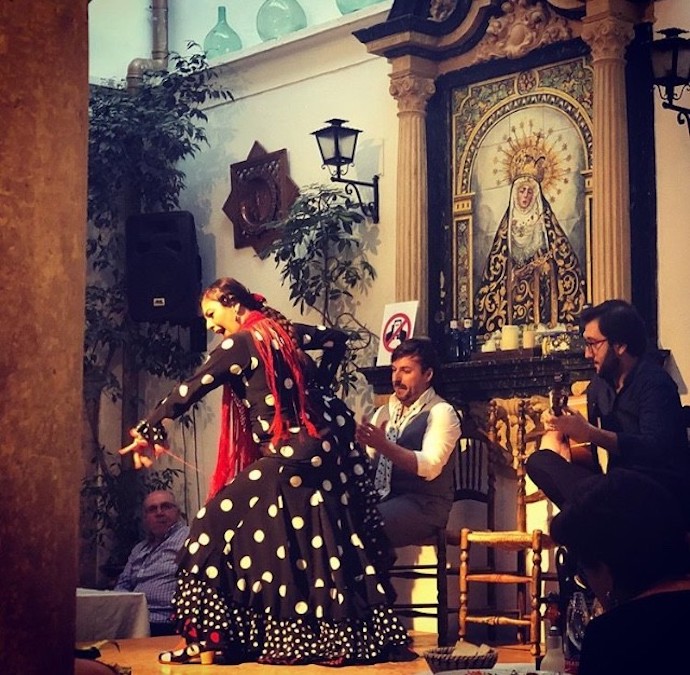 The stage is a small, raised wooden platform, heavily blistered in areas, symptom of a presence more than the beating of hard-heeled shoes upon it or the aching feet of those who’ve worn them. The venue is an intimate, incense-filled space that feels fresh, calm, unfussy. After we are seated, I immediately look up “El Duende” on my iPhone, the name of the little Flamenco bar we’ve found in southern Spain. My intuition tells me that Google Translate might be slightly miscalibrated when I’m presented with the words “The Goblin.”

“Duende” proves to be a challenging word to translate. It is one of those words for which even in its original tongue is shrouded in mystery. Painted on the wall adjacent to the stage is a list of 54 individual words, in Spanish, describing it. I recognize only a handful of them:

Spanish poet Federico García Lorca eloquently describes duende in his lecture Theory and Play Of The Duende: It is “a force not a labor, a struggle not a thought.” The struggle is real, people today might say. And while the struggle must have surely been real for Lorca, a man whom it is presumed was assassinated in 1936 for his homosexuality and socialist beliefs (his remains have never been found), I’m learning that this version of struggle, el duende, can’t be reduced to a hashtag, an academic formula, or most probably “a goblin.”

Lorca describes duende as something for which “there is neither map nor discipline.” We only know it rejects all the sweet geometry we understand, that it “shatters styles,” and is “truly alive.”

The performance hasn’t even started. I wonder if the stage is intentionally small. It contradicts the broad, sprawling stages of American high schools, Super Bowl halftime shows, TED Talks. Perhaps its meager size is due to the intrinsic compactness of so many things Andalucían. Little stone towns built on slight crowns and dramatic escarpments – to protect from ambush and floods. Webs of narrow cobblestone roads laid centuries before the invention of cars. Or maybe the modest size has more to do with the history of Flamenco itself.

Like duende, the history of Flamenco is subject to different interpretations. Even as certain styles matured in the dark taverns and modest households of Andalucía, other branches ripened within imprecise chambers of mountain caves, tight quarters of secreted hovels, rustic countryside patios – places where the various persecuted fled and took, together, what refuge was left for taking. There was little room, but this was all that was required for alchemy to happen. Finer stages could surely be built today, but a smaller one seems to hum in quiet reverence: We greet our struggles.

With the dimming of the lights and the entrance of the performers, the air within the room is expelled and replaced with a silent gasp, a shiver upon the skin. Clipped snapping of fingers and precise clapping of hands punctuate the air, conjuring the clomping of horse hooves. Life and death perk their ears.

Our poet’s description of duende as “the most ancient culture of immediate creation” begins to ring less esoteric.

The bailaora begins the dance; her emerald velvet dress the ruse – the Angel – Lorca might say, because of its beauty, its easy brilliance. The male dancer appears from the darkness, near her. They circle each other with birdlike lekking. The first cantaor unzips his skin, which falls to his feet. Out of his sinewy throat – or perhaps, from the earth – roars a bristly emotion, smelling of anguish and love and blood and tears.

The cantaor emanates nothing suave, only the protruding of veins on his neck and a purplish color now saturating his face. His calls erupt from the core, direct from a place Lorca calls “the edge.” It’s a place that modern culture typically steers us away from, a place of dark wind “blowing insistently over the heads of the dead.” And why would anyone seek out such a thing?

Because the struggle is real. Because pretending otherwise tends only to empower it. Glossed-over or boxed away, it will reemerge, devolved and deformed into the distant cousins Lorca describes as demons of “destructive and of lesser intelligence.”

In other words, worse mierda fills the niche.

But it is also beautiful in its own rite. It’s somewhat startling to see this kind of raw, emotional self-evisceration. I consider whether my reaction is the byproduct of an American upbringing. Does a culture that holds holy above all else the “pursuit of happiness” inadvertently encourage us to shove other critical feelings back into cobwebby broom closets, to bury them beneath towers of self-help books, selfie-sticks, glowing rectangular screens? Could this be why when happiness doesn’t work exactly the way we hoped, we instead often search for numbness?

The beauty is that emotional expression comes in many different flavors; the arts are a limitless gift. Here in my wobbly chair, I begin to just feel.

Lorca dismisses Angels (they don’t get their hands dirty) as much as he does Muses (they’re too lofty, full of false-securities), as well as demons and devils (they’re demons, devils), yet I wonder whether the Angel’s beauty and the Muse’s occasional glimpses of wisdom ever collaborate, to attract us, knowing full-well there’s a secret trapdoor of duende underfoot designed to pull us in – or rather out. Out of our violent rejection of feeling.

Although one thing about trapdoors is, as you’re falling you often feel lighter.

Ultimately, writes Lorca, “The duende loves the edge, the wound, and draws close to places where forms fuse in a yearning beyond visible expression.” Standing on the trapdoor is like standing on a precipice, the paper-thin edge between pleasure and pain, joy and sorrow, life and death. For now, we simply greet them all.

The stage erupts in a cacophony of earthly passion.

“Olé!” calls the woman sitting to my left.

“Olé!” I echo, surprising myself, because I rarely shout. I also rarely dance or sing. Mostly because I can’t keep rhythm or find a musical note if my index finger were glued to “Middle C.”

With imperfect sounds, things change. Here is a language I understand. Here is a musical note I can find – oxidized, atonal, exposed.

A perfect spray of sweat spirals outward from the male dancer’s brow like the arms of the Milky Way. The dancers revolve, stomp, and slap their thighs and chests, as if in self-flagellation. Now, the woman’s ferocious stomping has become hypnotic, autonomous, self-perpetuating. Her face, jutting suddenly right then straight again, is fierce and impermeable; her narrowed eyes and crimson lips are absent of affectation.

The guitarist has created his own weather system. Duende has arrived. Small beads of saltwater nest on the thin edges of my lower eyelids, wanting to spill over, yet not wanting to leave their delicate perches.

The man across the table, who I don’t know, places his hand gently on my arm. I look at him. He glints, grandfatherly. Later during the intermission we will meet him. We’ll learn that the man is an old Flamenco maestro. But I don’t know this just yet. I pull a word from my inadequate catalog of patchwork Spanish: “Lloro,” I say to him. I cry.

The old flamenco maestro pats my forearm gently, then returns to his Cava. We fall back into the swirling wildfire on the little platform before us.