I’ll Be Your Mirror: A Conversation with Eric Oglander 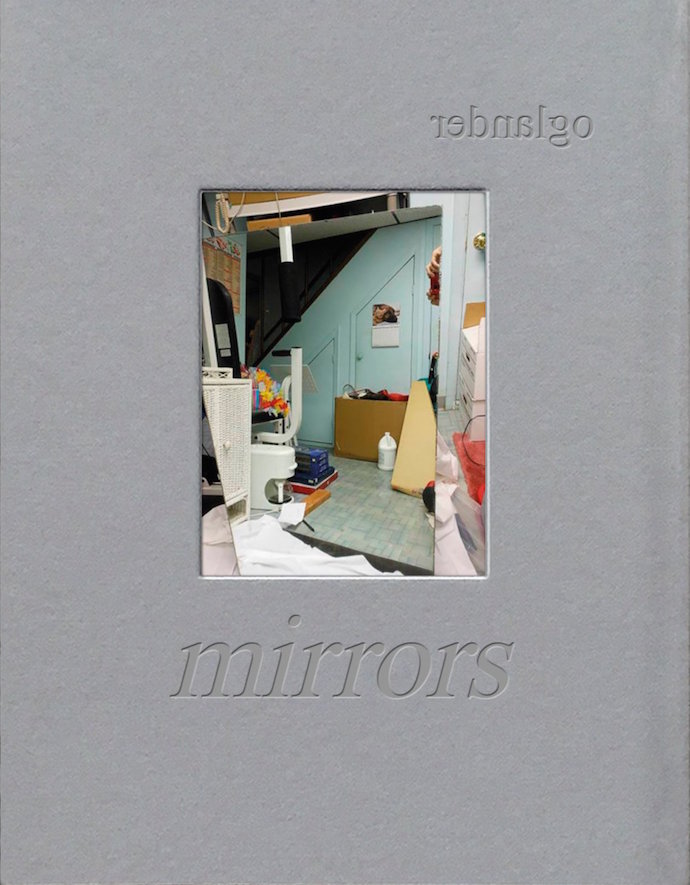 I’ll be your mirror, Reflect what you are, in case you don’t know
– Lou Reed

“I search craigslist for photos of mirrors for sale and post them.” That’s the first thing I saw when I stumbled on Eric Oglander‘s Instagram. I spent the next hour scrolling through the For Sale ads he had stumbled across, amazed at the mix of accidental beauty and weirdness of things caught in the reflection. I quickly realized something obvious I’d never considered before — you can’t capture a mirror without it capturing what is reflected behind. With the ever growing followers on Instagram and his Tumblr, Eric’s collection of mirrors has turned into a coffee table book, out now from TBW Books.

I caught up with Eric to discuss how all this came about. – STH

How did this all start. Was it as simple as looking for a secondhand mirror on Craigslist?

When I was 18, I started buying and re-selling bikes that I found on Craigslist. This gradually evolved into buying all sorts of things that I could flip to make money: antiques of all kinds, vintage audio equipment, cameras etc. I made my living this way for some time while living in California. I also searched at flea markets, and garage and estate sales. I think I was looking for garage sales on Craigslist when a mirror first caught my eye. I had been collecting other compelling imagery before I fell into mirrors. The mirror was a convex security mirror with the protective film still covering it from the factory. Two ghostly figures were being reflected. It was leaned against a shed and reflecting another shed or house.

Anyway, I became a bit obsessed. Upon moving to NYC and visiting Printed Matter, I had the idea to turn these images into a photo book. I couldn’t afford it and started the Tumblr instead and eventually the Instagram. 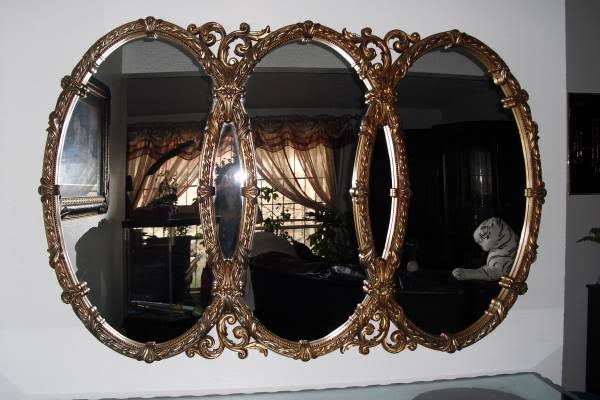 Was there a specific moment you remember when you saw something in a reflection and it sparked something in you?

I often like when “nothing” is being reflected–at least nothing that interesting. A mirror in a bleak room reflecting the color of the painted wall or the perfectly made bed is super sad. It gives the mirror a strong presence rather than what’s being reflected. Of course I also dig weird, wild, juxtaposing reflections. There was one mirror I found that was reflecting a guy’s legs in hospital scrubs. He was backlit and you could see his rather large penis very clearly. I’m sure he was well aware and proud of this. 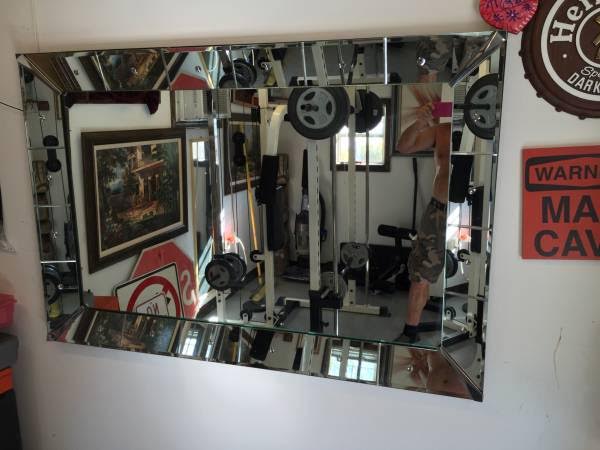 Constantly. It’s endless. I search all over the country in every city available on Craigslist. There is always new material. 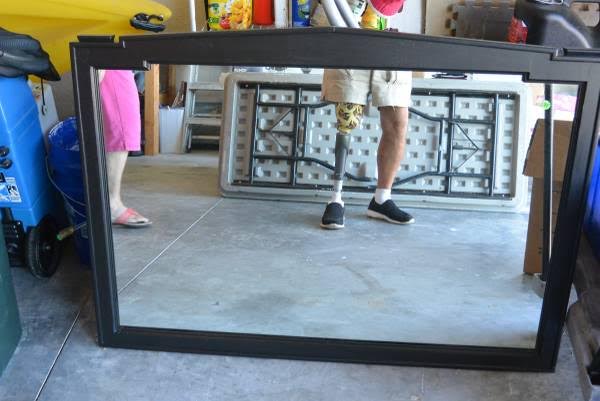 How often do you check Craigslist?

I check Craigslist multiple times a day whether I’m looking for mirrors or for bicycles for myself or to re-sell (I still buy and re-sell stuff). I also frequent the free section as I’ve scored stuff there. Lately I’ve been looking at the pet section to see what snakes people are selling or giving away. I’m really interested in snakes, but that’s another story.

How long has this archive been going for?

The Tumblr archive goes back to October 2013 so that’s pretty accurate. I was collecting them before then but October is when I started hitting it hard. 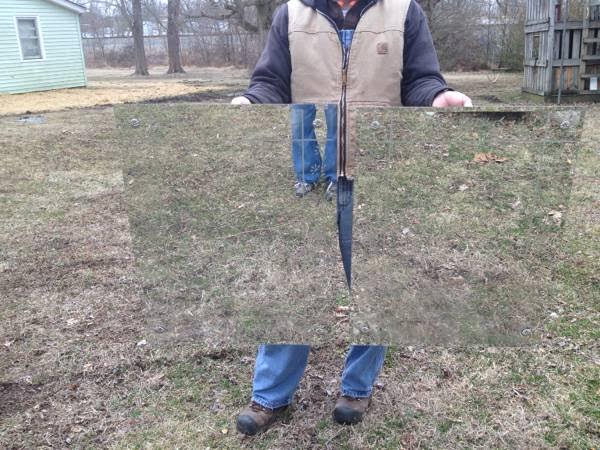 Would you say this become an obsession for you?

The word obsession carries a lot of negative connotations, but I don’t venture too far from carrying that descriptor. I’m interested in a lot of different things and they come over me in waves of fairly intense periods of obsessive behaviour. I’ll spend an irrational amount of time researching and looking at photos of whatever it might be. The mirror project started that way. I had just moved to NYC and didn’t have a job for a while and not a consistent job for over a year. I spent literally days doing little else but searching for mirrors. I was excited about it, and I was excited that other people were excited about it. 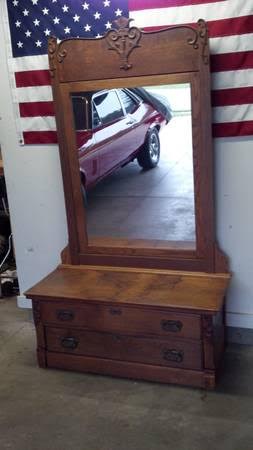 You said, “You’re not interested in the mirror itself ;its what’s reflected”

Well, I suppose I’m interested in both. It depends on the photo. Some photos are about what’s being reflected. Others are about the mirror. 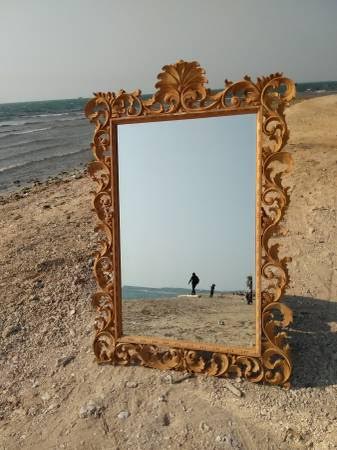 It’s odd that we are living pretty much in age of transparency where everything is on display or posted but somehow these photos seem deeply personal and almost invasive.

People post selfies or photos of their lunch all day long. The unintentional nature of images from Craigslist definitely gives them a voyeuristic quality. They’re well aware that these photos will be available to the public, but they don’t know that some guy is going to share them with thousands of people on Instagram and Tumblr. 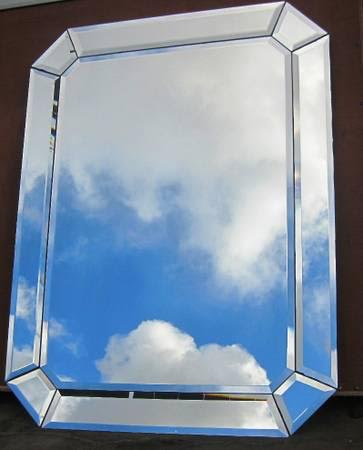 The one where a woman had thrown a white sheet over her body to photograph the mirror, she’s joking it’s a ghost in the listing’s description, but I can’t tell if she’s genuinely uncomfortable with being in the photo.

That listing didn’t have any jokey commentary. She only provided necessary information. I don’t think there was even a complete sentence. Only what was being sold and for how much. I’m consistently surprised that people aren’t taking note of what they’ve captured whether purposeful or not. 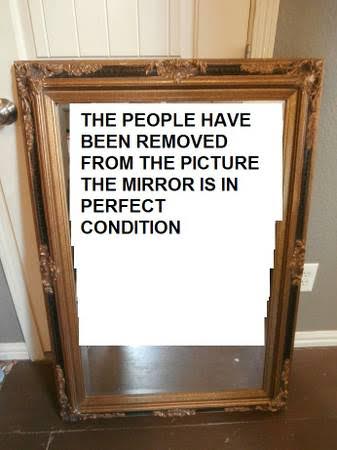 I’ve seen multiple people tape paper towels over mirrors. One person taped multiple 8.5″x11″ sheets of paper over a rather large mirror. The photos are also often pulled into photo editing programs where the reflection is blurred or obscured in some way–often making for an great photo.

I know you like collecting. I was wondering have you ever had the urge to go buy one of these mirrors just to meet the person selling it or to look around their home

I’ve seen a handful of mirrors that I like. Really old, hand carved mirrors strike my fancy. Anything unique, old, hand crafted and wood is appealing to me though. Most of the mirrors I find are not local so shipping would be a pain in the ass, and the seller likely wouldn’t be willing to work that hard. I buy a lot of stuff from Craigslist and from garage and estate sales. Meeting the people, getting a piece of their story, and seeing the inside of their home is always fascinating. I love that aspect of Craigslist. With the mirror project, I’m often able to see inside their home already (laughs).

Camera phones pretty much gave birth to the selfie and for the subject to create and manipulate their own image, but something about these mirrors almost renders that impossible.

I can’t think of anything more challenging than a mirror to photograph that’s also manageable in size. On top of reflecting the photographer and the surrounding objects/room, they also bounce light everywhere. Watching people try to tackle photographing a mirror with a flash is wonderful. The mirror will often take it and imprint its shape on the opposing wall. They also create these amazing patterns within the mirror itself. 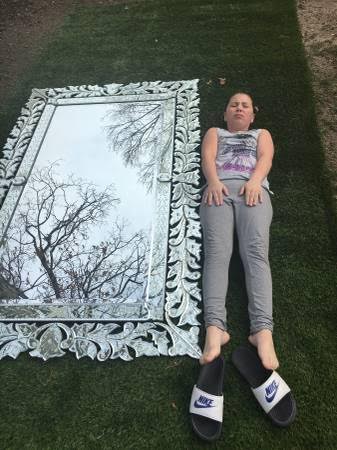 Do you see yourself stopping now a book has been published?
I consider it sometimes, but I’m really bad at stopping things that I enjoy doing, especially since I’m already going to be on Craigslist and looking at virtual garage sales. I’m going to find mirrors whether I try to find them or not, and I’m going to want to share them. But I’ve slowed down a bit since I started. I’ll often go a couple weeks without posting anything, so it’s never a burden. People also seem to really enjoy it, and I love providing people with something that’s surprising, positive, creative, often aesthetically pleasing, and perhaps inspiring. It’s also a way to zap time on the Internet without feeling guilty about it.