In the 1960s, Japan’s underground arts scene was one of the most potent of the 20th Century. Photography, performance, film, music, theater, and graphic design all thrived – matching the era’s radical politics with equally radical aesthetics. Manga also played a part in this angura arts revolution, but none of that work ever reached Western audiences.

Three years ago, PictureBox Books launched the “Masters of Alternative Manga” series, edited and translated by scholar Ryan Holmberg. The goal: To showcase the most exciting creations from this fertile period. However, the publisher went out of business shortly after releasing their first volume, Seiichi Hayashi’s gorgeous and strange collection Gold Pollen and Other Stories. Thankfully, Breakdown Press (UK) has picked up the series and upheld its high production values, releasing three handsome collections so far. The collections are mainly drawn from the pages of Garo, Japan’s legendary avant garde comics magazine.

Red Red Rock and Other Stories

Seiichi Hayashi’s Red Red Rock and Other Stories is a companion volume to Gold Pollen, collecting over 200 pages of eye-popping work alongside a lengthy illustrated essay by Holmberg that supplies context for these wonderfully bizarre concoctions. Hayashi’s shape-shifting stories veer between searing political satire, whimsical adventure, cultural critique, and sexual taboo–from story-to-story, page-to-page, and even panel-to-panel. 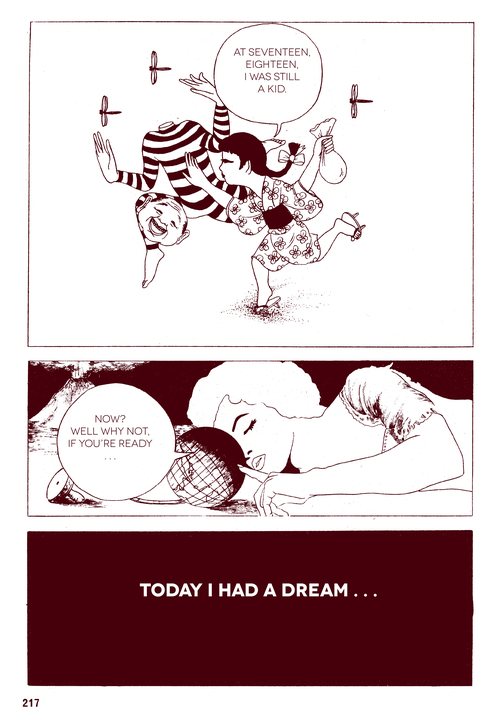 In contrast, Hayashi’s Flowering Harbor is a slim standalone volume that maintains a single delicate mood. Recounting the rain-drenched tale of a lonely bar hostess, it’s Hayashi’s attempt to translate enka, a popular style of depressive pop ballad, into comic book form. The book is best appreciated as a musical mood piece rather than a psychological story, its detailed lines inspired by traditional Japanese illustrations.

Sasaki Maki’s Ding Dong Circus and Other Stories comes with a glowing introduction by Haruki Murakami, who hired Maki to create the cover for his first novel.

Even more than his colleague Hayashi, Maki’s work is a collision of styles and sensibilities, channeling psychedelia, collage, and photography, alongside rock & roll, British humor, and the Vietnam war. Dispensing with psychology, these stories are closer to surrealist poems. They’re propelled by their own internal logic but never lapse into narrative.

Printed in purple ink, countless pages of Ding Dong Circus are worthy of inclusion in the recent traveling “International Pop” art exhibit. Fifty years on, this dazzling work remains utterly singular, created in a language that nobody else has learned to speak. 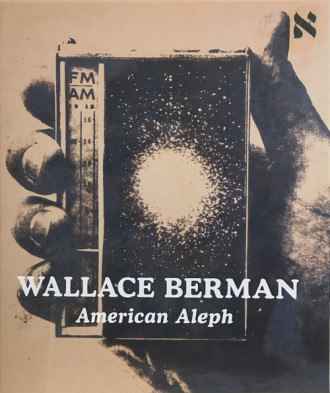 Though he’s hardly a household name, Wallace Berman’s work casts a long shadow. He helped create the vibrant West Coast art scene of the 1960s, and was one of the luminaries featured on the cover of The Beatles’ Sgt. Pepper’s Lonely Hearts Club Band. He’s been called a Beat artist and proto-Pop artist, but curator Johan Kugelberg more accurately describes him as “proto-punk, proto-DIY, and proto-appropriation art, and also post-Dada and post-Symbolist, and this and that, and whatever you want him to be.”

Berman’s multifaceted work refuses to fall into neat categories, which is why it’s remained a vital source of inspiration in the decades since his untimely death in 1976. He’s a major figure in American art whose true significance has yet to be fully realized.

The Kohn Gallery in Los Angeles recently mounted a Berman retrospective and their beautifully designed catalog serves as an excellent introduction to his work. It captures the full breadth of his output, including sculptures, collages, photographs, drawings, posters, film stills, mail art, and even images of pieces that are no longer extant.

There’s also a nod to his assemblage and literary magazine Semina, which lasted from 1955-64 and featured work from writers including Jean Cocteau, Herman Hesse, Robert Duncan, and John Wieners. For a deeper dive into this influential project, check out the recently reissued Semina Culture: Wallace Berman and his Circle.

American Aleph discusses Berman’s far-flung influences and the paths his work followed after an early gallery show was busted on obscenity charges. The catalog is most notable for the generous selection of Verifax collages he focused on during his final decade. These works feature a hand holding a transistor radio whose visual content continually changes: religious icons, politicians, pop stars, nudes, flowers, buildings, animals, and much more. They’re accompanied by Hebrew letters, deployed in ways that suggest mystical Kabbalistic associations.

This onslaught of images feels remarkably contemporary, leaving viewers to discern their own patterns and meanings. They’re mysteries whose depths remain unplumbed, transmissions vibrating on their own disruptive frequency. 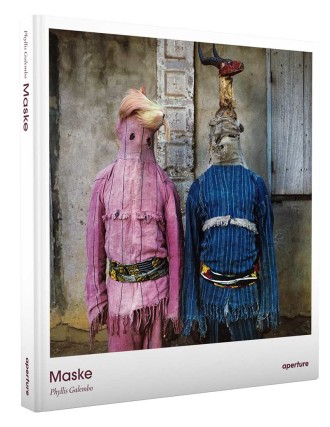 Shaggy outfits woven from grass and leaves. Faces obscured behind clouds of cotton. Ghost and bull masks constructed from painted cardboard. Doll faces attached atop heads that are hidden behind brightly patterned fabric. These are some of the least startling images from Phyllis Galembo’s book Maske, which focuses on the masquerade tradition in Africa and the African diaspora. Her photographs document cultural traditions which range from religious ceremonies and rituals to contemporary carnivals and fancy dress balls.

Shot over the past 15 years, these images show how the masquerade tradition continues to evolve, incorporating materials at hand such as printed fabrics, synthetic fibers, vibrant patterns and color palettes, plastics, and cardboard. Both Galmebo and historian Chika Okeke-Agula provide background on the various traditions, but the vast majority of the book is given over the splendor and inventiveness of the portraits, allowing these powerful images to witness as directly as possible. The exquisite printing by Aperture ensures the costumes stand out in all their vibrancy and detail.

Some of these costumes are designed to be festive and humorous, while others are intentionally fearsome and menacing. For those used in religious rituals, the mask often evokes a particular spirit who possesses the wearer and consumes their identity. Regardless of their use, all of these masks evoke mythic characters and tap into the desire for transformation.

What’s most remarkable in Galembo’s portraits is how she captures the elemental power of the mask to momentarily shift the reality of both the wearer and the viewer.