Ideal home noise: Fiction, photography, comics, film, and music that’s worth taking up space in your head. Welcome to the first installment of a regular column surveying the landscape by Jeff Jackson. 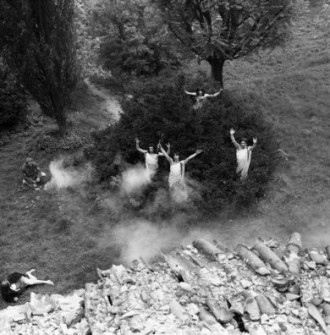 DANCING ON THE DOUBLE ICE
By Jan Sagl
(Kant Publishing)

This book of counterculture photos from the Soviet Bloc days of the Czech Republic offers a startling glimpse into a previously hidden world. Dancing on the Double Ice follows the thriving art community of the mid-1960s as it’s forced underground during the totalitarian crackdown of the following decade. There’s Dadaist gallery shows involving hay bales, sprawling land art happenings, surreal bird-themed music festivals, condom parties, and much more.

Many photographs revolve around the art rock band The Plastic People of the Universe, who released important samizdat records like Egon Bandy’s Lonely Hearts Club Banned which were secretly circulated among fans. There are compelling shots of Plastic People concerts, often illegal gatherings that helped keep the flame of artistic resistance alive. Rather than engage in overt political actions, photographer Jan Sagl and his cohorts attempted to create a radical zone of freedom that existed outside the repressive establishment.

Sagl’s black-and-white photos aren’t always immaculate art objects in themselves, but each one evokes a palpable sense of play, place, and intimacy. These vivid portraits showcase a subterranean scene with no access to drugs, where Velvet Underground albums were revolutionary totems, and weddings also served as camouflage for concerts. Over the course of this handsome 600-page tome, the same faces reappear in different contexts, adding poignancy to the project.

Amazingly, these images were just recently recovered. They were believed lost, forever sealed under someone’s floorboards to keep them out of police hands. The double ice of the book’s title refers to a lake thawing and then freezing for a second time and people mistakenly believing it will hold their weight. In the introduction, Sagl writes of the government: “They got every last one of us. They destroyed our lives. There is not the slightest doubt about that.” He would know, but these vibrant and defiant photos stand as testament to another truth. 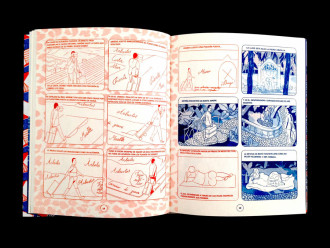 Olivier Schrauwen’s graphic novel presents itself as yet another biographical story, detailing the life of his grandfather. It begins as the naïve young Arsene departs his home in Belgium, boards a freighter, and sails for the sweltering beaches of an unnamed colony. At first, events are recounted in such a matter-of-fact manner that they almost seem too simple. The artwork is also plain, comprised of illustrations rendered exclusively in red or blue ink. The strikingly limited color palette may initially seem gimmicky, but the constantly shifting hues prove perfectly in step with the narrative’s increasingly off-kilter rhythms.

It takes several chapters to realize Schrauwen’s simple style is mostly a smokescreen. The story of Arsene’s life in the colony becomes increasingly surreal in such small degrees so that you barely notice you’ve slipped into world full of roving ostriches and immense theme parks that bear a striking resemblance to Raymond Roussel’s Locus Solus and Impressions of Africa. The book’s exquisite geometric patterns and unexpected backgrounds assert themselves more forcefully. By the time you reach the hyper-sexed leopard men, you’re forced to reconsider your approach to Schrauwen’s canny project, which masterfully slips between recognizable emotions and genres.

Best known as creator of the New Novel and screenwriter for the classic Last Year in Marienbad, Alain Robbe-Grillet also had a long career as a film director. For anyone who’s bought the lazy critical line that his work is dull and humorless, this set should be a revelation. His films are a brash mash-up of genres, including horror, mystery, war movies, spy thrillers, and exploitation flicks. Robbe-Grillet creates compelling puzzle films from these shopworn materials, playful narratives about the pleasures of imagination and the limits of voyeurism. They’re structurally dazzling, without stinting on entertainment.

This beautiful box collects his first six films, rarely seen in the U.S., which constitute his richest work. Eden and After (1970) chronicles a young woman’s journey through the mazes of Morocco and Mondrian, exploring the liberation fantasies of the era’s youth culture. It’s also one of the most ravishing color films ever lensed. Both Trans-Europ-Express (1967) and The Man Who Lies (1968), which feature Jean-Louis Trintignant, are filled with slapstick gags even as they plumb the nature of storytelling and the purposefully faulty memory of post-war Europe. Successive Slidings of Pleasure (1974), Robbe-Grillet’s most explicitly erotic film, turns the history of witchcraft and female repression inside-out. Set in starkly minimalist prisons, dungeons, and court rooms, it unravels the punishment narratives we concoct about ourselves and others. Of all these films, Only N. Took the Dice (1971), a television remix of Eden, falls short of being enthralling.

Presented in pristine transfers, the films are accompanied by warm and engaging interviews with Alain Robbe-Grillet. Although they’re available domestically, this imported set from the British Film Institute is worth seeking out specifically for the illuminating commentaries by Video Watchdog editor Tim Lucas. He discusses the films in the context of both world cinema and Robbe-Grillet’s fiction, elucidating overlooked feminist subtexts and offering fascinating insights into the director’s creative process. He gives these works the serious attention that’s been long overdue.

Seen together, Robbe-Grillet’s films forge a fresh territory between genre and art. They’re movies that demand viewer participation to navigate their labyrinths, but in the end they deliver new forms of pleasure. 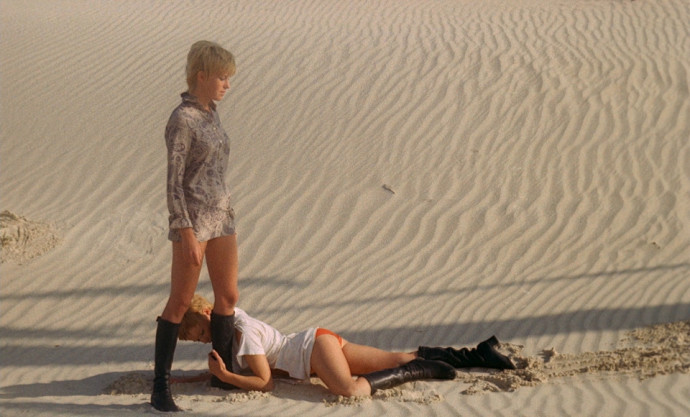