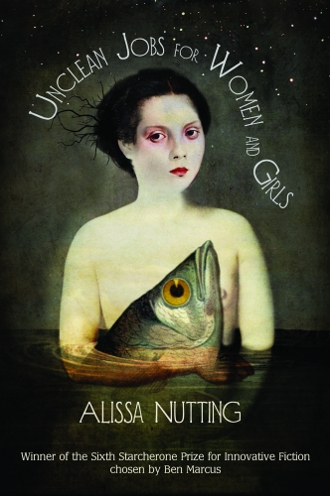 I work at a small business that makes ice sculptures for gay pool parties. I answered the job ad because I’m diabetic and they offered health insurance. When I showed up for the interview, they were thrilled.

“You’re perfection!” exclaimed my bosses, a male couple who were looking for someone who would not easily distract or be distracted. “Not only are you a woman, but you are also a very plain one.”

At the end of each party, I have the saddest job: to melt down the ice creation into nothingness. This makes the hose in my hand somehow feel like a gun. I try to at least be humane about it. If the sculpture is an animal, say a dolphin, I always do the head first. That way it will no longer be able to feel anything and the rest of its death can be painless.

One night the ice sculpture for the party was a giant hypodermic needle. It was some LA heroin-chic thing, but being diabetic and humorless, I didn’t think it was funny.

“You know,” I said in a heavy tone to my bosses, “some people have to use needles every day.”

“Honey,” they chided, “we’re not catering a rehab graduation. It’s a joke.” I told them I wasn’t laughing and they gave me this look that said they felt sorry for me, the same one they’d given me when I asked if they liked my new outfit.

That night, as the partygoers passed the sculpture pointing and laughing, I stood next to it with my chisel and politely scowled. Whenever someone asked for a piece, I gave him one that was far too big, overfilling the cup and spilling the drink.

“There’s more where that came from,” I’d mention.

Later, when one of the waiters offered me a glass of champagne on a tray, I took it.

“Look who’s letting loose,” one of my bosses teased, passing me. He was naked except for a strategic piece of animal print silk.

I decided to have another glass. Eventually, a man came up and asked why I looked so glum. I never drink, being as alcohol turns straight into sugar, so I was feeling a deep, meaty warmth that I’m not used to, especially not when standing next to a block of ice.

“I have to inject myself with insulin every day.” I was speaking in a volume and tone not socially appropriate for the hired help. “I don’t think this symbol should be used as a novelty.”

The man took a slow sip of his drink. The drink was probably warm, seeing as he’d walked over to me to get ice. His movements were universally calm; even his blinks seemed to take longer than they should.

“That’s the thing about symbols,” he said, “they mean different things to different people.”

I chopped off a large piece of needle and plunked it into the man’s cup. He did not say thanks, but “Huh.”

I began to look him over. I was suddenly very lonely, and hoped that this man, who had now been standing with me longer than any guest at any party ever had, maybe wasn’t gay. I think the man somehow picked up on it, my sudden ache for physical affection.

“I think it would be therapeutic,” he said, “if you gave the needle a big hug and a kiss. You clearly have some resentment towards needles, and resentment is just not healthy.”  He took another one of the slowest sips in the world, even slower now that he had such a large piece of ice in his cup.

Had I drank four glasses of champagne?  Five?

I wrapped my arms around it. I’ve never had a lover, so it was an awkward embrace. The sculpture felt slimy but cleansing, like my wrists were being covered in very cold perfume. I puckered up my lips and closed my eyes, but before I started to move in the man stopped me. His face had slowly gotten very close to mine.

“You’ve got to give it a real kiss,” he said. “The kind that make people forgive things.”  Then, slowly, he kissed me. It started with his tongue poking soft and flat into my mouth. Both our lips were warm and burning with alcohol. When it was over, I gave him that look that asks for more, but he pointed me towards the ice needle. “I am gay,” he said, also slowly, as though I’d had more than enough time to figure it out.

I stuck out my tongue that still tasted of his booze, which was a more grown-up booze than I had been drinking, and pushed it right against the needle at its very base. I channeled warm and loving thoughts. For a moment I felt at peace.

Then I realized I was stuck.

The slow man broke his trademark and quickly left. I stood there for awhile, watching the guests stare at me, laugh, and then take the pick from my arm, which was still wrapped around the needle, and help themselves to some less-gigantic pieces of ice. Since I was attached to the sculpture, when they chiseled it I felt like they were breaking off a piece of me too, and I protested in grunts and wrapped it more tightly around myself. The chiseling made everything vibrate in a threatening way. I wanted it to stop.

I grunted louder and mounted the sculpture fully, like it was a tree and I a koala. I was wearing a thin dress and the ice numbed my skin.

Finally my bosses approached. They’d never touched me before, but somehow their hands felt familiar. They chiseled off the piece of ice around my tongue and then told me go to a sink and hold it under warm water. “You’re not the first person this has happened to,” they kept saying, but they weren’t reassuring about it.

As we walked towards the bathroom, I looked back at the needle. All the places where I’d been pressed against it had melted smooth; its calibrated numbers had disappeared, and the handle now curved inward in places.

As the hot water began to flow, I couldn’t help but notice my bosses looked sad, a bit like me when I have to kill the ice sculptures.

“We thought you would work out so nicely,” they lamented. The stream of faucet water was big and roaring in my ear. The water was so hot that I imagined I was traveling into a volcano, that my tongue was made of lava, and my hair. I let the water run all over my head and neck, staying under the stream as I heard my ex-bosses leave the bathroom.

Beneath the faucet, I pictured myself in another, similar universe on a night much like tonight, finishing out the party then hosing the sculpture down needle-first. As my drunken warmth returned I stayed with the small relief of that image, the still absence that comes when the head melts clean of its body.

More Fiction from The Fanzine:

“It Hatched and It Died” by Matt Jent