I Just Try To Be Honest and It Turns Out Funny: An Interview with Timothy Willis Sanders 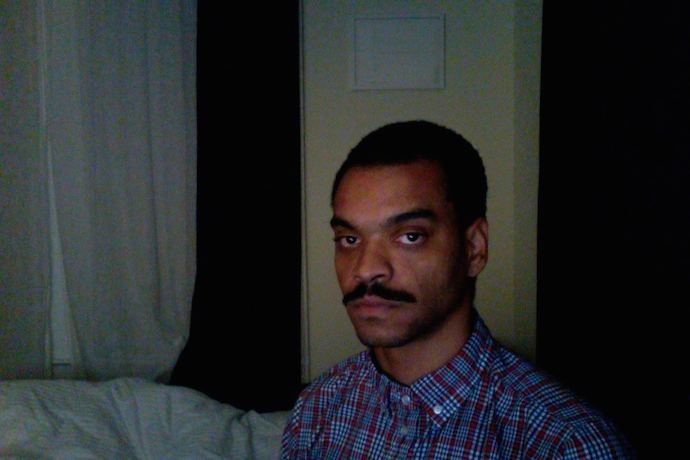 Timothy Willis Sanders came onto my radar a few years ago, when I first noticed his humorous short stories. Some of his stories, such as “you have a crush on kells,” fascinated me with an otherworldly, absurd approach to reality, while some of his other stories left me unimpressed and unsure whether his hyperminimalist style was sort of a dead end. Regardless, I was interested in his approach to fiction.

When Civil Coping Mechanisms, the press that published my first book, picked up Sanders’s new novel, I made sure I could get my hands on an early copy. While the stories from his first collection had left me with a mixture of “oh wow” and “bleh,” this new novel engaged me more than almost any other piece of contemporary literature.

Set in the early 2000s in Texas, the book focuses on the relationship of the main character, Matt, and his girlfriend, Vik. Smothered in the widespread political paranoia of the Bush era, the novel feels strikingly original in its approach to describing a romance.

Matt always seems to be going nowhere, doing the same things, so on. But it’s also easy to forget that this is a character that is fighting for his life. He is just trying to survive. At the time, in the early Bush years, it felt like it was very possible that the world could explode in complete chaos at any moment, and Sanders is able to portray that beautifully throughout the book.

His greatest asset is his humor, and it’s a deft, powerful humor. It’s a humor that is very matter-of-fact and fluid; strung between pockets of mundanely descriptive prose or absurd dialogue scenes, we get these thought bubbles from one of the funniest narrators I have ever read. As the struggle to see a possibility for tomorrow becomes bleaker and bleaker, this narrator makes sure that a healthy dose of humor is always in storage to keep you turning the page, always wondering just how bleak and funny it can get.

After reading, I had some questions I wanted to ask Timothy, so I asked them. He responded, and the following interview is the result of our conversation.

You have a very distinct style of prose. How did you develop this style? Do you write in other styles?

I have work that uses a wider spectrum of language. However, if the story is based on actual events, I find the only way I can detach from my perception of the events, and convey something honest, is to leave out commentary and exposition, and try to sustain my focus on thoughts and actions.

Can you maybe link or reference something that a wider spectrum of language, or do you not publish it?

I don’t generally publish stuff like that online, as it’s much better reading on paper than on screen. I think the piece I did for Logue [a magazine edited by David Fishkind] is a little more expansive that what you would find in the novel or Orange Juice. 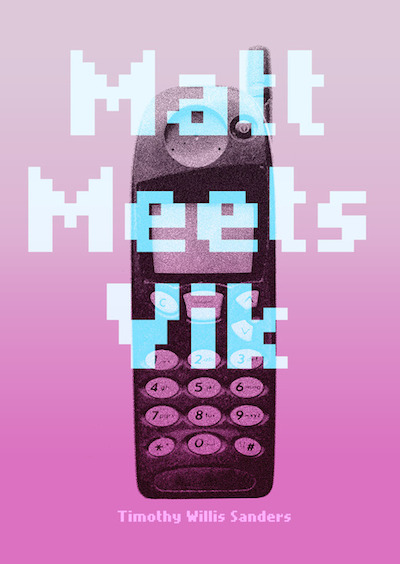 The main character in Matt Meets Vik has a ton of funny thoughts. Do you try to keep more funny stuff and cut other stuff, or is that just kind of how it ends up?

That’s just kind of how it ends up. I don’t try to be funny, I just try to be honest and it turns out funny. I like to think about all the petty, vulgar, or dumb thoughts people have during a day. I feel like an hour of listening to the thoughts of someone alone in a bathroom will tell you more about a person than a 10,000 page biography.

I usually blow up the font size to about 18-22pt, turn the text red, read it aloud, then delete anything that embarasses me.

I can’t sleep past 8:30 am, so usually in the morning, in my little office. Just an hour or so a day, no marathons. I don’t show my writing to anyone unless I feel it’s finished. When I was on the 20th draft of Matt Meets Vik, I panicked and sent it out 3-4 people. I felt embarrassed afterward. I couldn’t accept that something I’d worked so hard on was incomplete. I wanted someone else to tell me. My goal now is to work on something  until I don’t care what anyone thinks of it.

Do you generally want people to read your work, once it is complete in some way?

Why or why not?

I’m not sure. I want readers to laugh or feel the same things I do.

The book is set in the early 2000s. The main character, Matt, has a great deal of politically-related anxiety and even paranoia. How was the Bush era different for you than the Clinton era? I know for me it was sort of a political awakening. What about you?

When you live in the south, George W. Bush is your Dad’s best friend, he’s your mom’s real estate agent. You just see George W. Bush-type of people everywhere in the south. I knew who George W. Bush was before he ran and felt terrified he could ever be president. I followed in the 2000 election closely. After he was put into office, I followed his presidency closely. There was a constant sense that the world is going to end because the president has no idea what he’s doing. Obama has his own set of problems, but at least you feel he’s not going to do anything too crazy, like invade a country.

What exactly is this “George W. Bush-type” person you describe? Why is it terrifying?

I’d say a charismatic, unpretentious, older white male with a southern accent. It’s terrifying because these people don’t do nuance, or place a premium on the sort of worldly knowledge and restraint you’d need to responsibly run the world’s largest military.

Rick Perry seems stupid and insane too. I recently read about the governor before Bush, Ann Richards, who was a vocal feminist and a Democrat. What happened to Texas?

Ann Richards is an anomaly. Nothing’s really different about Texas. With the exception of Ann, it’s been the same string of irresponsible males only interested in money and power.

The first part of the book the narrator is trying to read Ficciones by Borges. Where did he hear about this book? Is the juxtaposition supposed to be intentional between the maximalist style of Borges and the book’s minimalist style? Do you like Borges?

In the book, Matt’s best friend writes his thesis on Borges. I tried to read Borges and his work didn’t speak to me. I think there’s pressure to try and understand art that doesn’t speak to us. I wanted to convey that pressure in the book.

Why do you think there’s this pressure to try and understand art?

I think there’s pressure to understand and appreciate art that we know doesn’t resonate with us. I can think of a lot of books that don’t interest me, but interest a lot of my peers. For a long time I’d force myself through those books and feel stupid or “out-of-touch” when I didn’t feel the same things another group of people felt.

Do you think your writing style in this book makes it more possible for people to just experience an event or a story, rather than having to analyze a certain meaning?

Yes. I want to tell a story or provide an experience. Leaving things out in the narrative helps focus on the story. I’m not trying to send you to a dictionary or Wikipedia. I want to keep the reader in the story.

What do you think of the recent events in Ferguson, MO? I ask because the narrator is from Oklahoma and lives in Texas, which I think is similar to your background. So I guess my interest is from hearing from someone in that corridor of the country.

What if I saw someone breaking into my house and I called the cops? And what if they arrived, think I’m the criminal, and shoot me? What if I got pulled over by a cop that’s having a shitty day? What if he decides only my blood will make his day better? What if a white person decides I’m playing my music too loud and he shoots me?

It feels dramatic, but these are real scenarios. It will change, but right now it’s weird and terrible.

It’s hard to understand how these scenarios exist today, when civilization is supposedly so advanced, but yeah it’s very real, and it’s very frustrating. You say it will change. What makes you think this?

50 years ago I could be killed for kissing a white woman. 100 years before that I was 3/5ths a person and women couldn’t vote. We get better as humans. It’s not always apparent, and we collectively take steps backwards sometimes, but we improve, I think.

Who are your favorite writers writing today?

Gene Morgan and Victoria Trott. Neither of them produce a whole lot outside Twitter, but it always feels very honest. I like Christine Schutt, Javier Marias, Ann Beattie.

The other main character, Vik, is from the Czech Republic. What are the one or two main differences between Czech culture and American culture?

It seems like American culture is motivated by a pioneer work-until-you-die ethos or something. They don’t have any of that. They went to high school in buildings from the 14th century. They studied languages in the third grade. They have great social programs.

How did you have your book published on Civil Coping Mechanisms?

I stayed in the HTMLgiant house during AWP. Spencer Madsen was there too. I told Spencer I had a novel I wanted to get published. He told me to talk to Michael Seidlinger. I emailed Michael, he read the manuscript. That was that.

Why did you decide to publish this book? I’m glad you did.

I worked really hard on it and thought it would be enjoyable for people to read.

I work as a writer for a large American tech company. Some days I like it. Some days I do not. Seems true with any job though, so I stay. I have a desk and a salary.

Who do you hang out with the most?

My girlfriend, Christa. She asked me, “Is that all you’re going to put there?,” and I said “Yeah.” She said, “What about your other friends,” and I said, “He asked who I hang out with the most. That’s you.”

When you were 23 years old and we invaded Iraq, did you ever think that we would still be fighting in Iraq when you were 34 years old?

I suspected. There were smart people saying we’d be there for a while, and they were right.

Anybody you want to call out or shout out?

Timothy Willis Sanders is the author of the novel Matt and Vik [CCM, 2014] and the short story collection Orange Juice and Other Stories [Publishing Genius, 2012]. He lives in Austin, TX and works as a writer for an American tech company.  More: timothypresence.com

Andrew Duncan Worthington is the author of the novel Walls [CCM, 2014] and the poetry e-book HOT DOGS! [NAP, 2014].  He is also the founding editor of Keep This Bag Away From Children [keepthisbagawayfromchildren.com]. He lives in Brooklyn, NY and works as an English and special education teacher.  More: andrewduncanworthington.com