I Just Can’t Not: An Interview with Meat Wave’s Chris Sutter 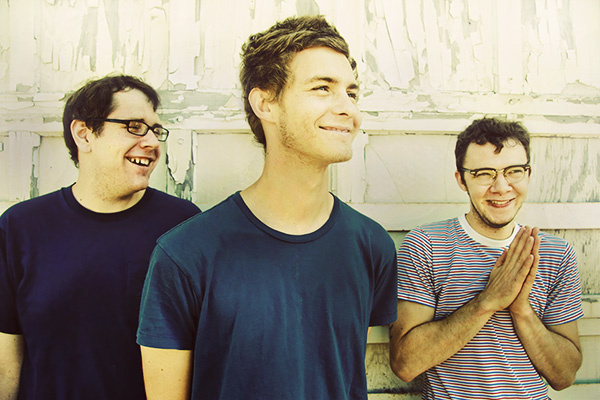 Though I don’t spend much time in the realms of superlatives, I have to begin this piece by acknowledging that, for many people invested in Chicago’s garage rock/ pop punk scene, Meat Wave is the best band in Chicago. This was true even when their self-titled debut album (self-released) was inconspicuously available for free online; now their second album Delusion Mood (out from SideOne Dummy) is loose in the world, popping up as an iTunes feature, and reviewed by platforms affiliated with such venues as Vice, the A.V. Club, and Nerdist.

You can watch music videos (made by Chicago director and videographer Andrew Morrison) for three of Delusion Moon’s most raucous singles—the title track “Delusion Moon,” “Cosmic Moon,” and “Sham King“—and you’re a click away from hearing the entirety of Delusion Moon.

I’ve known Meat Wave’s lyricist and front man, Chris Sutter, since 2012, when we met for the first time in a Logan Square living room to rehearse for a show that we were playing later that evening with another band, Everything’s Alright, fronted by Matt Engers, front man of another well-loved Chicago punk-rock group, Dr. Manhattan.

My first evaluation of Sutter was that he was made of goodness and light, so it’s been funny to see so many music reviewers characterize his voice as sneering, and his persona as “disaffected.” Of course, these reviewers are absolutely right to pick both of these qualities in Sutter’s vocal performance and lyrics.

I conducted this interview with Sutter over email near the end of 2015.

FZ: In a recent article, one journalist described you as being a “disaffected” journalism student at the time that you wrote most of the songs on Delusion Moon. Can you talk more about the causes/ character/ manifestations in your musical and nonmusical life of that disaffectedness?

CS: I’m not sure if disaffected is the right word. I think that at the time I was trying to be someone I’m ultimately not, which can lead to a lot of dissatisfaction all around. I did, however, really enjoy studying journalism. My mentor and basically biggest writing influence at school always explained that our mission was to uncover truth. Conversely, I wasn’t being honest with myself in regards to what my passion was; I was more or less driven by convention. Music has always been my passion but I felt I needed to do something conventional and maybe (what I thought at the time) more useful with [journalistic] writing. So that’s perhaps part of what some of my own delusion stemmed from. So many people are driven by convention over passion. A lot of my life I have tried to mask what I truly want or feel, and that’s really weird. I’m trying to do less of that. After writing about different levels and characteristics of delusion, I finally thought about who I was becoming and where I was going. There’s no time to not be yourself and I’m trying to really live that up now.

CS: There’s so much music happening in the city right now. The first couple of years Meat Wave started playing we would play any show we could get on (in Chicago there’s a show practically every day), and we put our music out for free. There’s so much stuff going on that maybe there’s too much. So I think it helped to just try to get out there and play to different audiences.

I started playing shows in the suburbs when I was about 14. My mom would drive me and wait until we were finished and then drive me home. I think the difference in the musician I am now and the suburban teen I was before is just time and experience. I’ve played so many unbelievably terrible shows! And so many good ones too. I think Chicago is so massive that there are a bunch of micro-scenes popping up, so it’s hard to make a general statement on it. From our experience, I’m seeing a lot of progression and pushing-the-envelope in rock music and punk and hip hop. Things are pretty positive.

FZ: I remember when I first heard (and then read) the lyrics to the song “Sunlight,” I felt it was so much more vulnerable than most of the punk songs I hear, and maybe even one of the more vulnerable pieces I’ve heard from Meat Wave. I’ve heard you describe the song as being “about the different ways that people experience sunlight,” but I wasn’t much satisfied with that explanation since I felt I’d detected something so much more urgent in the song. Can you tell me more about your life at the time you wrote that song?

CS: A lot of people can relate to being in a relationship and feeling like they might not be pulling their weight as a partner or as a friend. Time is precious, and at the time when I wrote this song I was wasting all of mine being this kind of lazy, depressed person. This song was kind of written as a turning point and a motivator for me to do better. To appreciate more. In relation to sunlight, it’s like you can lay and sunbathe all day, or you can use that light to do something productive or creative or good for someone else.

FZ: What are other (non-Meat Wave) artistic or non-artistic things you hope to be able to devote serious time to at some point in your life?

CS: I know we both share a love for film and wanting to write and direct. You were very kind to act in my short film that I did in college. Looking back on that, I think I was going for more vibe than story, which I regret; it didn’t make a good movie in my opinion. But definitely film and photography. Or just working on a film set. I’d accept any job–holding the boom, writing, getting coffee. When I’m a bit older I can see myself writing for a publication, music-related or not. I think I’ll always make music and be in bands or projects. I just can’t not.

FZ: There’s this poet in the pacific northwest who was working at Whole Foods at the time that he won a very prestigious award for his first book of poetry. You are currently working at a pizza place in Chicago’s Bucktown neighborhood. Do fervent supporters of Meat Wave ever come to visit you while you’re working? How do you feel about work, in general? (For example, I, Hannah Gamble, love work. When I don’t have any kind of work I get very depressed. However: I hate having to work one job in one building. I hate the architecture of most offices, hospitals and educational institutions so I cannot work there. I love working outside in the summer in Michigan but not in the winter in Chicago and not in the summer in Tennessee or Texas. Work makes me feel good. Too much work, like adjunct teaching in a country that prefers basketball, makes me crazy and physically sick.)

CS: Only recently have I ever gotten recognized for the band: a construction worker approached me while I was making pizza and said, “Meat Wave, right!? Playing Riot Fest, right!?!?” And I had to ask, “How do you know about Meat Wave?” I guess a guy he was working with told him. He was like the model middle-aged Chicago-bred guy. Very funny.

Work is great, I enjoy it. I think if the conditions are right, like you were saying, you can get a lot out of it. My job is really unorganized, the owners don’t care about the business, so it’s quite bad. The sole job of making a pizza is something I really like doing, and I try to just get better at it. As a human with critical thinking skills and intellect it’s easy to be dissatisfied. We’re on tour for the next two months, so I’ve been trying to think of what I want to do when we come home. I find myself quite unsatisfied sometimes and thinking the grass is always greener. So I don’t really know what’s worth doing. You need to work though.

FZ: Meat Wave has been touring an awful lot, both in the US and in Europe. In regards to some of these other places you’ve seen bits of, what have you learned? What have you been surprised by?

CS: We were super fortunate to have toured Europe and the U.K. twice this year, and we’re going to Europe and Iceland on this next tour. To make a generalization, you’re treated a lot better when you’re overseas. (I can only speak from my experience.) I’ve learned a lot about not being so judgmental and being very open to a new place. When we were in Berlin, Germany, I just felt really paranoid that everyone was going to be mean to us. I don’t know why, I’m an asshole. And it couldn’t have been more the opposite. Everyone was so incredibly nice and inclusive, it was one of the best shows on the tour. People tend to know a few languages, it makes you feel lazy. There’s generally a lot more appreciation and warmth when we go over there, and it makes it really worth it and eliminates a lot of self-doubt.