I have felt crazy at almost every point in my life: An Interview with Mallory Witten 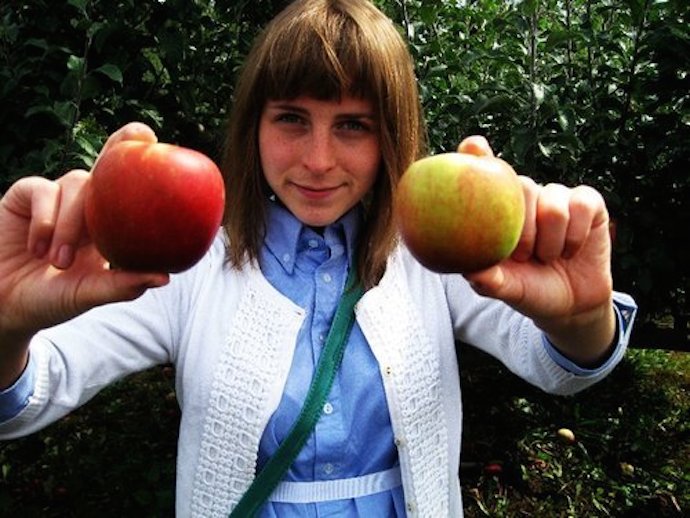 I think I found out about Mallory Whitten through her connection to other writers from Ohio, my home state, and since then she has become one of my favorite contemporary authors and artists. Her contributions to the literary website Muumuu House represent her writing talents, while her collaborative picture book with the poet Andrew James Weatherhead called The Kids I Teach, demonstrates her talent at drawing. She likes to draw minimal lifeforms and dryly report strange life experiences in short forms: short short stories, poems, Tweets. Her poems, stories, and drawings seem to sink in and absorb the world through and through them, creating an effect that make me feel sad, reflective, and happy all at the same time and at once.

Whitten’s first book came out this year and it is called Collected Stories and Poems, which is an interesting name for a first book, especially one written by a young twentysomething who is still in college. I asked her if I could ask her some questions, and she said OK, so I did.

FZ: How long did you work on this book?

MW: I wrote the contents of this book starting in 2009 up until 2012. I put all of the poems and stories into a word document in October 2013 and started to edit them with help. I sent the edited file to Monster House Press. I am not sure when.

FZ: Why or how did you decide to publish this as a book?

MW: I had let people look at the file of all the poems and stories together and they were encouraging. I like Monster House Press as a group of people, as a publishing entity, and knew they had been planning on finding their first book to publish, so I sent them mine.

FZ: Do you have other books you are working on? If so, what are they?

MW: Currently I am not planning on any more books. I could see one happening though, if I start writing a lot again. Right now I am just writing for myself, and not sharing any of it.

FZ: Would you consider authors or other authors to be influences on you? Is “influences” a term you use?

FZ: You decided to publish Tweets in your book. Did you pick some of these or did your publisher?

MW: I picked the unpublished ones, or tweet drafts, while the others were picked by the editors listed on the page of the tweets. For example, Andrew James Weatherhead picked some.

MW: Andrew James Weatherhead has my favorite twitter account, by far. I like the way that his tweets seem childlike and I want to make myself think in the voice that Andrew’s tweets are in but its hard. I like Erin Wehrenberg’s twitter account, @ErinWehrenberg, because she tweets a lot about growth, attitude, changing, self love, and other things that make me look at my behavior and grow to be happier/healthier.

MW: I think that there is a lot of people who view mentally ill people in a way that to me seems bad and hurtful. I am mentally ill. About a month ago I was hallucinating on no medications due to untreated PTSD, and have gone to the emergency room three times since then because of panic attacks or psychiatric medications I have been put on.

FZ: Is “mentally ill” a stupid-ass term or a useful term or somewhere in between or neither?

MW: I don’t know if I have an opinion on the phrase “mentally ill.” Personally I know that something in my brain chemistry doesn’t allow me to live my life without medications, without wanting to kill myself or hallucinate or being hurtful to those around me, so I view that as an illness.

FZ: What are some different times in your life you have felt crazy?

MW: I have felt crazy at almost every point in my life.

I felt crazy when I was afraid to shit because I thought buttholes could rip.

I have felt crazy when I had to quit two jobs because of social anxiety.

I have felt crazy when I had to drop classes because as soon as I got to class I would start sweating, panicking, stifling my breath, twitching.

I have felt crazy while walking around in a public place, feeling like I am an alien who gets to observe these people.

MW: I have a main creative outlet that isn’t writing, and it is drawing.

FZ: You have a story called “Why You Shouldn’t Be A High School Algebra I Teacher.” Did any specific life experience influence you to write that story? Do you think you would ever teach high school? If so, what subjects?

MW: That story was influenced by the algebra one class I was in during high school. We were horrible to our teacher and I feel guilty about it sometimes still.
I do not think I would teach high school because I know how mean I was.

FZ: Are you still in college?

MW: I am still in college.

FZ: What are you studying?

MW: I have absolutely no career plans.

FZ: What do you think makes Ohio distinct? Do you like Ohio? Why or why not?

MW: Ohio is distinct from other states in my mind because we have insane winters and beautiful summers and even more beautiful falls. If you drive an hour in any direction you can get to somewhere completely different than you were before. It is rural and it is suburban and it is somewhat urban.

FZ: Do you like Ohio? Why or why not?

MW: The people in Ohio are nicer and more real than most people I have interacted with in New York City. I love Ohio.
———

Mallory Whitten is the author of Collected Stories and Poems [Monster House, 2014] and the artist behind The Kids I Teach [Publishing Genius, 2014]. She has contributed to MuuMuu House, Thought Catalog, Unreality House, and Shabby Doll House. She lives in Ohio, where she studies Art History.

Andrew Duncan Worthington is the author of the novel Walls [CCM, 2014] and the poetry e-book HOT DOGS! [NAP, 2014].  He is also founding editor of Keep This Bag Away From Children and has recently contributed to Vice and The Fanzine . He lives in New York and works a teacher.