I Had the Egg 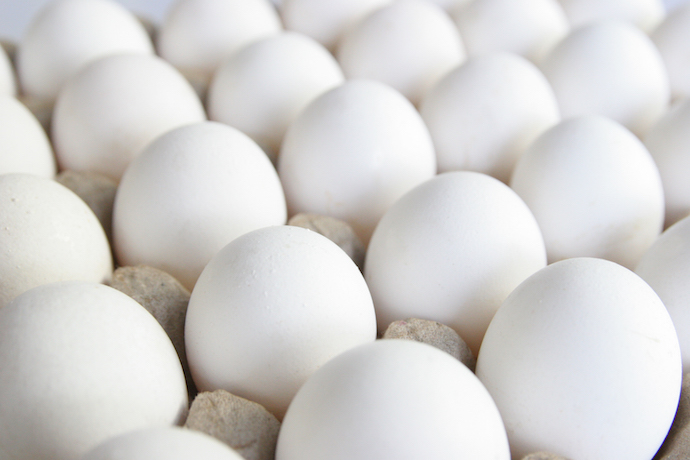 I had the egg before. Today no egg. Or rather I have eaten the egg. Therefore the egg is inside me. But can it still be called an egg? For the egg, even if one could see it, could not possibly resemble the egg it was before. Unless of course I had eaten it whole, shell and all. But would I not have gotten a terrible stomachache from doing so, even with the egg being so small? Most likely.

But I can get a new egg. For in the world there are many eggs, countless eggs, eggs are everywhere. They are in the park, for example during spring, and sometimes summer. But those are not the kind I take, and certainly not the ones I eat. I eat eggs from the grocery.

I am at the grocery. I pass others. Some have carts, others have little hand baskets. I have neither, for I am only here for one or two things, the eggs for sure, and possibly a peach or two.

I head for the correct aisle. This aisle is not called the egg aisle but even so it is replete with eggs. I buy the eggs.

I now have eggs. I have many, many eggs, and they are all in my little apartment.

I have an egg fridge, a little appliance set apart for my eggs. I study the eggs. Sometimes I eat them. Sometimes I let them spoil. Naturally I throw them, not often, but often enough, for I like to laugh.

I boil an egg. It is a chicken egg. A standard chicken egg. It is an egg that for most Americans (I mean people in the U.S.) are very familiar with, for it is rare that an American will eat some other kind of egg, and equally it’s often they eat the egg of the chicken. Never mind, I lift with an egger (I don’t know what else to call it) the egg out of the water, and I set it on the dish.

The egg is the future. I lick the egg. I like the way it gives. I have to salt it more, pepper it more, for I have licked off much of both. But I have other spices, even herbs. Even so I don’t use them.

Someone calls. I know because I can hear the faint music, the low volume of the phone I keep beside the couch, I mean on the little table beside the couch, which I also put my lamp upon, and often put a book upon, for the table has not been set apart for anything. I push the little green button and wait. I don’t say anything and hardly breathe. This is my signal that I’m waiting. I roll the egg around my plate. I begin feeling hungry, for I have not yet that night had an egg, I mean put one in my gullet. “Hello?” says my grandmother, unless its someone else, a mimic. But I doubt it. “Hi,” I say.

I am not opposed, not entirely, to an ordinary conversation, or even an ordinary egg, even so I like to move things along, shake things up. I put the egg, all of it, in my mouth, and wait.

She’s outside, I assume. I go to the window. I have to open the window, for I have not yet learned to put my head through it, I mean with it down. I latch the window, for otherwise it will not stay up. Even so I put myself at some risk of doing so, for the latch could fail. I need a latch for the latch or perhaps a better latch. But I do not die. I see the woman, at least from above. She looks up. She waves. As usual she is scantily dressed. She’s got on her fishnet stockings, I can tell because she bends over to pick up a newspaper. It’s not mine, it’s someone else’s, but she is bold. And she has taught me well.

I buzz her in.

She arrives quickly, as usual, faster than seems possible, given that the place has no elevator, only stairs, a long, winding staircase, hand railed and creaky.

I unlock the door and she waltzes in.

I have finished the egg and so am prepared to speak. But right away I don’t.

She jiggles, she jiggles herself. I hold her still. I do so by grabbing her by her arms, her upper arms, not roughly, but gently, but firm enough to stop the jiggling, and to compel her to look me in the face, the eyes.

To speak would break the spell.

I break the spell.

I let her go and she cups her hand. In her hand there is nothing. But what is conveyed is an egg, a little egg. And she dances about this way, I mean with her hand cupped, the invisible egg perhaps in danger of falling.

She is a chicken with her egg, I mean a hen. And I am a rooster.

The sun has fallen and the apartment gets very dark, for we have yet to light the candles. But I sit with my Ruth on the couch, her with her arm around my waist, and mine around her shoulder.