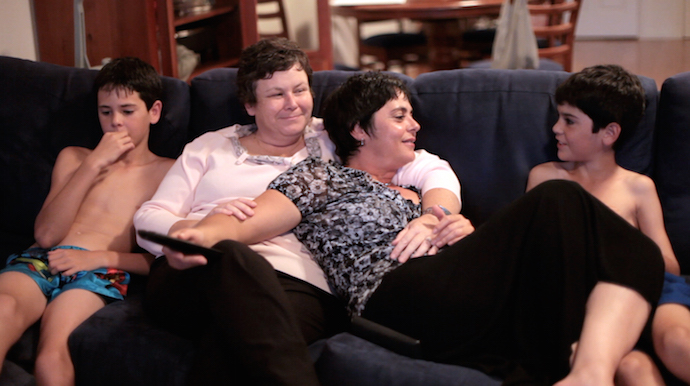 Matt isn’t sure if he still believes in God. Graham struggles with his homework and has trouble adjusting to his new school. Ebony auditions for a performing arts program and hopes to become a famous singer. Gus loves WWE wrestling “more than every teensy little grain of sand in the world.”

These are the four charismatic kids at the center of Gayby Baby, Australian filmmaker Maya Newell’s achingly empathetic documentary about growing up with same-sex parents. All of the children in the film are around the age of 11, as Newell wanted to capture “that beautiful cusp between adulthood and childhood—when you’re beginning to have a vision and opinions about the world.” I met Newell and producer Charlotte Mars—coincidentally on International Family Equality Day—at The Center, New York’s LGBTIQ+ community outreach. “Any younger than that [age] and we worried that people would think we were using kids for a political agenda. It was really important to us that these children had agency,” Newell said.

Raised by two moms herself, the impetus for the film came from Newell’s desire to address Australian politicians and public officials who warn about the “potential dangers and damage” of growing up in a family headed by same-sex parents. “I can’t tell you how many times I’ve heard public figures repeat the argument that marriage is about having kids, and kids need a mother and a father,” Newell said. “People were talking about us as though we’re hypothetical. And even though in Australia gays can’t legally marry, they’ve been having kids for generations already—it’s not a new thing. My moms have been together for 30 years.” Rather than make a documentary about marriage equality, Newell and Mars sought to focus specifically on the kids in these families, to stay imbedded in their stories, hopes, and desires. “We wanted to make the film that would give a voice to this new generation of children,” Newell said. 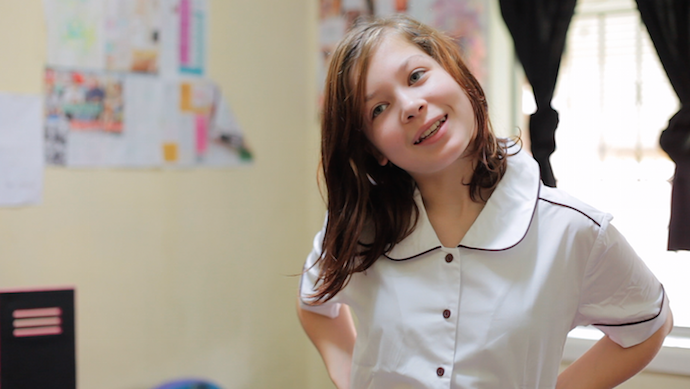 The voices Matt, Graham, Ebony and Gus are busy developing are by turns hilarious, profound, and touching. They speak with total candor and nothing about their personalities feels contrived or overly precocious—a testament to Newell’s patience and minimally evasive style of filming. “Moses, Moses, Moses,” Matt grumbles as he flips through the children’s Bible stories his mother has urged him to read. Later, he asks her pointedly, “Why do you go to a church where everyone thinks you’re a sin against God?”

Ebony’s mother insists that she will get into Newtown, a prestigious performing arts school in a neighboring suburb. But what if she doesn’t, Ebony wonders? She absolutely will, her mom insists. “Don’t we need a backup plan?” Ebony asks, so pragmatic and mature.

When Gus gets into trouble for roughhousing with his little sister, the two of them attempt to appease their moms by creating a set of safer wrestling moves. “No weapons,” Gus suggests as his mother types up the document on the home computer. “No punching, just hitting,” his sister cheerfully offers.

Graham’s storyline is the most heartrending. When he came to his family through adoption at the age of 5, he was tremendously delayed and had not yet learned to talk. Through years of therapy and tireless patience, his dads worked to help him catch up with his peers. It is especially devastating then, to see them coach Graham into lying about their family. They have recently relocated to Fiji, where homosexuality is (at the time of filming) illegal. “Lying is sometimes good and sometimes bad,” Graham says, parsing the potential dangers that threaten his family, trying to better understand why his dad now wants to be identified in public as his babysitter.

Though the goal-oriented structure of the four narrative threads feels a bit forced at times, Newell succeeds in making us empathize and root for these kids, not because of the configuration of their families, but because we can’t help but be moved by them at this tender stage. Gayby Baby swells with everyday beauty: the car rides and the homework, dinners and dishes and bedtime stories, the dazzling minutia that makes up a life. Newell is particularly gifted at capturing the incandescence of youth when nothing much is happening—kids bouncing on trampolines, kids walking home from school, kids reading under the covers by flashlight.

The families in Gayby Baby are by no means perfect. Newell wanted to avoid “poster child syndrome”—the impulse to prove that same-sex parents are worthy by depicting them and their children as flawless role models. “We wanted to show parents who sometimes yell or make questionable decisions,” Newell said. “We wanted to show families learning and laughing and making mistakes.” Though none of the families come across entirely unblemished, the sibling relationships here are particularly robust and endearing. We see Gus help give his little sister a bath—all the while quizzing her about her favorite wrestlers—and we watch Ebony pick up and soothe her crying baby brother.

Gayby Baby has an activist bent, but its subtlety and unforced intimacy make it more of a broad commentary on childhood than an issues movie. The fact that these households have same-sex parents becomes less and less important over the span of the film, and this is the point. It’s a gentle rebuttal, a quiet and effective way to rewrite the narrative of the stereotypical family. Though the camerawork isn’t particularly revolutionary, the trust and closeness Newell achieves in Gayby Baby calls to mind Rich Hill, the luminous 2014 documentary about three impoverished families in rural Missouri. Both films have a knack for capturing the rhythms and rituals of daily life—moments the poet Jack Gilbert referred to as “between the memorable”—and both treat their subjects with the utmost sensitivity and respect. 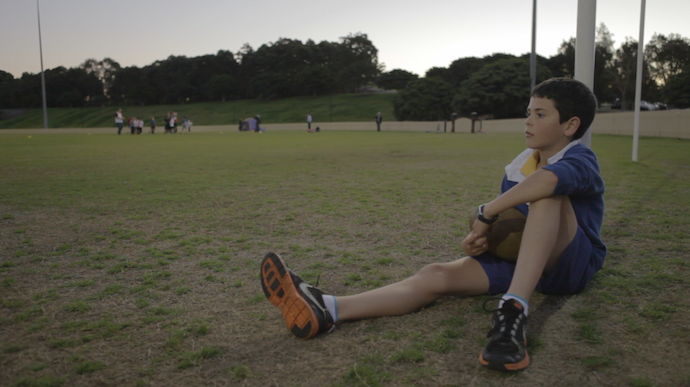 This veneration and reverence even seeped into the composition of the film, Newell explained. “We did something quite unusual—we involved all of the families in the editing process and in the creation of this story. They were given the opportunity to be a part of deciding how they wanted to be represented. That meant they were watching cuts throughout the edit, they were a part of the conversation. I don’t think that decision [to include them] really changed the story. It meant that we all had ownership of the story…I wouldn’t want to make a film like this any other way.”

So how does the release of Gayby Baby affect audiences differently here in the United States? Producer Charlotte Mars said the mission of this film remains critical, even in countries where gay marriage is legal. She hopes Gayby Baby “can be one of many films that starts the conversation that comes after marriage equality. Which is more about ‘How do we check the haters on the streets and in schools? What are the stories that need to be told to make the community safer?’” To see this film is to fall in love with these kids, to want them to succeed, to protect them from harm.

Newell hopes the conflicts and resolutions depicted within the families here will convey a kind of microcosm for understanding bigger societal differences. “Within every family there are conflicts. This is a film about how we can deal with those conflicts—have different opinions from the people we love—but still be a family. Hopefully when you zoom out, it’s how we as a society can work through conflict and still love each other, even while having big differences of opinion.”

Gayby Baby can be streamed online through many popular services including iTunes.