HOW TO START A FIGHT CLUB 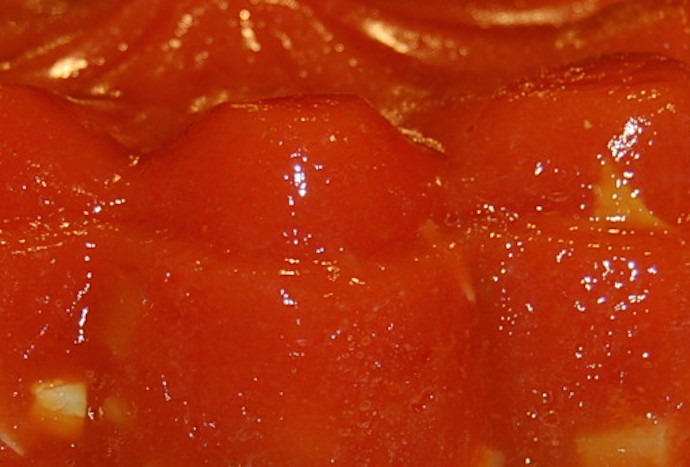 At dawn, we carved our fruit into rectangles, slid them into white jewelry boxes. There were three: watermelon, orange, and apple. The watermelon and orange were pleasurable, while the apple gave us trouble because its cores were not flesh-like. So we replaced them with foam, then spray-painted and injected the foam with juice.

These boxes of fruit you weren’t supposed to eat, although some people did anyway. A discreet following refused to eat their fruit any other way.

The new person held an apple box between his fingers, piercing its foam core with a syringe. The way in which he handled the apple felt surgical to me. I considered what Chef had called him: “skilled, but languid, better suited for a piano factory.” Piano factory was how he referred to my operation, with its dusty felt fingertips and fine wood contraptions.

Later that day, we toured the facility where the fruit ripened, a hodgepodge of fiberglass and tin. Its air was hot and smelled like vomit.

“Why apples?” The new person asked.

He snatched one from the shelf. “What does it mean if your apples are actually foam?”

I stared until I could no longer see his face. I’d developed this practice as a kid, but with words. The latest was crime. Crime was now a black hole, a nothing.

He ground the apple’s leathery skin inside his mouth.

“What’s the sound of foam?”

“There are no words for it.”

I didn’t attempt to ward off my thoughts: most men lie there if no one’s looking. Lobsters are more passive than we think. Black cats with white dander are the first to be euthanized.

“Do you prefer people or animals?” I asked.

“I prefer plants, but only if they’re cooked.”

At night, we kept watch for possums. We slept in three minute spurts, propped on the couch, foreheads against the window screen. I held my shotgun on my lap.

I admit it was a strange way to live, but sleeping with one eye open was just another way of sleeping.

Chef possessed a third eye. He could see me licking his chocolate mousse deep inside the walk-in freezer, even with its metal door shut. That night, the lobster was punished for my sneaky theft; halved by one thrust of the knife. It scampered on the plate, attempting to reassemble.

“Crimes occur where rodents are permitted,” I told the new person.

“What about rodents of the sea?”

“What would you consider a rodent of the sea?”

“Aren’t they analogous to insects?”

“They live somewhere in between.”

I used to spend too much time at the lake, watching the rats claw through soggy bread intended for the ducks.

Often, I’d trap a rat and bring it home, just to witness what someone would do with a thing so useless as a boxed piece of fruit.

The rat would remove the lid, devour the fruit until only the foam remained, then build a bed.

The following night, I accidentally fell asleep. When I awoke, the new person was stationed at the butcher block, carving watermelon with an Exacto knife. This time he was wearing white gloves, the Easter Sunday sort. A saint, it seemed; he must have been very dirty on the inside.

Perhaps he carried more than one disease. My spine hosted a colony of uninviteds, but only Chef, who had his own party to contend with, was privy.

In the restaurant kitchen, we’d gossiped about which of our viruses were interested in one another. We named them. The staff thought we were each entertaining foreign travelers. One night, after the dish washers, prep cooks and the smarmy sous chef had gone home, Chef asked me to hold a block of aspic while he fucked it. He handed me $500.

I still imagine my body turning into aspic every time I come.

We did this several times a week. Within a year, I’d saved enough to start my own business: Fruits cut into blocks, packaged in white jewelry boxes.

By then, Chef had opened his own restaurant; a dark, dainty place, where diners were handcuffed to their chairs and licked their meals from elevated plates. Between each course, a palate cleanse: a boxed fruit: watermelon, orange, apple.

When I visited, Chef had not been happy to see me. His wife and financier was playing hostess.

“Separation of church and state,” he told me.

“Which do you think?”

At nightfall, I drank a pint of espresso, stationed myself on the couch, shotgun on my knee. I stared into the murky backyard. Things were happening, but I didn’t know which things.

A possum twitched; I blew a hole through the screen.

“You seem on edge,” the new person said.

I left my gun and strode into the kitchen, where he stood against the chopping block, cutting a cock-sized circle into the center of an apple.

“Don’t act like it’s the first time you’ve done that,” I said.

“Apple is not as good as aspic.”

I studied his face; the gash in his brow, the thready eyes.

“Okay,” I said. “You can accompany me, but only for a little while.”

The chef’s restaurant was located in the garden apartment of a row-house. You rang a dinner bell on a chain, then a doorman would decide whether you were to enter. I would not be permitted.

We crept through the alleyway to a window obscured by a yew shrub. Kneeling, I peered into the dining room: a sparsely furnished room with four candle-lit tables, four couples tied to their chairs by thin leather strips, wrists behind their backs.

Chef strode through the room in his full suit of arrogance. I choked; it had been a year since our nights of aspic.

Nothing in me had changed.

“Actually, this could take forever,” I said.

“Forever may not be long enough.”

With my bare knees, I carved a trench into the dirt. It was a trench in which insects would squirm and secrete, rodents would deposit their droppings, and I would wait for that kitchen door to open. Eventually, someone would act carelessly and I’d squeeze myself in; I’d always squeezed myself in. I knew how to fit into spaces tight enough for only the smallest animals, no matter their kingdom, no matter how careless we were.

Vanessa Norton lives in California. Her work appears or is forthcoming in StoryQuarterly, Gigantic, Whiskey Island, Hobart, Spork, Wag’s Revue, the anthology Sex for America, edited by Stephen Elliot, and elsewhere. She is writing a short story collection and a novel.