HER COMPANY: A REVIEW OF C.D. WRIGHT’S THE POET, THE LION… 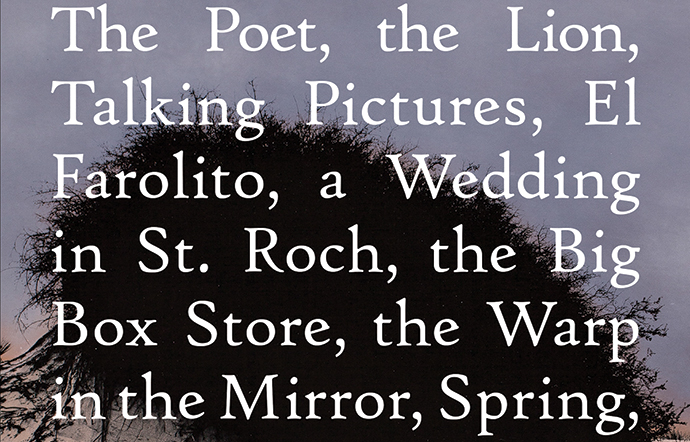 C.D. Wright’s second collection of essays was published only a week before her sudden passing. She was at the height of a career that over the past few decades defined the emerging genre of documentary poetics and the ongoing ethical and formal renovations of the lyric. Her poems were infused with a blend of cool intelligence and Southern vernacular. Her collaborations with other writers and artists, particularly photographer Deborah Luster, invigorated poets to think outside of their own heads, pages, and words. But (or maybe because of this) she retained a deep appreciation for language. “It is a matter of faith on my part, that the word endows material substance, by setting the thing named apart from all else,” she writes in the first brief section. “Horse, then, unhorses what is not horse.”

Had this book’s publication not been coincident with Wright’s death, it might be read as a companion to 2005’s Cooling Time, an eclectic batch of close readings of contemporary poets, reflections on the state of poetry, notes on American English (particularly of the South), statements on her own poetics. We could read it as another grab-bag of essays, gesturally woven, with a sprawling title to match its architecture. As it is, however, I cannot help reading the book as a retrospective or send-off: words to steel us against the loss of the poet, to assure us that the state of poetry is not as bad as they all say it is (at least not yet), that the genre will persist, that maybe it is needed now more than ever, and that her work will live on in the community of writers and readers that continues to form around it.

What comes forward most poignantly, in a way it would not have, is Wright’s recursive meditation on the 2005 death of Robert Creeley. The reverent tone of her description of Creeley—extolling him as a father watching over the family of American poetry—might at first seem antiquated, even off-putting:

But what is remarkable about these passages for me, now, is that they could very easily be describing Wright’s own legacy. I remember going to Harvard’s Woodberry Poetry Room in 2013 for a reading of poets from the Arcadia Project, an anthology of ecopoetry. Timothy Donnelly, Gabriel Gudding, Dana Levin, John Beer, Dan Beachy-Quick, Brian Teare, and Wright all read. It is hard to explain exactly how—her touch is so light and self-effacing—but she presided over that event. Later in the book Wright writes of Creeley’s notion of “the body politic of poetry,” which he called “the company”: “We are also his company, and his persistent voice made us and has kept us so.” We are also Wright’s company.

The other major figure in the book, a kind of counterpoint to Creeley, is Jean Valentine. Her work and influence is treated very differently: it is less the cultural impact of Valentine’s poetry that seems to concern Wright, but instead her poetics, how the poems do what they do. It is clear that Wright feels a deep affinity for Valentine’s work, especially the particular affective pitch that her poems achieve. But she gets at her poetics not with the blunt incision of interpretive claims, but rather with the care and humility one would use to describe a close friend. “I think I see what Valentine sees: her own outline and what has settled below,” she writes at one point, “But I am wary of describing it.”

Wright winds up tracing a perspectival outline of Valentine’s work that proceeds through close readings of isolated lines, analogies between the poetry and visual art of Agnes Martin and Anne Truitt, the tracing of her symbolic and linguistic universe. She suggests that Valentine organizes affect in her poems the way that Martin and Truitt organize color: “she is organizing her emotions, in color terms, by their value—that is, by the darkness staved, the light given off.” The shades are subtle: “Valentine’s palette is mostly grey.” It is no accident that Wright turns to two female visual artists to describe Valentine’s work. “These are poems only a woman could write,” she claims. “Poems that could issue only from the womb of a woman-mind.” Ultimately, the difficulty of summarizing Wright’s notes on Valentine is made even harder by the book’s construction, which divides the various meditations into brief sections and weaves them across the book. This slows down its reading and invites closer attention, and also encourages us, I would argue, to constantly look outside of the pages of the book, to find online (or off our shelves) poems by the constellation of writers on whom she turns her affectionate lens. Jane Miller, Brenda Hillman, John Taggart, and Raúl Zurita all receive close attention, alongside a host of other writers quoted or mentioned (Forrest Gander, Martha Collins, Arthur Sze, William Carlos Williams, Marianne Moore, Muriel Rukeyser, Paul Celan…).

The persistent theme that drives this eclectic assembly is an articulation of why poetry matters. As I was working on this review the United States elected its least qualified president in its history, who gained enthusiasm with sexist, nativist, bullying rhetoric. Around the world, the logic of unbridled capitalism continues to devalue human life, drive people into debt, control and exploit bodies in prisons, fuel wars over natural resources, and distract us from the carnage with shiny, fetishized objects. Can poetry somehow save us from this world? In “Concerning Why Poetry Offers a Better Deal Than the World’s Biggest Retailer,” she writes:

As Leonard Cohen puts it, poetry is the opiate of the poets; but therein the circle threatens to close in on itself, and thus the boundaries begin to harden. And herein lies Walmart’s great advantage: ever growing. And herein lies poetry’s endurance: determination at the core.

Wright is not one to offer pat optimism or easy resolutions. But at the core of her writing there is determination. She retains a faith in poetry as a corrective, delivered with an emboldening clarity, humor, and earnest striving. “I say, teach your kids to read poetry,” she writes. And later, “keep a big-box sense of humor at the ready.”

Within months of this books release, one of Wright’s former students, Ben Lerner, published a book-length essay on a similar theme, which (with a punchy title and tweetable thesis) made a bigger splash. His book, The Hatred of Poetry, argues that poetry remains such an enticing, intimidating, and frustrating art form because it promises to accomplish an impossible feat: communicate experience in a way that is at once singularly particular and wholly universal. At one point, Lerner, echoing the protagonist of his first novel, talks about how poetry is most beautiful when quoted in critical prose essays because it gestures to poetic possibility without relinquishing the inevitable failure of the full poem. Thick with quotation, Wright’s book delivers this pleasure in spades. It sketches a theory of poetry that, like any great love affair, never stands still, but that insistently asks the world of the word: “That they bring the ship nearer to its longing./ That they resensitize the surface of things./ That they resonate in the bowels.”